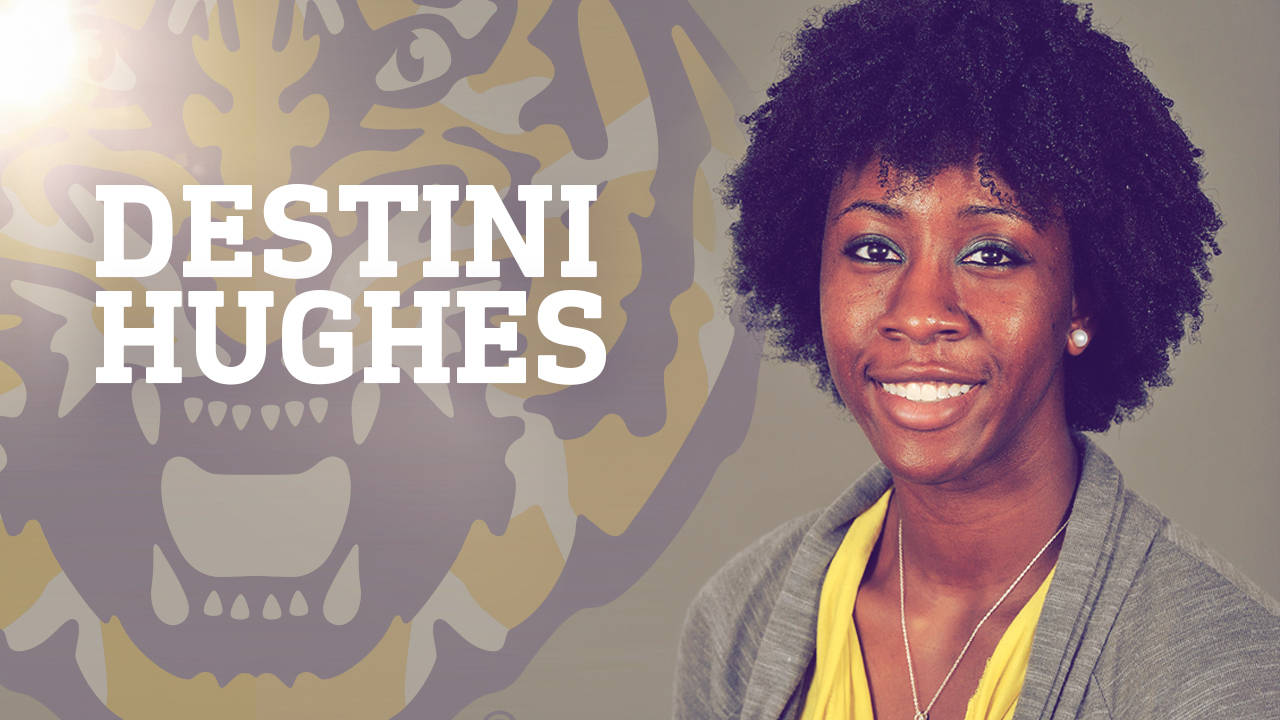 Hughes played for the Lady Tigers from 2008-12 and served the last two seasons under head coach Nikki Fargas as a graduate assistant. Hughes earned her master’s degree in communication studies this spring and maintained a 3.736 grade point average in graduate school. She was part of four NCAA Tournament teams at LSU, three as a student-athlete and one as a graduate assistant, and completed her career with 370 points, 207 assists and 110 steals as a point guard.

“We are thrilled that Destini will begin her collegiate coaching career after completing her master’s degree at LSU this spring,” said Fargas. “Destini has worked extremely hard to put herself in position to enter this profession and we are so proud of her and wish her all the best at Quinnipiac.”

A native of Fort Worth, Texas, Hughes received her bachelor’s degree in animal, dairy and poultry sciences in December 2011. She was working in a vet clinic with the intention of pursuing veterinarian school when offered the graduate assistant positon at LSU. She has also assisted with various LSU and AAU/high school summer basketball camps the last eight years.

“Working with Coach Nikki and her staff has been such a blessing and I’ve learned so much that goes into coaching that you never see as a player,” explained Hughes. “I am really excited and grateful to have had such an amazing opportunity to learn and grow from Coach Nikki and her staff. The experience I had at LSU as a player and as a graduate assistant has prepared me to embrace my new role as an assistant coach at Quinnipiac, and I will always be thankful to Coach Nikki for giving me the opportunity to start my career under her.”

Quinnipiac, which competes in the Metro Atlantic Athletic Conference (MAAC), closed out the 2015-16 season with a 25-9 overall record and a 17-3 league mark. The Bobcats lost to Temple in the second round of the WNIT. The team’s WNIT opening victory over Maine marked the program’s first-ever national postseason win. Quinnipiac is coached by Tricia Fabbri, the all-time winningest women’s basketball coach in Bobcat history, who recently completed her 21st season with the program.

“I have always known in my heart that I wanted to serve as a mentor and I know that coaching is the perfect platform for mentorship,” said Hughes. “Quinnipiac is a great program with an amazing history, especially in women’s basketball. I am so honored to work and grow under Coach Tricia Fabbri and her staff as a young coach, and I am extremely thankful for the opportunity Coach Fabbri has given me in becoming part of the team.”

The Tigers participate in a video shoot as the 2022 season draws closer.
Swimming and Diving Senior Day Tribute