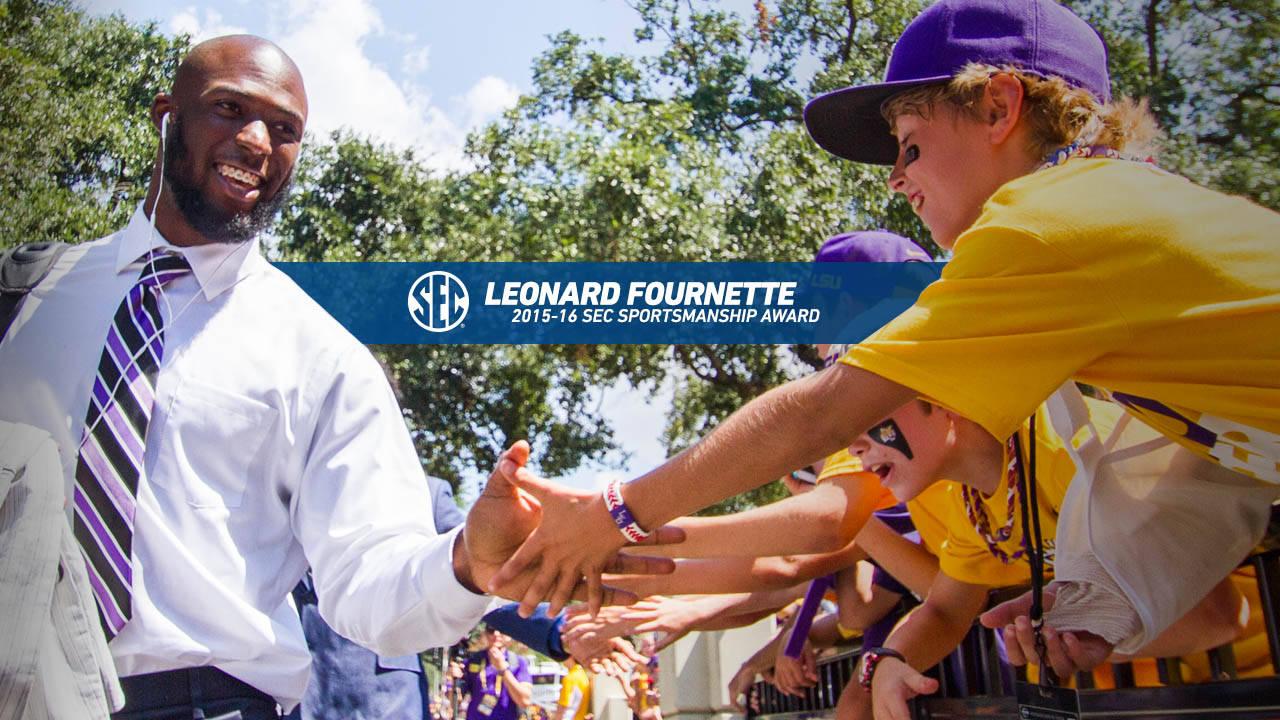 BIRMINGHAM, Ala. – Leonard Fournette, LSU’s record-setting running back, has been named the men’s recipient of the 2015-16 SEC Sportsmanship Award, the league office announced on Thursday.

Fournette joins women’s recipients Lloydricia Cameron of the Florida track & field team and the Kentucky Volleyball team and support staff as the winners of the honor, which is being awarded for the ninth time. The honorees were selected by a vote of the SEC’s 14 Directors of Athletics.

“There are many stories of sportsmanship and generosity on the part of Southeastern Conference student-athletes, and these three stories are indicative of a spirit that is pervasive in the SEC,” said Commissioner Greg Sankey. “We are proud of Leonard, Lloydricia and the Kentucky volleyball program for setting a standard of sportsmanship and exhibiting that spirit that lives in the heart of SEC student-athletes, coaches and staff members.”

Fournette of LSU earned the men’s SEC Sportsmanship Award for his actions in support of the people of South Carolina after unprecedented flooding in that state.

LSU’s scheduled road game against South Carolina was moved to Baton Rouge due to the flooding, reminiscent of the devastation in New Orleans that Fournette experienced in the wake of Hurricane Katrina. During a live on-air interview with ESPN following LSU’s game against the Gamecocks, Fournette announced to the nation that he would auction his jersey from the game to help the flood victims in South Carolina. The jersey auction was approved by the NCAA and raised $101,000, the most ever generated for an auction by an active college student-athlete.

“We are very proud of Leonard and the role he played in raising awareness and generating money to aid the victims of the devastating flooding in South Carolina last fall,” LSU Vice-Chancellor and Director of Athletics Joe Alleva said. “This is a tremendous honor for Leonard and one that is every bit as important as the accolades he’s earned for his performance on the football field.”

In addition to this prestigious SEC honor, Fournette capped his sophomore campaign at LSU by setting the school’s single-season rushing record with 1,953 yards to go along a school-record 22 rushing touchdowns. He rushed for 200 or more yards four times in 2015 and earned first team All-America honors as well as being a first-team All-SEC selection.

“I’m very appreciative and humbled by this award,” Fournette said. “After suffering through Hurricane Katrina as a child and the devastation that it brought to my hometown of New Orleans, I somewhat understood what the people in South Carolina were experiencing. I wanted to do anything that I could to help make a difference and I appreciate LSU, the SEC and the NCAA for allowing me to raise money and awareness by auctioning my game jersey from the South Carolina game.”

Lloydricia Cameron of Florida was named co-winner of the women’s SEC Sportsmanship Award for her honesty and integrity concerning her mark in the discus competition at a track and field meet.

At the Tom Jones Memorial Invitational, Cameron was credited with a mark of 57.11 meters in the discus throw. Florida social media accounts posted a graphic with the mark, noting it was the No. 2-ranked throw in program history. Cameron saw the graphic and immediately went to the Gator throws coach to inform him the mark was incorrect. The throw of 57.11 was in fact foul and Cameron insisted her mark be changed to her next-furthest throw, which was 55.14 meters. The original mark would have ranked her in the nation’s top 10, but the corrected mark put her at No. 16 in the country.

The University of Kentucky volleyball team and support staff was named co-winner of the women’s SEC Sportsmanship Award for their care of an injured LSU volleyball player.

During a pre-match warmup period, LSU senior Cati Leak suffered an ankle dislocation that was originally thought to be a compound fracture. Led by Kentucky athletic trainer Katy Poole, UK Athletics personnel leaped into action, providing immediate medical care and assistance to Leak’s parents. UK personnel stayed with the family at a hospital throughout the medical evaluation period, and then provided hotel rooms to the family when it was determined surgery would be necessary. UK personnel remained with the family and Leak in the aftermath of the successful surgery.

In a follow-up gesture, Leak was honored at LSU’s senior day three weeks later when Kentucky visited Baton Rouge. It was agreed upon by the teams to allow Leak to serve the first point of the match. UK deferred first serve to enable Leak to have the first serve of the match.

This Week: A report on MLK Day community service projects; highlights of the women’s basketball win over Vanderbilt; a profile of new volleyball head coach Tonya Johnson; a look at the research of LSU astronomers and a visit to the new military museum in the Memorial Tower
Live at 5:30 p.m. CT: LSU Men's Basketball at Alabama