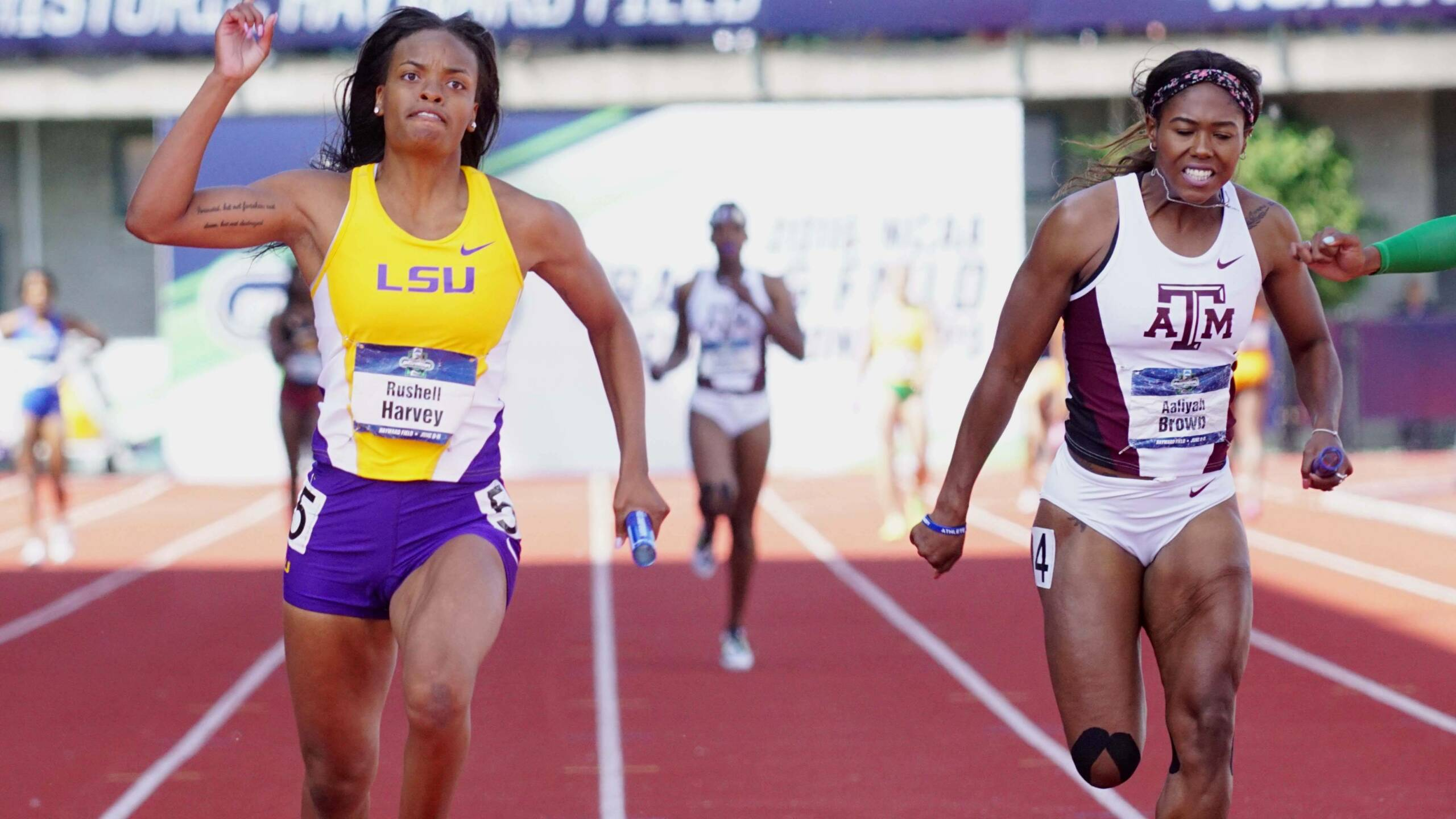 EUGENE, Ore. – The Lady Tigers wiped their own 20-year-old Hayward Field record of 42.76 seconds from the record books when they opened Saturday’s women’s finale at the 2016 NCAA Division I Outdoor Track & Field Championships with a title-winning run of 42.65 that fueled a sixth-place team finish on the final day of the collegiate season.

LSU’s sprint relay team smashed the Hayward Field stadium record in the 4×100-meter relay for the second time in as many days after the Tigers took home the men’s event title in 38.42 on Friday night.

Sophomore Mikiah Brisco, freshman Kortnei Johnson, junior Jada Martin and junior Rushell Harvey had already been crowned the SEC Champions in the event with their previous seasonal-best time of 42.77 to rank as the No. 2 team competing at the NCAA Championships this week. They became the fastest collegiate relay team in 2016 while winning the national championship with the 11th-fastest time in collegiate history.

Martin joined Chase on LSU’s fourth-place 4×400-meter relay as they teamed with two first-time All-Americans in freshman Rachel Misher and junior Travia Jones in running a seasonal best of 3 minutes, 29.82 seconds. Brisco also returned for an All-American fifth-place finish in the 100-meter final after leading off the Lady Tigers to the NCAA title in the 4×100-meter relay in the opening event of the day.

Junior middle distance runner Morgan Schuetz put two points on the board for LSU herself with a seventh-place finish in the 800-meter run while lining up in her first career NCAA final in the two-lap event.

With junior Rebekah Wales also earning All-American honors with a sixth-place finish in the javelin final on Thursday night, the Lady Tigers cracked the Top 10 of the final women’s standings with 31 points scored in two days of competition at Oregon’s Hayward field, an improvement of five places and five points from their total of 26 points for 11th place in the team race a year ago.

The Arkansas Razorbacks won their first ever NCAA Outdoor team championship on the women’s side as they tallied 72 points to finish 10 points clear of defending champion Oregon in second place with 62 points. The Georgia Bulldogs placed third with 41 points, followed by Texas in fourth place with 36 points and Texas A&M rounding out the Top 5 in fifth place with 35 points scored in the championship.

“I didn’t really know coming in if we had a top-10-caliber team on the women’s side with such a young group,” said LSU head coach Dennis Shaver. “The potential was certainly there, but we knew they needed to have two pretty good days to be in that mix in the end. They did really well today from winning the (4×100-meter) relay all the way through to the final event.”

The Lady Tigers won the sprint relay title from the gun thanks to a blistering leadoff leg by Brisco as she erased the stagger to USC’s Destinee Brown running to her outside in lane six. Johnson extended LSU’s lead over the backstretch as she gave way to Martin on the third leg before Harvey brought home the title after a clean pass at the final exchange.

Harvey crossed the finish line with a new Hayward Field record of 42.65 to win LSU’s 14th NCAA Outdoor title in the event all-time and erase their own 20-year-old stadium mark of 42.76 set in the 1996 NCAA final.

The ladies of @LSUTrackField leave no doubt with new Hayward record of 42.65 in the women’s 4×1. Live on @espn! pic.twitter.com/xDRVqXjZOc

While the Lady Tigers were crowned champions in the event, USC followed in second place in 42.90 with Oregon rounding out the medalists in third place with a time of 42.91. Texas A&M also broke 43 seconds at 42.95 for fourth place, while Kentucky finished fifth at 43.02, San Diego State trailed in sixth at 43.68 and Florida finished off the scorers in seventh place at 44.11. Tennessee did not finish the race.

“There wasn’t a lot of people around me when I got the baton, so it was really exciting,” Harvey said. “All I had to do was finish. My teammates did all the work. Not getting to our finals was the biggest motivation for us today. We had high expectations when we came here this week, but things happen. Coach (Dennis) Shaver just told us to regroup and get ready for the 4×100.”

LSU’s athletes have been crowned kings and queens of the 4×100-meter relay throughout the history of the NCAA Championships as they swept titles in the event for the fifth time in school history after also doing the double in 1992, 1993, 1994 and 2003. LSU remains the only school in collegiate track and field to sweep the men’s and women’s sprint relays as no other program can make that claim.

After leading off the Lady Tigers’ winning 4×100 relay, Brisco earned her first career All-America honor in the 100-meter dash as she ran the fastest race under all conditions in her collegiate career with a wind-aided run of 11.13 (+2.6) for fifth place in the final. Oregon’s Ariana Washington (10.95w) edged San Diego State’s Ashley Henderson (10.96w) at the tape for the win, while Brisco also followed Texas’ Morolake Akinosun (11.07w) in third and USC’s Tynia Gaither (11.08w) in fourth.

Chase emerged as the team’s leading point scorer in her final NCAA Championship as a Lady Tiger as she first ran a career-best wind-aided time of 12.90 (+3.8) for sixth place in the 100-meter hurdles before eclipsing 55 seconds in the 400 hurdles for the first time in her career with a 54.94 personal best for fifth place with the third-fastest time in school history.

The women’s 400-meter hurdles proved to be one of the deepest events in this year’s NCAA Championship as Texas A&M’s Shamier Little defended her title with a World-leading time of 53.51 in the final.

“That event was so strong this year. It was surprising to see one through five be under 55 seconds,” Chase said. “The No. 1 time in the world was run in that race. It was just a really tough race. I was happy to get the PR that I got. I needed to run that fast to even finish fifth today, so I’m just happy to get that PR.”

Thankful for the PR …. It doesn’t stop here!

They were the Lady Tigers’ first All-American relay team as NCAA scorers in the event since LSU earned a seventh-place finish in the national final on the same track at Hayward Field to close out the 2013 season.

“It’s an indescribable feeling, I just ran for the girls,” Chase said of her performance on the day. “I’m happy with the result. I think everybody did really well today. It’s my senior year, and I’m so thankful that I came out a much better athlete than when I got here. I thank all the coaches, trainers and everybody for what they do for us. I’m just happy.”

Saturday’s finale at the NCAA Championships also saw Schuetz take to the track in her first career NCAA final in the 800 meters as she raced against the nation’s best and took home All-America honors with her time of 2:03.72 for seventh place nationally this season. Three times an NCAA semifinalist in the event both indoors and outdoors the last two years, Schuetz scored two points down the stretch to help secure their sixth-place team finish and return to the Top 10 for the 10th time in 11 seasons.

“I’m proud of the effort we saw from this team over these two days,” Shaver said. “It gives us a lot to look forward to in the coming years. Chanice (Chase) has been such a big part of our team this season, especially in the championship meets. We’re certainly going to miss what she’s given our team. We have a great group coming back and a great recruiting class coming in, so we’re already looking forward to 2017.”

These are some amazing young women… I am so proud of you all…GIRLS ROCK!! Geaux Tigers…🐐!! pic.twitter.com/vRDFLt1zej