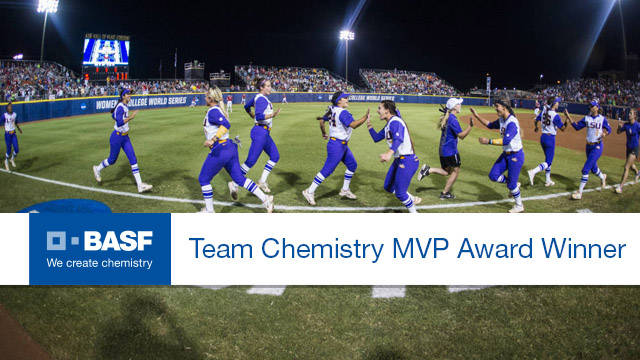 BATON ROUGE, La. – After winning two games on the road in a thrilling super regional and qualifying for the Women’s College World Series for the fifth time in program history and second-straight year, the LSU softball team earned the BASF Team Chemistry MVP Award for the month of May.

In a season that saw the team close the regular season winning 13 of its final 15 games and make the final of the conference tournament in Starkville, LSU was able to go on another run in the postseason, dropping just one game in the national tournament and reaching the 50-win plateau for the 11th time in 20 seasons, and in consecutive years for the first time since 2006 and 2007.

Earning the nation’s No. 10 overall seed when the 2016 NCAA Softball Championship bracket was released in early May, the Tigers earned a home regional where they defeated LIU Brooklyn, McNeese State and Arizona State, advancing and traveling to Harrisonburg, Virginia, to face James Madison where, after dropping the first game of the super regional, came back the next day to win two in thrilling fashion to advance to Oklahoma City.

The group got back to ASA Hall of Fame Stadium – OGE Energy Field thanks to a resurgence of its powerful offense and stingy pitching rotation, being held to single digits just once in the postseason, while holding teams to a run or less in five games of postseason play since the SEC tournament.

The offense was led by All-SEC Tournament Team selections Bianka Bell, who was also named First Team All-SEC, and Sandra Simmons, while the pitching circle was dominated by Second Team All-SEC and SEC All-Tournament selection Carley Hoover, Sydney Smith and Allie Walljasper. Bell, Hoover, Simmons and Walljasper, along with Sahvanna Jaquish, Kellsi Kloss and Bailey Landry were named to NFCA All-South Region Teams as well, giving LSU the most honorees of any school in the region.