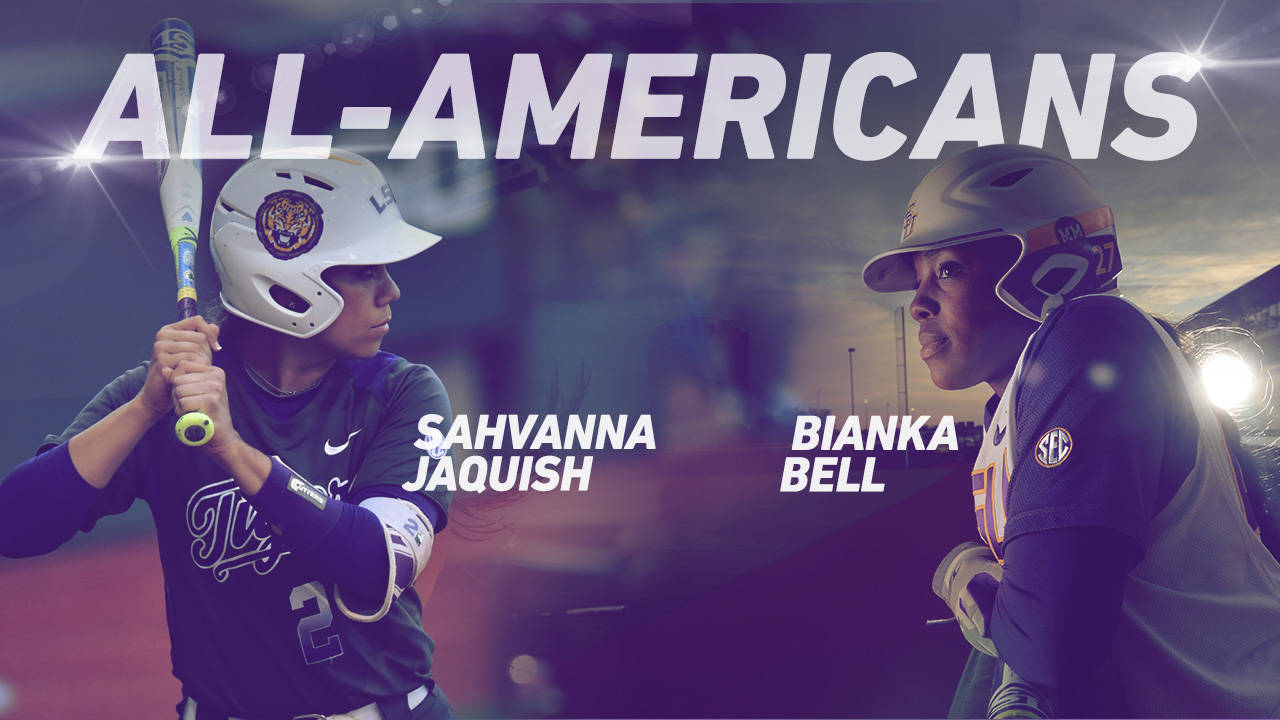 OKLAHOMA CITY, Okla. – On the eve of the 2016 Women’s College World Series, two members of the LSU softball team were bestowed with one of the top postseason honors in being named NFCA All-Americans as Bianka Bell and Sahvanna Jaquish were named to the NFCA All-America Third Team the organization announced today.

Bell was selected at third base, while Jaquish was picked as the designated player or utility/non-pitcher spot. Jaquish is now just the third player in LSU program history to be named an All-American three times in an LSU career, joining Leslie Klein and Britni Sneed, while Bell holds the distinction of being one of eight LSU players ever to be a two-time All-American.

“Bianka and Sahvanna have really led our team, and they’re a big reason why we’re still playing today,” head coach Beth Torina said. “In our eyes it’s considered a team award, and I know the players around them have continued to make them better. We’re honored to have them recognized.”

Bell will depart LSU as one of the most decorated LSU softball players in history, owning or sharing 14 different game, season and career marks at LSU, as this season the Tampa, Florida, native is leading the team with .386 overall batting average, producing 68 hits with 12 for doubles and 12 home runs. The two-time first team All-SEC selection will finish her Tiger career with batting average above .360, more than 270 hits and 230 RBIs, with a .670 slugging percentage and .480 on-base percentage.

“I wouldn’t be here without my teammates. They put us in a spot to shine this year and last year,” Bell said. “I wouldn’t be here if I didn’t have their support. And in that, if we don’t have a winning season, then winning these accolades doesn’t happen. It’s really awesome and why we emphasize the team mentality.”

The only other player on the team that can match Bell’s offensive production, doing so in three seasons, is Jaquish who leads LSU with 71 RBIs, the only player in LSU who can lay claim to having two seasons with 70-plus RBIs in a career. The Highland, California, native already owns the single-season record for RBIs in a year with 76 and 22 multi-RBI games, both from 2015, as she is five away from tying the total RBI mark, while just one multi-RBI game away from tying that record as well.

“I’m glad I don’t have to face Bianka Bell and I’m happy and honored that she’s on my team,” Jaquish said. “Being selected and on this team is an honor because they are the best-of-the-best. They have a lot to offer and just being here is a dream come true.”

LSU opens the 2016 Women’s College World Series Thursday night at 8:30 p.m. CT against the Michigan Wolverines at ASA Hall of Fame Stadium – OGE Energy Field in Oklahoma City. The game will be televised on ESPN2.