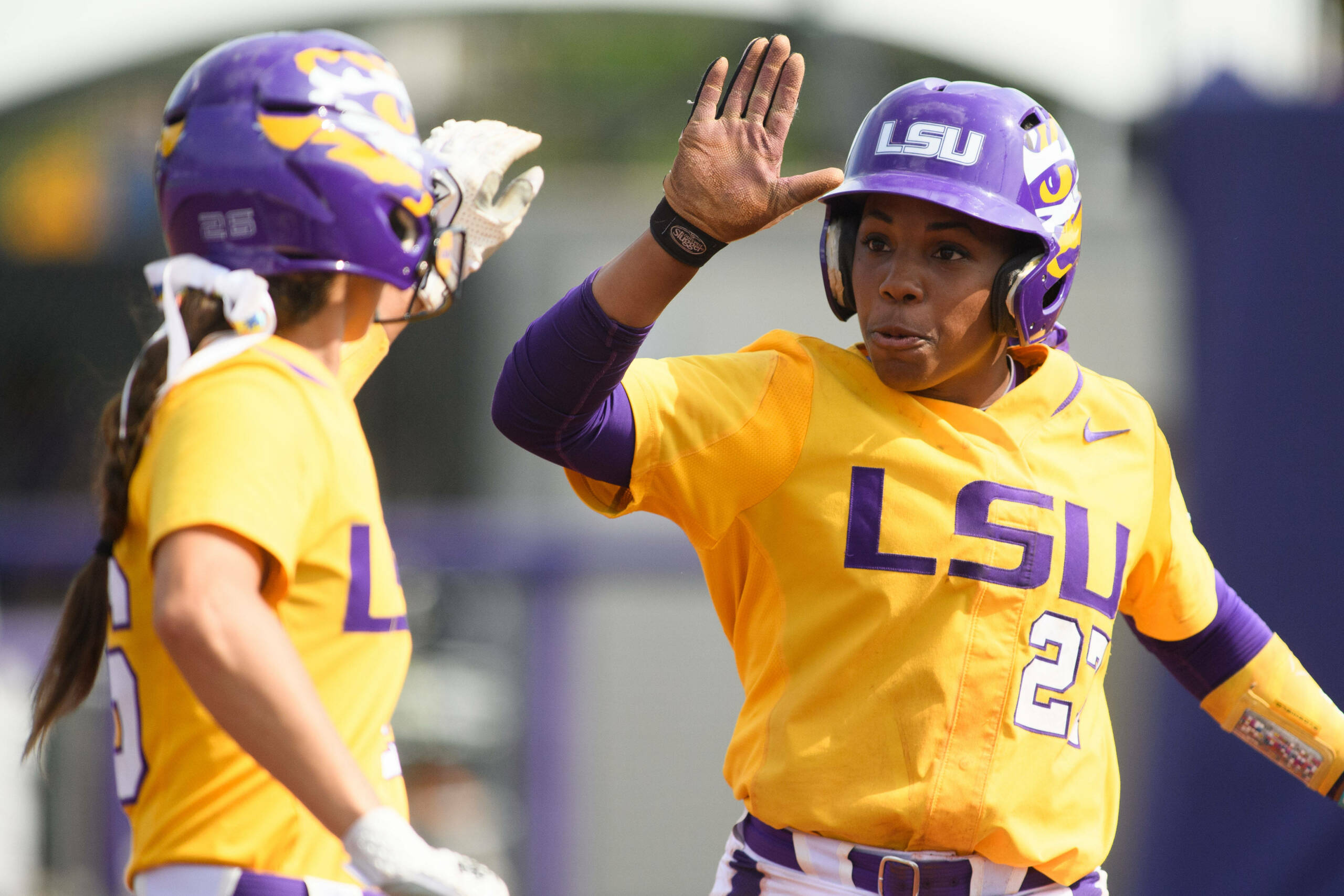 OKLAHOMA CITY, Okla. – The No. 10 LSU softball team begins its quest for a national championship on Thursday night, taking on the No. 2 Michigan Wolverines at 8:30 p.m. CT in the opener for both teams in the 2016 Women’s College World Series at ASA Hall of Fame Stadium – OGE Energy Field in Oklahoma City.

The contest will air on ESPN2 with Beth Mowins, Michelle Smith and Jessica Mendoza on the call from the booth, with sideline reporter Holly Rowe. The game will also be available through WatchESPN and the WatchESPN app.

Talk 107.3 FM in Baton Rouge will have all of the coverage of the team’s journey in the WCWS, with Patrick Wright calling all of the action from Oklahoma City. An audio stream can also be found online for Geaux Zone subscribers.

The Tigers, winners of the Baton Rouge Super Regional and the Harrisonburg Super Regional, come into the finals with a 50-16 overall record, finishing seventh overall in the Southeastern Conference with a 13-11 league mark. LSU is one of four SEC teams remaining, making up half of the championship field for the sport’s marquee event.

LSU has won 20 of its last 24 games heading into the WCWS, dropping just two games in the postseason and just one in the NCAA Tournament, winning two games last Saturday against James Madison to advance and make the program’s fifth trip to OKC and second-straight for the first time ever.

The Tigers are home in OKC! #LSU takes on #2 Michigan Thursday at 8:30 p.m. CT on ESPN2! #GeauxTigers #WCWShttps://t.co/In7gJTxRDm

Offensively, LSU is led by senior Bianka Bell who is hitting a team-leading .386 on the year with 68 hits, including 12 doubles and 12 home runs. The two-time First Team All-SEC selection is slugging .659 on the year, with a .551 on-base percentage and a record 55 walks received in 65 total games this season.

Fellow senior Sandra Simmons leads the team in total hits with 72, as the California product has produced career highs in hits, batting average (.375), runs scored (43), slugging (.557) and on-base percentage (.463), doubles (12), triples (4) and home runs (5). Simmons has played and started in 251 games for LSU in her four-year career, sporting a .983 fielding percentage.

Leading the team in RBIs and total bases is junior Sahvanna Jaquish, with 71 and 121, respectively. Jaquish has 21 multi-RBI games this season which is one away from tying the record for the most in a single-season, while being five RBIs away from tying her own school record of 76 from last season. She’s also roped 18 doubles and 12 home runs over the course of the year as well.

The pitching staff of the Tigers has ranked in the top 10 in ERA nationally for the entire season, sporting three pitchers with double-digit wins in the circle. LSU’s staff of Carley Hoover, Allie Walljasper, Sydney Smith and Baylee Corbello have combined for a 1.83 ERA over the course of the year, holding opponents to a .217 batting average.

Leading the way in many of the categories is Hoover, who is 20-8 on the season for LSU, as in 177.2 innings of work the sophomore and Second Team All-SEC pick has struck out 214 batters with 18 complete games, three solo and two combined shutouts and two saves. Opponents are hitting just .210 against Hoover when she is in the circle.

Posting 10 shutout innings to help propel LSU into the WCWS was fellow sophomore Walljasper, who improved her record to 11-5 in pitching the 22nd LSU postseason shutout by a pitcher in program history, while also netting a save right after to help clinch the super regional against JMU. She has a 1.74 ERA in the circle, issuing just 24 walks on the year.

Smith earned the start in the super regional finale and was dominant as she lowered her ERA on the season to 0.95 and improved to 13-3 on the season in earning the clincher. Smith leads the team with seven shutouts and has only issued 23 walks with 76 strikeouts in 95.1 innings of work.

Rounding out the quartet is Corbello, who is 6-0 on the year with a 2.26 ERA, holding a combined shutout with 34 strikeouts in 34 innings pitched.

LSU’s opening opponent in the Wolverines is 51-5 on the year, winners of the Ann Arbor Regional, Super Regional and the Big Ten regular season title. Michigan came back to beat fellow SEC-member Missouri in the second game of the super regional by overcoming a 4-1 deficit to advance to Oklahoma City.

The bottom half of the bracket is stacked with softball powers, as the winner of the game between LSU and Michigan will take on the winner of Oklahoma-Alabama, which precedes the tilt between the Tigers and Wolverines.

On the top half of the bracket, Georgia, who knocked out two-time defending national champion Florida in Gainesville, will take on Florida State to open the tournament Thursday. Following that, Auburn will take on UCLA in a battle of teams that also rallied from 1-0 deficits to advance to the WCWS against Arizona and Oregon, respectively.

The double-elimination format will whittle the eight-team field to just two, as the two remaining teams will advance to the best-of-three championship series that will take place next Monday-Wednesday.

“I think any team in the Women’s College World Series can win it,” Torina said. “Everyone is here for a reason. Everyone has got the ability to win it and if anyone plays their best game it’s anybody’s championship to win.”