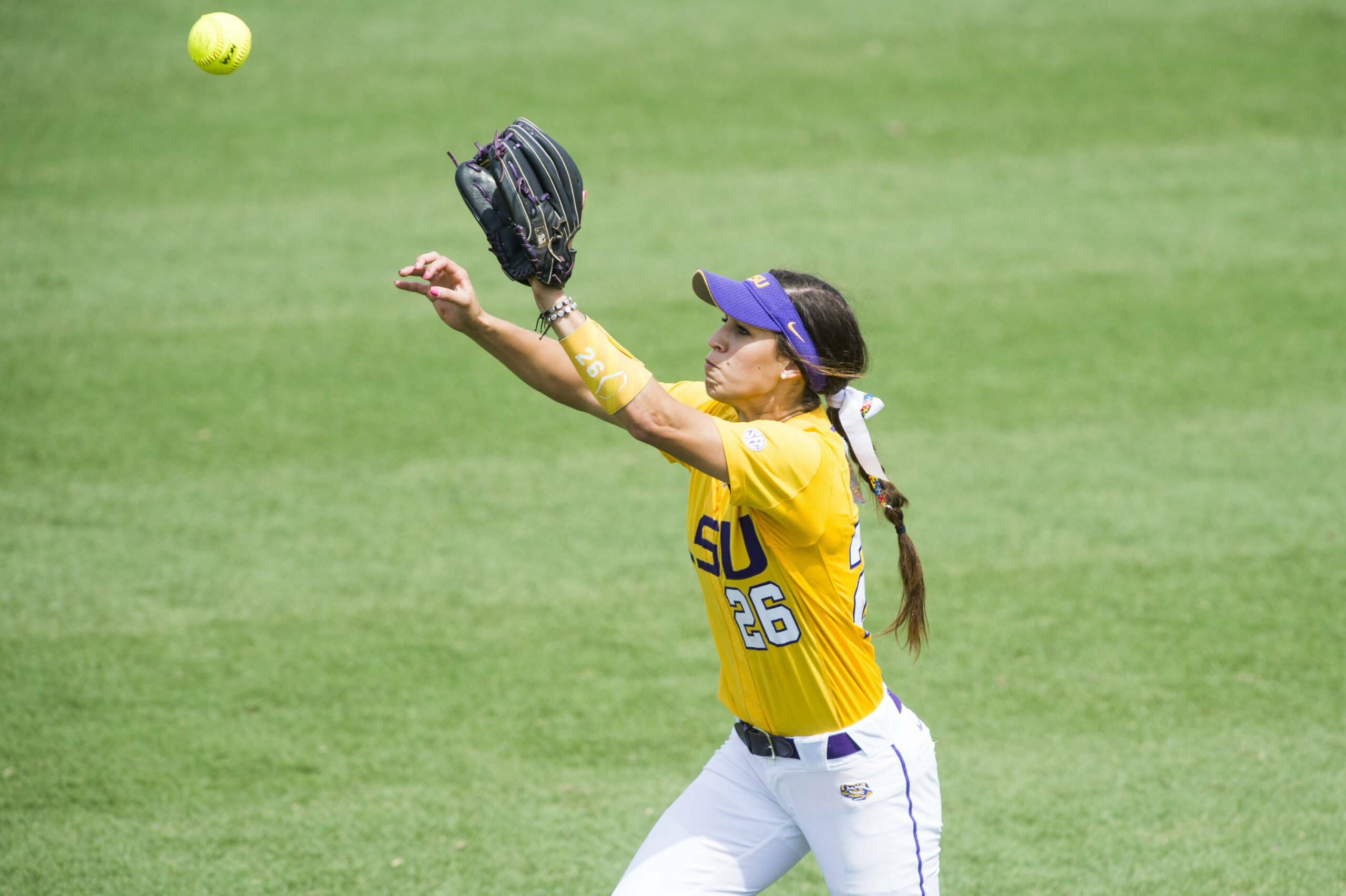 HARRISONBURG, Va. – The No. 10 LSU softball team will head into unchartered territory with a spot in in the 2016 Women’s College World Series on the line as the Tigers travel to Harrisonburg, Virginia, to take on the No. 8 and seventh-seeded James Madison Dukes in a three-game super regional at Veterans Memorial Park this Friday-Saturday, May 27-28.

The best-of-three series kicks off at 2 p.m. CT in Virginia, with game two of the super regional set for 11 a.m. CT Saturday, with the if-necessary third game taking place at 2 p.m. CT Saturday as well. ESPNU will have coverage of the first game, with the series shifting to ESPN on Saturday, with game three moving back to ESPNU with Jenn Hildreth and Carol Bruggeman on the call from JMU.

Talk 107.3 FM locally in Baton Rouge will have the radio coverage of the event with Patrick Wright, as fans will also be able to hear the stream of the super regional at LSUsports.net with a Geaux Zone subscription.

The first-ever meeting between LSU and James Madison on the softball field will be an all-out battle with the winner earning one of the eight coveted spots in ASA Hall of Fame Stadium-OGE Energy Field in Oklahoma City next week, as the Tigers are making their fifth appearance in a super regional, while James Madison is making its first.

“Every team that is still playing is a great team,” head coach Beth Torina said. “James Madison is a great opponent, they have two really good pitchers that will be something we’ll have to deal with and we know that they are going to play some really good games against us.”

It’s the second consecutive season that LSU has advanced to the winner-take-all second round of the NCAA tournament, with it just being the second time ever that the Tigers have made it there in back-to-back years with the first time being 2006 and 2007. In program history the Tigers are 5-5 all time at this stage of the tournament, winning the Baton Rouge Super Regional in a clean sweep over Arizona last year in two games.

LSU has advanced this far by virtue of its three-game sweep of the 2016 NCAA Baton Rouge Regional last weekend, earning wins over LIU Brooklyn, McNeese State and Arizona State at Tiger Park. The Tigers defeated the Blackbirds 10-2 in six innings Friday, Cowgirls 4-1 Saturday and the Sun Devils 2-0 to claim the regional. It was the second consecutive year it’s come down to LSU and ASU for the regional title, making it three-straight postseason wins over Arizona State.

The Tigers have won 18 of their last 20 games with a revival of the team’s dynamic offense and dominant pitching to open the year, as LSU averaged .378 at the plate over the course of the regional, outhitting all three opponents 31-14, while outscoring the group 16-3.

“I think we’re the team that nobody wants to get,” Torina said. “We have a lot of arms so other teams are preparing for a lot there, and we do some different things offensively as well. So as a team I think we’re a group that brings a lot to the table and will be a challenge.”

10 different LSU players earned hits on the weekend, with seven having multiple hits and driving in runs against the field. Of the 31 hits, eight were for extra bases in five doubles two triples and a home run, slugging .524 as a group, while drawing 17 walks, including tying a school record of eight alone against the Sun Devils, to aid in the group’s .485 on-base percentage.

Leading the charge with a .556 average was senior Sandra Simmons, who was one of four players named to the All-Baton Rouge Regional Team, as she had three doubles and a triple among her five hits, scoring four times with a 1.111 slugging percentage. Simmons is second on the team in average with a .378 mark, leading the team in hits overall with 70.

Bailey Landry led the regional in hits with six, with a triple, RBI, eight total bases and two runs scored to finish with a .500 average. She and Emily Griggs, who had three hits in one game, also finished with four hits with two runs scored.

The top RBI producer was junior Sahvanna Jaquish, who drove in five over the three games on the weekend, as two of her four hits were doubles, scoring twice with a spotless defensive fielding percentage as well. Jaquish has 70 RBIs on the season and is six away from tying her season record from last year, while over the weekend she became the second player to top 200 for her career.

LSU pitchers stifled the opposing sides to the tune of a 1.05 ERA, issuing three runs and five walks, while striking out 22 in 20 total innings of work. LIU, McNeese and ASU had a combined batting average of .200 on the weekend, having just three hits for extra bases.

Named the MVP of the regional was sophomore Carley Hoover, who improved to 20-7 on the season as she won two of the games and chipped in with a save to preserve the 21st shutout in LSU postseason history on Sunday. In 11.1 innings she struck out 13 and allowed just one run on eight hits during the regional, as she became the first LSU pitcher to win 20 games in a season since 2012.

Allie Walljasper pitched 5.1 innings of shutout ball in the finale on Sunday and improved to 10-5 on the season, giving LSU three pitchers on staff with 10 wins for the first time since 1997 and the second time ever. The sophomore also helped her cause at the plate, belting the team’s only home run of the weekend, her third for the season, on Friday and hit .286 altogether.

James Madison comes into the regional with a 49-9 overall record after sweeping through the NCAA Harrisonburg Regional, with wins over Princeton, North Carolina and Longwood. The Dukes are no stranger to SEC competition, as in the non-conference portion of the schedule they’ve taken down Tennessee and SEC champ Auburn, with their only loss coming against Alabama.

While hitting just .298 as a group, JMU is led by their pitching staff that has had one of the lowest ERA’s in the country all season and sports a 1.08 mark with two pitchers both under 1.00.