Getting To Know: John Parham 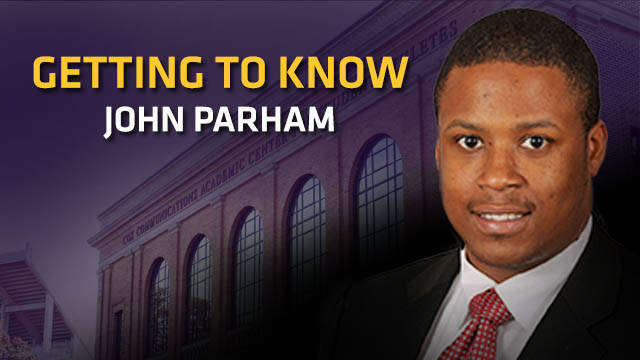 BATON ROUGE, La. – The Cox Communications Academic Center for Student-Athletes recently hired John Parham as an Academic Advisor within the department the center announced, joining the staff at LSU after a stint at Kentucky.

Parham, who holds a bachelor’s degree from the University of Louisville and master’s degree from Eastern Kentucky University, is a member of the National Association of Academic Advisors for Athletics and has held various roles within athletics throughout his career.

“I am excited to start a new challenge within the Cox Communications Academic Center for Student-Athletes here at LSU and look forward to working with the team to further develop their vision of being the premier provider of student-athlete support services,” Parham said. “I am fortunate to be joining such a respected team that prides itself on the total development of student-athletes.”

For more than three years Parham was a member of the University of Kentucky Center for Academic & Tutorial Services as an Academic Service Assistant, working primarily with the Wildcat football team.

Chief among his duties was developing and implementing study plans for more than 20 high-risk student-athletes, while coordinating daily tutorial services around student-athlete schedules. Parham monitored student-athlete’s eligibility and academic progress towards a degree, creating reports for coaches and administrators tracking class attendance and sessions with tutors.

Parham also assisted in creating individualized learning plans for student-athletes with diagnosed learning disabilities with learning specialists on staff at Kentucky, while also serving as a mentor to student-athletes and helping oversee use of the computer labs and quiet study areas.

“We’re excited for John to join our team at the Cox Communications Academic Center for Student-Athletes. With his background in academic advising and passion for working with students, John will be a valued member of our team and bring an enthusiasm that will hopefully translate to our student-athletes,” CCACSA Academic Affairs Associate Director Adriana Mason said.

After receiving his master’s degree at EKU, Parham served as an adjunct professor in the department’s exercise and sport science wing, developing lesson plans and all class activities, including midterms and the end-of-semester reports.

Before receiving his degree from Louisville, Parham began working with the Louisville Lightning indoor soccer team, performing all game day operations while working in the front office in assisting with the operations manual, coordinating team and player sponsorship contracts, season ticket sales and a marketing plan during their first season.