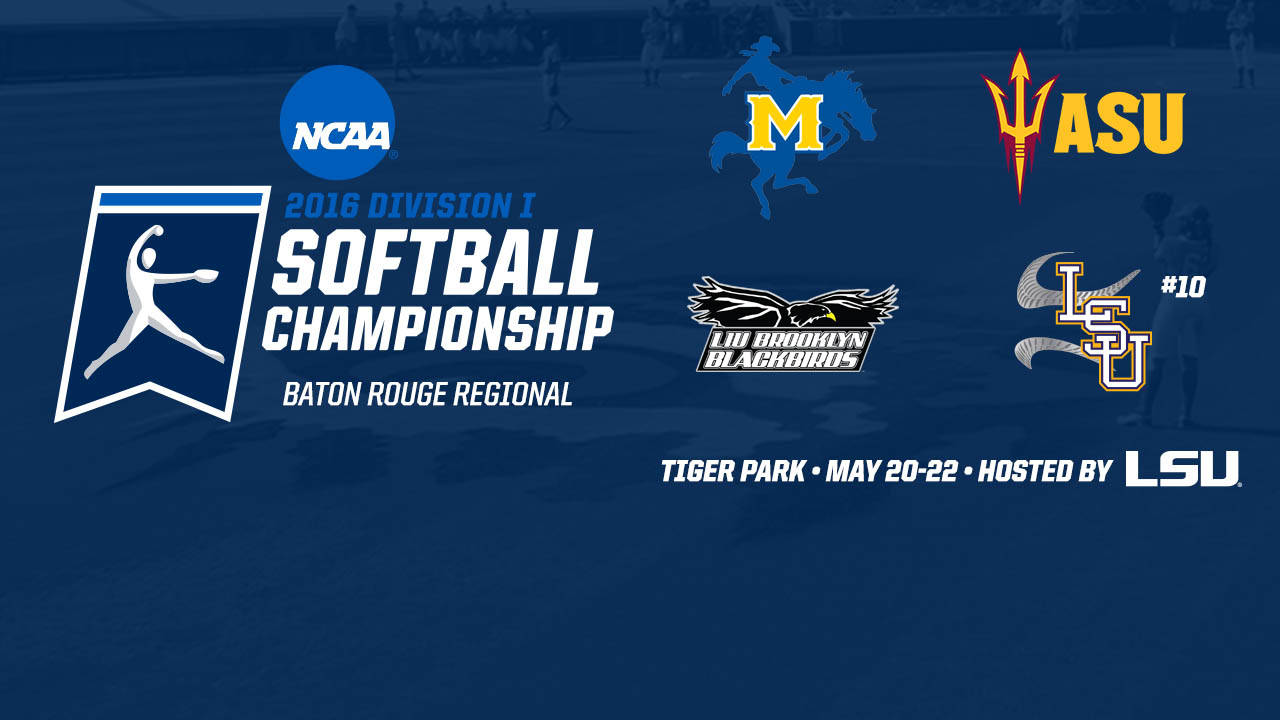 BATON ROUGE, La. – The No. 10 LSU softball team, the tenth overall national seed, will open the 2016 NCAA Division I Softball Championship on Friday evening at Tiger Park in Baton Rouge in the NCAA Baton Rouge Regional with a matchup against the LIU Brooklyn Blackbirds at 6 p.m.

LSU opens the national tournament in its own regional for the second consecutive year, hosting the Arizona State Sun Devils, LIU Brooklyn and McNeese State in the double-elimination tournament beginning Friday and ending on Sunday in Baton Rouge. The Sun Devils and the Cowgirls kick off the event Friday at 3 p.m., followed by LIU-LSU in the nightcap at 6 p.m.

Every game of the NCAA Baton Rouge Regional will be streamed online on SEC Network+, available through WatchESPN, with Lyn Rollins and Yvette Girouard on the call for the entire weekend. Every LSU game will also be aired on the radio home of LSU softball on Talk 107.3 FM in Baton Rouge and online at LSUsports.net in the Geaux Zone with Patrick Wright.

The Tigers are making their 18th appearance in the NCAA tournament, extending its record run in the postseason to 11 straight years. LSU is 57-36 all-time in the national tournament, holding a 44-24 record in the regional round of the event. It’s the 10th time that LSU has held a postseason event in Baton Rouge, following the heels of last season where LSU hosted both a regional and super regional for the first time in program history.

As has been their mantra all season, the team has seemed to save its best play for the end of the season when it counts most, winning 15 of their last 17 overall heading into tournament play. The Tigers extended that by going 3-1 in the SEC tournament last week in Starkville, falling only in the championship game.

“Hopefully we’ve played the whole season like we were playing in postseason tournament games, so I think we are well rehearsed for this moment,” head coach Beth Torina said. “The plan is to not make these games bigger than they are and to go out and compete the same way we’ve been all year long.”

LSU’s amazing run in the league’s annual tournament last year solidified the team’s standing as a host site for the first round, peeling off wins against Texas A&M, Kentucky and Tennessee over the course of three days, only falling to Auburn on the last day in the fourth-straight day of competition. The Tigers are one of 11 SEC teams in the postseason and one of eight national seeds from the conference.

The Tigers go into the tournament hitting .321 as a group with seven players averaging over .300 at the plate among the usual starting lineup. One key area the team hasn’t shied away from is free passes, drawing a program record 280 walks so far this season.

Leading the pack is senior Bianka Bell, who sports a .395 batting average with 12 doubles and 12 home runs, which ties the team lead. She’s driven in 58 runs this year and has scored 53 times this season, slugging .691 with a .552 on-base percentage.

Bell is followed by fellow senior Sandra Simmons, who along with Bell was named to the SEC All-Tournament team, as she is batting .369 with a team-high 65 hits, belting two of her four home runs in a strong performance in Starkville last weekend.

Junior Sahvanna Jaquish continues to be one of the top RBI producers in the nation coming into the tournament, leading the team with 65 and is just 11 off of her record pace of 76 from last season. The Highland, California, native leads the team in doubles with 16 and has 12 home runs as well, earning 60 total hits on the year.

Amber Serrett, Bailey Landry, Kellsi Kloss and Constance Quinn are the other .300 hitters, posing a formidable batting order for opposing teams to deal with.

In the circle, the Tigers boast one of the stingiest pitching staff’s in the country, led by All-SEC and SEC All-Tournament performer Carley Hoover, who has 18 wins on the season and 194 strikeouts in 159.2 innings of work. Hoover earned all three of LSU’s wins in the circle last week to tie her wins total from her freshman campaign, appearing in 33 games with 21 starts.

Hoover is backed by freshman Sydney Smith who has a 0.80 ERA, which is currently fourth in the nation coming into the weekend. She has a 12-3 record with a team-high seven shutouts and 70 strikeouts in 88 total innings.

Allie Walljasper is 9-5 on the season and has issued just 19 walks in 113.1 inning of work, while Baylee Corbello has a 6-0 record on the season.

LIU Brooklyn won its 14th Northeast Conference title last weekend, defeating Robert Morris in a winner-take-all contest. The Blackbirds are 30-25 on the season, finishing with a 14-2 record in the NEC.

The Cowgirls will be a very familiar face for the Tiger Park faithful, as McNeese and LSU tangled during the regular season with the Tigers winning 5-2 in Baton Rouge. McNeese is in a Baton Rouge Regional for the first time since 2010, as the Southland Conference regular season and tournament champions are 42-12 on the year.

Arizona State is 30-24 on the year and makes its return trip to Baton Rouge after participating in last year’s regional. The Sun Devils pushed LSU to the brink, forcing the Tigers to go through the loser’s bracket to advance to the super regional round with two wins on championship Sunday.

“It’s always challenging to prepare for so many teams, it’s not something we do a lot this last half of the season, but we do it a lot early so we’re prepared,” Torina said. “It makes a little more work for the coaches, but it’s not something that we aren’t used to.”