Golf Grad Bradley to Tee Off at NCAA's on Friday 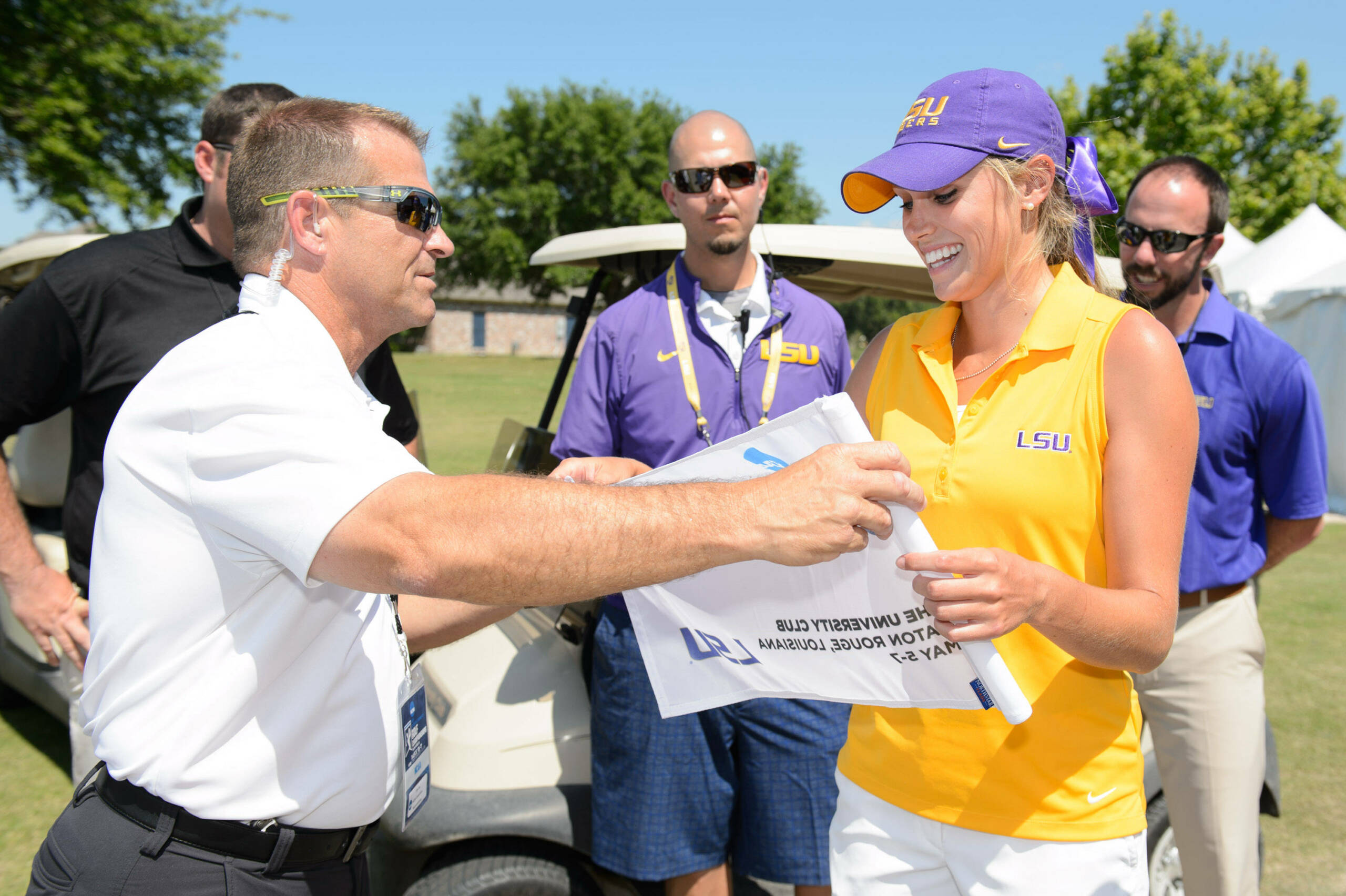 EUGENE, Ore. – LSU senior golfer Elise Bradley will conclude her college career in the most important college event there is, the NCAA Championships which begin on Friday at the Eugene Country Club.

The event has taken on even more importance with the addition of national television coverage and a match play format to determine the team championship, but the focus of Bradley, who hails from Mandeville, will be the individual competition after she qualified with a T4 finish of 3-under for 54 holes in the NCAA Regional event earlier in the month at the University Club in Baton Rouge.

Bradley is one of 12 individuals who qualified for the event outside of the qualifying teams based on their performance at each of the four regionals, but they have a chance for their own place in this event. All the competitors play 54 holes Friday through Sunday with the field cut to 15 teams and the top nine individuals not on those teams. That group will come back on Monday to not only determine the eight teams for match play but also determine the individual champion and that action will be televised in prime time on Golf Channel.

The senior, who was an honorable mention All-America as a junior, was at her best at the U-Club after opening with two even par 72s, the latter a scrambling round that saw her get back to even with a birdie on the last hole.

“Going into the tournament, I felt very confident having played the (University Club in Baton Rouge) for four years,” Bradley said. “During the summer and spring, when the course is hard, fast and it is windy, it plays about as hard as it can get. The course was in outstanding condition, especially the greens. The first two days I struck the ball better than I scored and gave away a few strokes here and there.”

After two rounds of the regional, it appeared that the Lady Tigers on this attempt, would not be able to go back to the championships as a team for the second straight year. But Bradley was certainly in the mix for one of the three individual spots and she had promised she was going to be aggressive and not leave anything on the table.

But knowing where you stand when those advancing standings are not readily apparent can make for an interesting day.

“I really had no idea where I stood compared to the other individuals,” said Bradley, “which made it a little nerve-wracking. After our first nine holes I was 3-under. Going into the last nine (the front nine on the course), the wind picked up a little and on some of those holes, par is a good score. I really tried not to force anything and play smart.”

Bradley bogeyed two holes to fall back to -1, and on the qualifying bubble, but two late birdies brought her home at 3-under 213 with a final round of 69.

“Playing in Florida last year gave me a good idea of what to expect going into this year,” Bradley said. “Last year was a bit of a shock because, it is a completely different atmosphere.”

Weather delays made the three rounds start and stop affairs and that could happen again with rain Thursday and rain percentages increasing from 20 percent on Friday to 80 percent on Sunday and Monday with temperatures in the low 60s.

Bradley was one of the most improved golfers in college golf in her junior season, averaging 73.70 for 33 rounds after averaging 79.76 for 17 rounds as a sophomore. Included in that junior breakout season was a win in the 2015 LSU Tiger Golf Classic in sudden death at the U-Club. Bradley participated in all 30 rounds this year and averaged 74.87.

“I don’t think I could have asked for a better experience from the one LSU has given me,” Bradley said. “These four years have forced me to mature and prepare for life as an adult. I have made lifelong friends and learned valuable lessons. It is a bitter-sweet feeling. As I will miss this time in my life incredibly, it is time to move on and experience new things.”

But before that, comes her Friday tee time at 10:25 a.m. CT (8:25 a.m. PT in Eugene) after the first wave and on Saturday her second round will commence at 2:55 p.m. CT. Her third round tee time will depend on her positioning in the standings.

The Eugene Country Club will play to approximately 6,350 yards and a par 72 but a 37-35 layout with only one par 3 on the first nine holes and three par threes coming home.

Live scoring for the event can be found through LSUsports.net through Golfstatresults.com. Updates will be available on Twitter during the round as available @LSUwomensgolf and the hashtag #NCAAGolf.