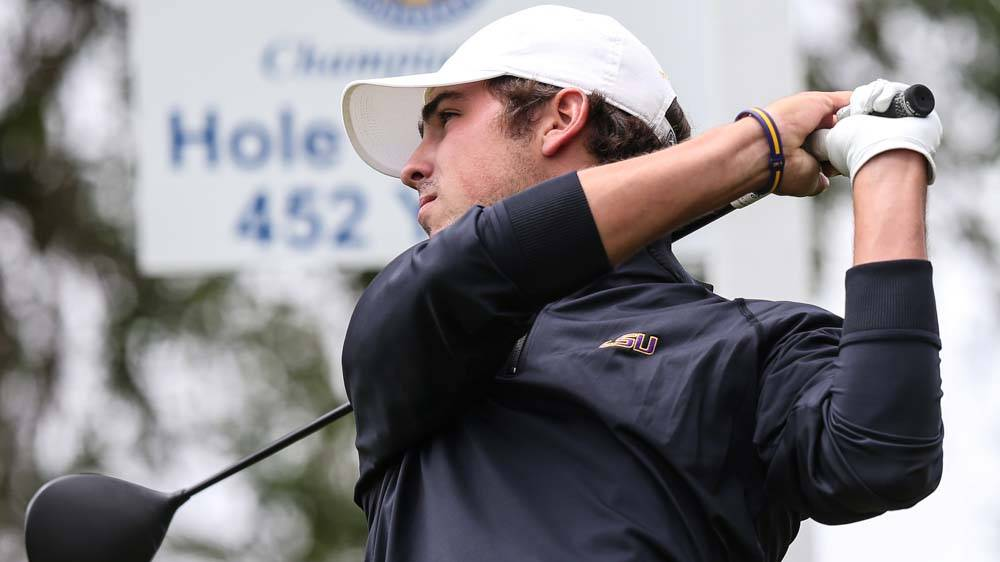 FRANKLIN, Tenn. – Junior All-American Eric Ricard fired a 7-under par 65 and freshman Sam Burns added a bogey-free 5-under par 67 to lead a quartet of Tigers under par in Tuesday’s second round as No. 3 seed LSU climbed four spots and finished the day in third place overall at the NCAA Franklin Regional held at the Vanderbilt Legends Club.

The defending national champions took advantage of a favorable day for scoring as they carded 25 birdies in 90 holes played in the second round to post the third-lowest team score in the field at 16-under 272.

Ricard was masterful as he wrote eight birdies and just one bogey on his scorecard to match the lowest round of his collegiate career with a 7-under 65, while Burns nearly matched his teammate with a 5-under 65 that was without blemish. Senior Zach Wright and junior Brandon Pierce matched one another shot-for-shot on the day as the two All-Americans added counting scores of 2-under 70 in the second round.

Pierce was the first Tiger in the clubhouse in Tuesday’s second round as he finished at 3-under par on the inward nine after making the turn at 1-over par on the day. Despite falling to 2-over par through 11 holes, a run of four birdies over his final seven holes at the par-three third, par-three fifth, par-five seventh and par-four ninth holes was good for a 2-under 70 on the day.

Pierce bounced back from his 4-over 76 in Monday’s opener to move into a tie for 46th place on the overall leaderboard with a 36-hole score of 2-over par 146 with just one round to play on Wednesday.

Wright matched Pierce with a 70 of his own thanks to another strong finish as he also birdied No. 7 and No. 9 to get to 2-under par after playing even-par with two birdies and two bogeys on his card through 15 holes. It was also an impressive turnaround from the first round when Wright posted a 3-over 75 as he finished Tuesday’s action in a tie for 39th place at 1-over 145 for the championship.

Rounding out the lineup in the second round was freshman Luis Gagne, who followed his 3-under 69 on Monday with a 2-over 74 on Tuesday to finish the day in a tie for 29th place with a 1-under 143 for 36 holes.

The No. 2-ranked and No. 1-seeded Texas Longhorns extended their regional lead with another outstanding day of play as they finished at 37-under par after 36 holes with a two-day total of 539. They followed a team score of 20-under par 268 on Monday with a 17-under 271 to sit comfortably ahead of No. 5 seed Virginia in second place at 20-under 556. Also joining the Tigers in the Top 5 of the team standings are No. 2-seeded and No. 9-ranked Vanderbilt and No. 8-seeded Kennesaw State in a tie for fourth place at 14-under 562.

No. 4 seed Washington finds itself just one shot outside of the Top 5 qualifying places for the NCAA Championships in sixth place at 13-under par, while No. 6 seed Houston follows in seventh at 9-under par.

First-round leader Doug Ghim of Texas ended the second round in a tie for first place with James Madison’s individual Ryan Cole with matching scores of 11-under par 133 in 36 holes. Following one shot back in a three-way tie for third place with two-round scores of 10-under par 134 were Texas’ Taylor Funk, Houston’s Michael Perras and Washington’s Carl Yuan.

The Tigers are paired with first-place Texas and second-place Virginia in Tuesday’s final round at the NCAA Franklin Regional as they will tee off from the front nine beginning at 8:45 p.m. CT. As with the first two rounds of play, Golfstat will provide live scoring of the final round as fans can follow the Tigers online at http://www.golfstat.com.