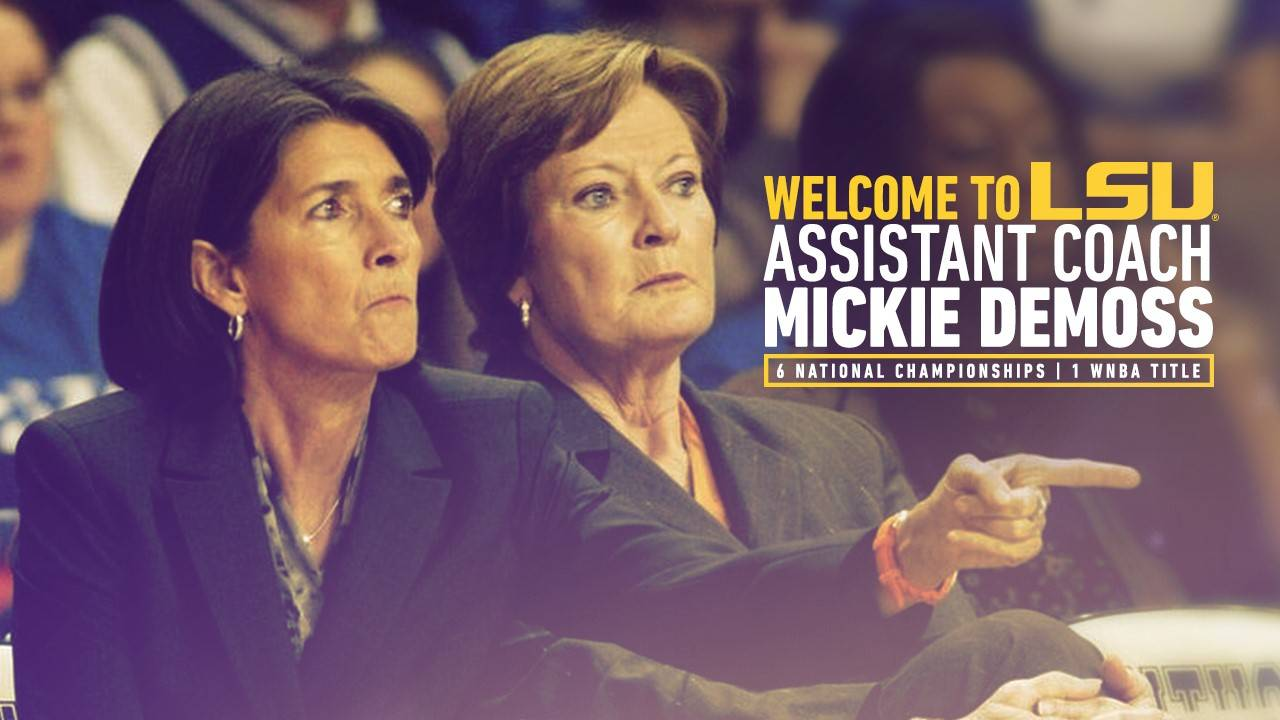 BATON ROUGE, La. — LSU women’s basketball coach Nikki Fargas may have landed one of her most heralded recruits yet.

A 39-year veteran of the women’s basketball coaching ranks with six NCAA championships and one WNBA title, Mickie DeMoss has joined the Lady Tigers as an assistant coach. The hiring is subject to approval by the LSU Board of Supervisors.

“Mickie DeMoss will be a great addition to our basketball staff,” said Fargas. “Not only does she have an impressive resume where she has won at every level she has been at both collegiately and professionally as well as an unbelievable knowledge of the game, but she also has a personality that allows her to connect so well with her players. Her ability to teach is going to be instrumental as we move forward.”

“She is so respected in the women’s game that many coaches around the country have tagged her as the ‘godmother of assistant coaches,’” added Fargas. “Mickie has written the book on what it takes to be the best assistant coach in women’s college basketball.”

“Mickie’s love for the state of Louisiana makes her the perfect fit for our staff,” said Fargas. “She is not only a native, but she has coached here in the state. We are also excited because she has always been known as one of the top recruiters in the country and she has the ability to train student-athletes for that next level of professional basketball.”

Fargas and DeMoss have extensive history from their days in Knoxville, Tenn., as DeMoss was an assistant coach when Fargas played for the Lady Vols (1990-94) and the pair were on Summitt’s staff together from 2002-03. DeMoss also coached current LSU assistants Tasha Butts and Charlene Thomas-Swinson. She was an assistant at Auburn when Thomas-Swinson lettered for the Tigers and was associate head coach at UT during Butts’ career.

Immediately prior to returning to the collegiate coaching ranks at Louisiana Tech, DeMoss was an assistant coach for the Indiana Fever in 2012 and 2013 and helped guide the franchise to the 2012 WNBA championship.

A long-time coach with the Lady Vols, DeMoss had two successful stints in Knoxville separated by four years as a head coach at Kentucky and three seasons as an assistant at the University of Texas. In her first 18 years with the Lady Vols (1985-03), DeMoss helped lead UT to six national titles, 12 trips to the Final Four and a stellar 554-77 overall record.

DeMoss was promoted to associate head coach at UT in 2000 and remained in that role for three seasons before she was named head coach at Kentucky in March 2003. In four years with the Wildcats, she guided UK to a 71-56 record including consecutive 20-win seasons and three postseason appearances (one NCAA and two WNIT). She was named 2006 SEC Coach of the Year, a first for a UK coach, after guiding the 22-9 Wildcats to the NCAA Tournament for the first time in seven seasons and punctuated the trip with an NCAA win.

DeMoss elected to step aside as head coach at Kentucky in April 2007, but her coaching hiatus was short-lived as she accepted a position at Texas in the summer of 2007. She was the Longhorns’ top recruiter while also coaching the post game for three seasons under Gail Goestenkors.

At the request of her long-time mentor, DeMoss returned to Knoxville in the spring of 2010 to serve on Summitt’s staff for the final two seasons of the legendary coach’s career with the Lady Vols. She helped lead the 2010-11 squad to a 34-3 record, including an undefeated 16-0 showing in the SEC.

DeMoss was a player on the inaugural Lady Techster team in 1974 and lettered for the first three years of the program’s existence. She was the very first point guard in the history of the program.

A native of Tallulah, La., DeMoss received her undergraduate degree in physical education from Louisiana Tech in 1977. She later received her master’s degree in education at Memphis State in 1979.