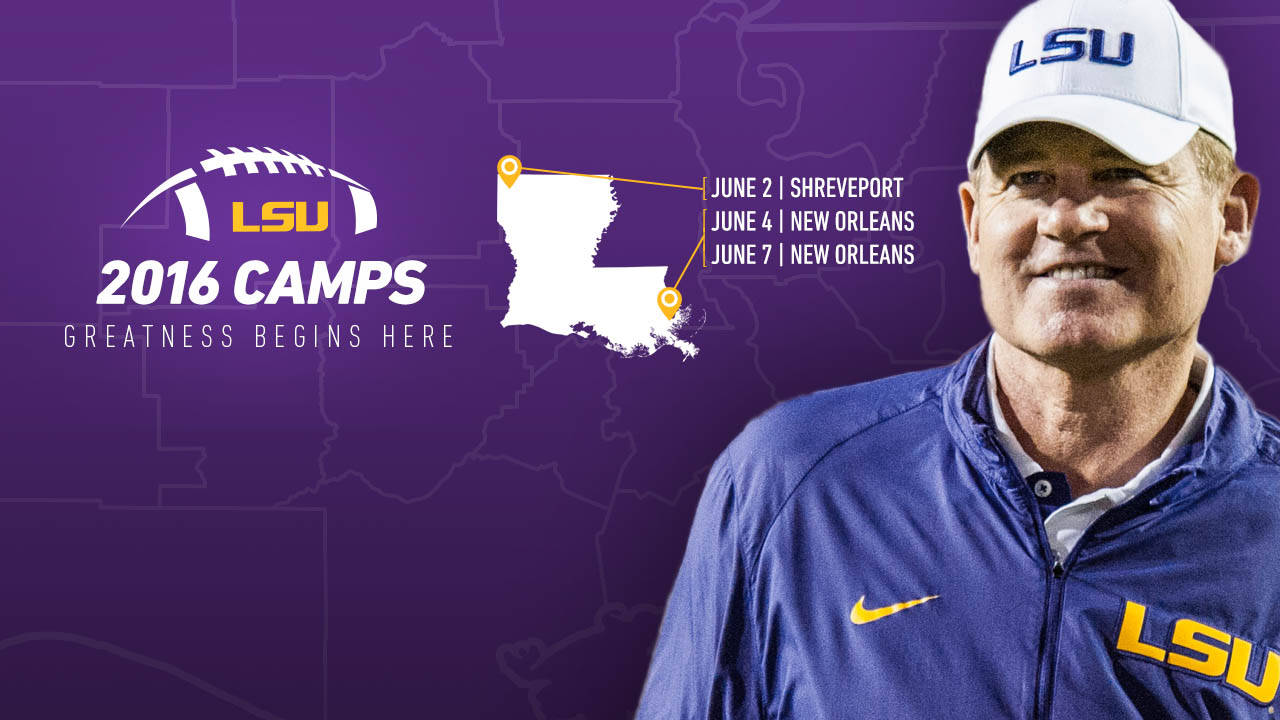 BATON ROUGE — Les Miles and his coaching staff will be bringing LSU football to north and south Louisiana as the Tigers will hold “Satellite Camps” in Shreveport/Bossier City and New Orleans during the first week of June, Miles announced on Tuesday.

The first camp, which will be held on Thursday, June 2, will take place at Freedom Field in Bossier City and will cost only $20 to attend. After hosting a kicking and specialist camp on the LSU campus on Friday, June 3, Miles and his staff will conduct a camp at the New Orleans Saints Practice Facility in Metairie on Saturday, June 4. The price of the camp at the Saints Facility is $20.

“First of all, philosophically, we want to be in Louisiana first,” Miles said. “We want to make sure that the places that we turn to are people that play on our teams first. We will end and start our camps in Shreveport, New Orleans and certainly Baton Rouge. We are also going to partner with in-state colleges who are willing to participate, including Louisiana-Lafayette, Louisiana-Monroe, Louisiana Tech, McNeese State, Southeastern, Southern, Grambling, Nicholls State, Northwestern State and Louisiana College.

“Our first nine days (of the allotted 15) will be in the state of Louisiana. We won’t leave the state until we have delivered a camp to the north, south and certainly on our campus.”

In addition to the three camps outside of Baton Rouge, Miles will host five camps on campus at the Charles McClendon Practice Facility in June and July. After the kicking camp on June 3, Miles and his staff will host a youth camp on June 5-6, high school camps on June 9-11 and July 21-23 as well as a 7-on-7 team camp and a lineman camp on July 16.

Information on LSU’s Satellite Camps as well as the camps taking place on the LSU campus can be found at www.LSUcamp.com.

Miles said he’s excited to partner with 10 other state universities at the Satellite Camps as well as the camps being conducted on the LSU campus.

“The schools that are partnering with us have a vested interest in the state of Louisiana,” Miles said. “Louisiana is where they get their players from. They (other coaching staffs) want to be at a place where there is going to be as many as 400-plus prospects and have the ability to watch and see them perform, instruct them and see how they learn. Being around and representing another college certainly is positive.”

Miles said that one big goal of the three camps located off of the LSU campus is developing relationships, while also introducing young football players to a certain level of football.

“What we intend to do with that commitment is we want to start and segment the pieces in youth football, but we really want to get around and raise the understanding of technique in football in the state,” Miles said. “We want to create relationships in New Orleans and in Northern Louisiana certainly as we serve them. You instruct, teach and raise the level of play. It’s a very positive thing for everyone involved.”