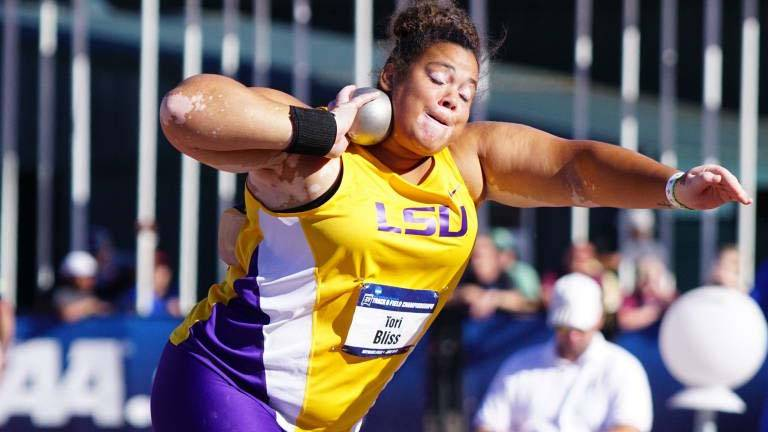 Bliss and Ernest both received their degrees in sport administration while taking part in the graduation ceremony for the College of Human Sciences & Education at the Pete Maravich Assembly Center.

Multi-event athlete Therese Jernbeck and former distance runner Bryan Mutell both graduated from the E.J. Ourso College of Business as Jernbeck earned her undergraduate degree in international trade and finance and Mutell received his Master of Science in analytics. Also graduating Friday was sprinter Jalea Jackson  with her degree in theatre with a concentration in film and television from the College of Music & Dramatic Arts.

Bliss ended her collegiate career with the Lady Tigers following the 2015 season as one of the most decorated throwers in the program’s history. A three-time All-American in the shot put, Bliss went out as the school’s indoor record holder with a throw of 60 feet, 7 ¼ inches set in a runner-up finish at the 2015 NCAA Indoor Championships and outdoor record holder with a lifetime best of 60-8 set last spring. She was also crowned the 2015 SEC Indoor Champion while throwing a meet record 60-1 a season ago.

Ernest is one of the most decorated sprinters in the history of the Tiger program as his 11 career All-America honors currently ranks No. 4 on the school’s all-time list of honors. The 2012 NCAA Outdoor Champion in the 4×100-meter relay also achieved All-America status in the 100-meter dash and the 200-meter dash during both the indoor and outdoor seasons in his time with the Tigers.