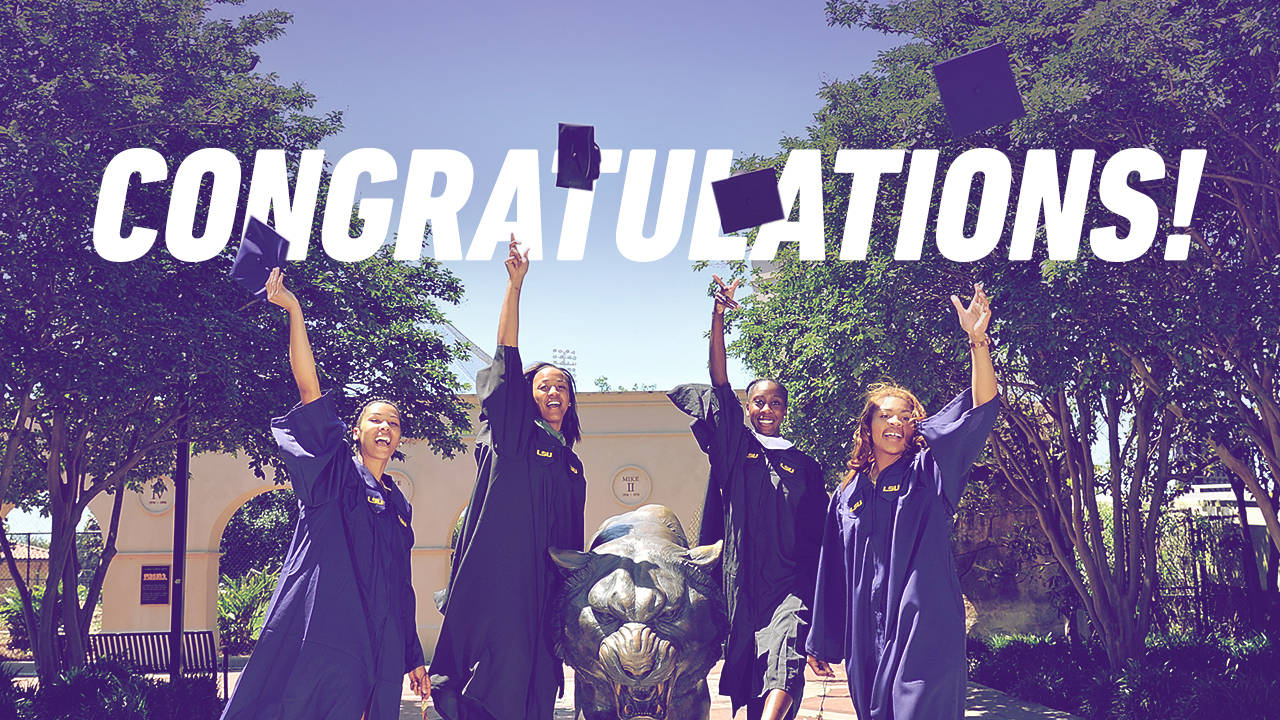 BATON ROUGE, La. – LSU women’s basketball head coach Nikki Fargas has much to be proud of as three players and two graduate assistants will participate in graduation ceremonies this week on the LSU campus.

Jones earned her bachelor’s degree in interdisciplinary studies in December 2015 but was unable to participate in Commencement on campus because the Lady Tigers were on the road at Rutgers. Jones, who played two seasons for the Lady Tigers as a transfer from the University of Memphis, finished her career at LSU with 196 points and 169 rebounds. She was named to the 2015 SEC Community Service Team and was selected in February 2016 as the Cox Communications Academic Center for Student-Athletes (CCACSA) Student-Athlete of the Month. Jones also earned recognition on the Athletic Director’s Honor Roll. A native of Jackson, Tenn., Jones prepped at Liberty Magnet School.

Bethel will receive her bachelor’s degree in sports administration leadership at Friday’s ceremony. Named to the 2016 SEC Community Service Team, Bethel played two seasons for the Lady Tigers after transferring from West Virginia. She completed her career with 404 points, 325 rebounds and 100 steals. She led LSU in steals in 2015-16 with 55 and earned Louisiana Sports Writers Association (LSWA) Player of the Week honors on Dec. 14 following a standout game against UC Santa Barbara. Bethel is a native of Baltimore, Md., who prepped at Academy of Holy Cross.

A junior transfer from North Texas, Hyder will receive her bachelor’s degree in sports administration commerce. Hyder, who led LSU in scoring and rebounding this season, was an honorable mention All-SEC honoree by the Associated Press. She was named the LSWA Newcomer of the Year and second-team All-Louisiana after averaging 12.2 points and 7.9 rebounds a game. A native of Austin, Texas, Hyder prepped at Lyndon B. Johnson Early College High.

“As the athletic academic advisor for women’s basketball and having the support of Coach Fargas and her staff has been a great experience because they have always stressed the importance of their players being competitive on the court and in the classroom,” said CCACSA Senior Associate Director Carole Walker. “It makes my job a lot easier because everyone is on the same page in regards to student-athletes making good grades and graduating from LSU.”

Former Lady Tiger standouts Destini Hughes and LaSondra “Boogie” Barrett returned to Baton Rouge to attend graduate school and have served as graduate assistants for Fargas the last two seasons. Both completed their playing careers in 2011-12 and were part of three NCAA Tournament teams while at LSU.

“It’s always a great testament to your institution and your program when you have players return for the purpose of earning advance degrees,” said Fargas. “We are so proud of what Destini and Boogie have accomplished in returning to LSU and serving as graduate assistants. They have very bright futures ahead of them and they are shining examples of the emphasis we place on academics.”

Under Fargas, 16 Lady Tigers have earned their degrees and the program has received 18 academic accolades from the SEC. In fact, Fargas boasts a 100-percent graduation rate for players who have exhausted their eligibility at LSU.

Barrett will receive her master’s degree in kinesiology with a specialization in sport management, and has maintained a 3.481 grade point average in graduate school. While a player from 2008-12, Barrett was named to the Athletic Director’s Honor Roll all four years, and was a 2012 SEC Community Service Team honoree. She is one of only two players in school history to tally over 1,500 points, 200 assists, 800 rebounds and 100 steals in a career for the Lady Tigers and was selected as LSU’s 2016 SEC Womens Legend. A native of Jackson, Miss., Barrett previously earned her bachelor’s degree in sports administration in December 2011.

Hughes will receive her master’s degree in communication studies and has maintained a 3.736 GPA in graduate school. She also played for the Lady Tigers from 2008-12 and was named to the 2009 SEC First Year Honor Roll. During her career, she tallied 370 points, 207 assists and 110 steals as a point guard. A native of Fort Worth, Texas, Hughes received her bachelor’s degree in animal, dairy and poultry sciences in December 2011.

In addition to the five who are participating in Friday’s Commencement festivities, the Lady Tigers had another graduate on the roster this season as Anne Pedersen opted to return for her senior season in 2015-16 even though she had already graduated from LSU in May 2015 with a bachelor’s degree in sports administration. Pedersen has balanced graduate school with her duties on the court this year and is on target to earn her master’s degree in just over two semesters. She expects to complete her requirements for a master’s in kinesiology with a specialization in pedagogy and psychological sciences in August 2016.

“I could not be more proud of what we are accomplishing here at LSU,” said Fargas. “From our student-athletes, who are committed to maintaining excellence in the classroom, to our dedicated staff, who provide all the guidance and resources to ensure academic achievement, we have continued to show that academic success is equally important as athletic success to our program.”