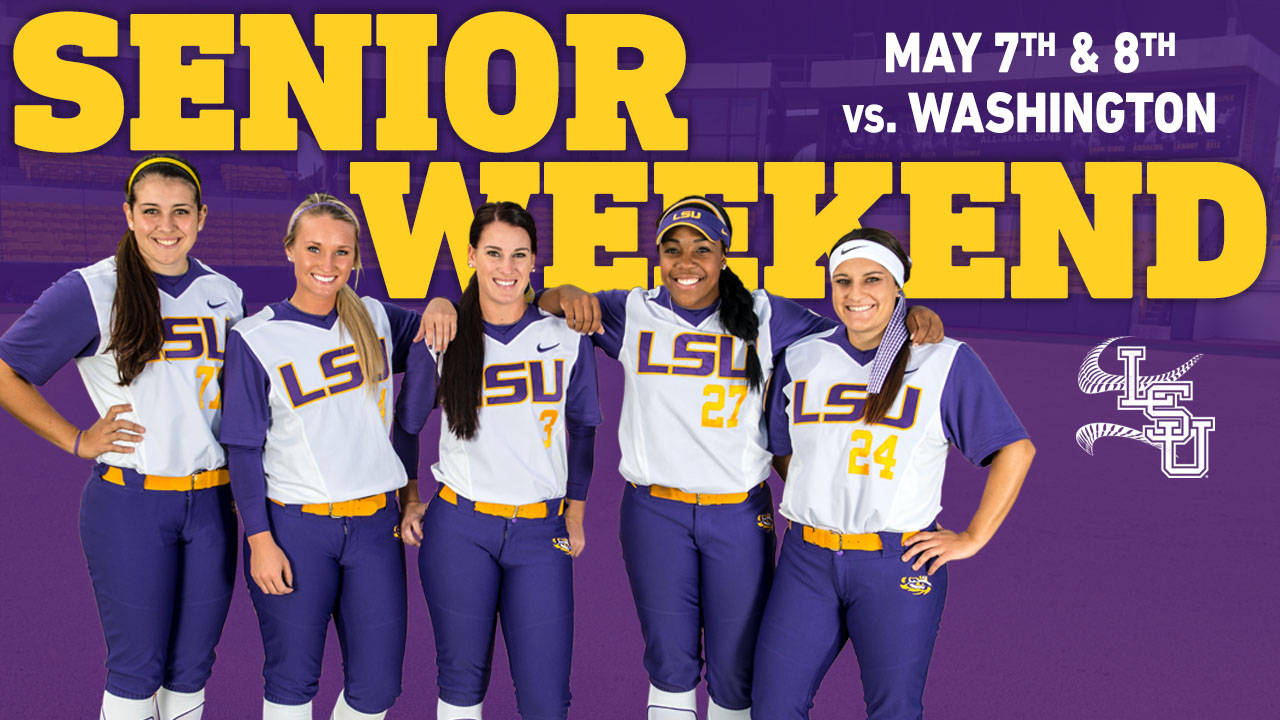 BATON ROUGE, La. – The No. 13 LSU softball team closes the regular season at home this weekend in Tiger Park, hosting the Pac-12’s No. 11 Washington Huskies for a three-game series on Saturday and Sunday in Baton Rouge.

It’s a big weekend for the Tigers as the program will honor the five-member senior class of Bianka Bell, Alayna Falcon, Kellsi Kloss, Jenna Kreamer and Sandra Simmons prior to the start of play each day on Saturday and Sunday. After the game on Sunday, fans are encouraged to stick around for a postgame ceremony honoring the group in the final regular season home tilt for the squad.

All three games of the series will be covered, with SEC Network+ streaming the doubleheader on Saturday which begins at 4 p.m. CT at Tiger Park, with game two will taking place at least 30 minutes after the first game has ended. The finale against the Huskies will be televised live on ESPN2 with Tiffany Greene and Danielle Lawrie, with the stream of the game available online through WatchESPN.

Talk 107.3 FM locally in Baton Rouge will have radio coverage both days beginning 15 minutes prior to first pitch. Patrick Wright is in his 20th season calling LSU softball, as fans can also tune in online through the Geaux Zone with a subscription.

LSU enters the final weekend of the regular season on a bit of a hot streak, as the squad closed SEC play last weekend on the road at Arkansas. The Tigers earned their second consecutive sweep, taking all three games in Fayetteville to improve to 40-13 on the season and with a 13-11 conference mark.

Currently, LSU is on a 10-game winning streak heading into the top 15 showdown with the Huskies this weekend as winners of 11 of the last 12 overall stretching back into late April. With 17 games against teams in the top 25 of the RPI already, LSU will get three more opportunities this weekend to shore up its NCAA tournament credentials against a Washington team that is eighth in the latest release on Monday.

“I feel really good about the spot we’re in, and we’re playing really good softball,” head coach Beth Torina said. “I think we’ve presented a really good case for ourselves with the committee that’s going to be making the decisions here at the end of the year. This is a spot we were hoping to get to, and we’re really feeling good about it.”

The three games at Arkansas were the last for LSU until this weekend, but the Tigers made use of the series by outscoring the Razorbacks 24-11 and producing 31 total hits over the course of that weekend, finishing with a .352 batting average as a group. Producing double-digit hits all weekend, the Tigers have earned double figure base knocks in each of the last four games which is the longest stretch for the team this season.

Finishing with 10 RBIs in all four of LSU’s wins last week was junior Sahvanna Jaquish, as on Monday she was named the SEC’s Player of the Week for the second time this season. She had eight hits, with five for extra bases including four doubles and a home run. She leads the team with 17 multi-hit games and 19 multi-RBI games, three away from the record she set last season with 22.

Leading the team in average is Bell with a .383 mark, as she was also one of the three players with eight hits last weekend along with Jaquish and Simmons. Bell was walked four times on the weekend and has 42 on the year, five shy of tying A.J. Andrews’ 2015 single-season record of 47. Simmons was walked three times which was tied for the second most among Tigers last weekend, as she finished conference play leading the team in overall average at .384 and hits with 28.

Lowering her ERA to a staggering 0.60, LSU freshman Sydney Smith in her win to clinch the sweep last Sunday is now the nation’s leader in the category as she improved her record to 10-2 on the season in the process. Carley Hoover earned her 15th victory in LSU’s comeback win on Saturday, while Allie Walljasper is a win away from giving LSU three pitchers with 10 wins for just the second time in program history with a 9-5 record.

Washington comes into the weekend with a 32-11 overall record, stepping away from Pac-12 play with a 13-8 mark with one weekend remaining next week at Stanford. The Huskies took two of three games at home against Utah last weekend, winning seven of their last 10 overall.

“I think we understand what a pivotal series this could be for our team and that this weekend can only help us,” Torina said. “We know that Washington has a great pitching staff and we know we’re going to go up against a great offense, so it’s up to us to show up and compete and do what we know we can.”

While Sunday might not be the final home games this season with possible postseason hosting duties on the horizon, the rest of the team will have a chance to thank the group of seniors departing, who have accounted for an average of 40-plus wins and a Women’s College World Series berth to their credit.

“They are just such a special group of young women who have given everything to this program,” Torina said. “They’ve embodied what it means to be a Fighting Tiger and we are so happy to be able to honor them this weekend.”