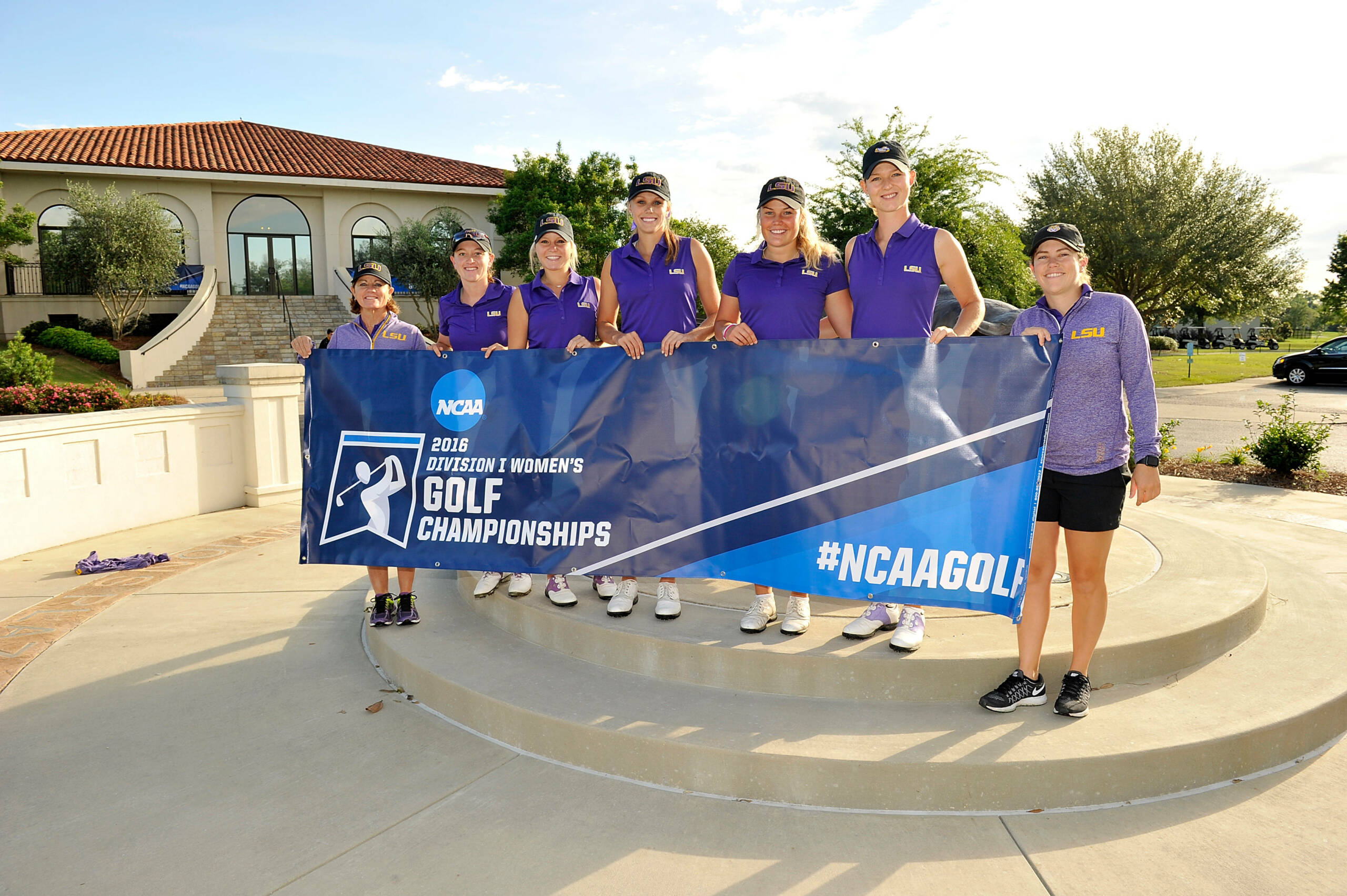 BATON ROUGE – The LSU Lady Tigers will be looking to work their way through the field and earn a spot in the NCAA Championships as the LSU Athletics Department hosts the NCAA Baton Rouge Regional women’s golf tournament at the University Club.

The field of 18 teams and six individuals will play 18 holes Thursday, Friday and Saturday with the top six teams advancing to the NCAA Women’s Golf Championships later in May in Eugene, Oregon. Also, three individuals not on those six teams will advance as well.

This marks the fourth time LSU has hosted an NCAA women’s regional event, but the first time since the LSU home course was renovated in 2010. The Lady Tigers hosted the first East regional at Santa Maria in 1993 and then on the original University Club layout in 2002 and 2007.

Ironically, in both of those years, the Duke Blue Devils won the regional and went on to win two of their six NCAA women’s titles in those seasons. On a sunbaked course with no wind in May 2007, the Duke team led by a 63 from Amanda Blumenherst posted a score of 16-under par 272 to win the regional.

But this is 2016 and the University Club layout tests mind and ability as the players may have found out during the second half of their practice round today when the wind picked up which in turn also helped dry out the course from the rains of the last week.

That will be the scenario when Thursday’s opening round commences with tee times running off the first and tenth tees from 7:30 a.m. to 9:45 a.m.

The practice round “was really good,” said LSU Coach Karen Bahnsen as she will take her 22nd team to an NCAA region in the 24 years of the competition. “I’m really impressed with the golf course and the way that it is drying out. It is in remarkably great shape for the weather we have had the past week. This is their home course. They know a lot about what to do out here, but we just had to remind them just don’t overthink this golf course. Just go out and continue to play, but play smart.”

One interesting thing is that LSU in the first wave could get out and get some play in before the winds kick into double figures around 11 a.m.

“Well, I think we may get nine holes in without the wind because that’s about what it did today,” said Bahnsen. “That would be great. But the wind is good for the course right now because it helps it dry out. But it also makes it a more difficult course to play because a north wind is a very difficult wind for this course.”

The Lady Tigers will go with the lineup that it has used for most of the spring as LSU has had to go without its junior All-America Caroline Nistrup and sophomore Claudia De Antonio. But the Lady Tigers have youth and experience on its side and there is an air of confidence that a run could be made that could send LSU back to the championship for a second straight year.

Freshman Kathleen Gallagher follows in the footsteps of her mom, Cissye Meeks, who played on the 1986 NCAA team for the Tigers coached by second year coach Karen Bahnsen. Meeks and her husband, multiple PGA winner and Golf Channel analyst Jim Gallagher, Jr., will be on hand to watch Kathleen who has three top 13 finishes this season and a team-best 74.48 stroke average.

Marina Hedlund will play from the five spot in the play five, count four scoring system of college golf and she will make her fourth straight tournament appearance for LSU with a season stroke average of 77.44.

LSU’s two seniors will be counted on for the experience factor of playing in postseason. Nadine Dreher of Austria comes in averaging 76.19 strokes a round, while Mandeville’s Elise Bradley comes in second on the team in strike average at 75.30 strokes. She won the Tiger Golf Classic on this course in sudden death in 2015.

“Basically, we just wanted to get here (to the regional),” said Bahnsen. “Now that we are here it’s a new ball game. Let’s go play golf. They’ve taken their exams. The load is off their shoulders. They are here and I think they have a lot of confidence on this golf course and they feel good about themselves.”

Duke is the highest ranked team in the Golfstat rankings at No. 4 with Florida 5, Arizona State 10 and Washington 13. Coach Dan Brooks saw plenty of the course when his Blue Devils won the LSU Tiger Classic in March.

“It’s a course where having been on it was a good thing,” Brooks said. “They are going to have vivid memories of March. The regionals always require you to really, really get focused and play hard. There are a lot of people with nothing to lose attitudes. We’ve got to be really ready to play.”

With Duke, Florida and Arizona State in the final wave of the first day beginning at 9:09 a.m., four of the top 16 golfers in the country will be in action – Monica Vaughn (2) and Linnea Strom (6) of Arizona State, Leona Maguire (12) of Duke and No. 16 Maria Torres of Florida.

Live scoring for the regional can be found at LSUsports.net/NCAAWG through Golfstatresults.com. Updates throughout the round on LSU and the tournament will be available @LSUwomensgolf and on Facebook at www.Facebook.com/LSUwomensgolf.