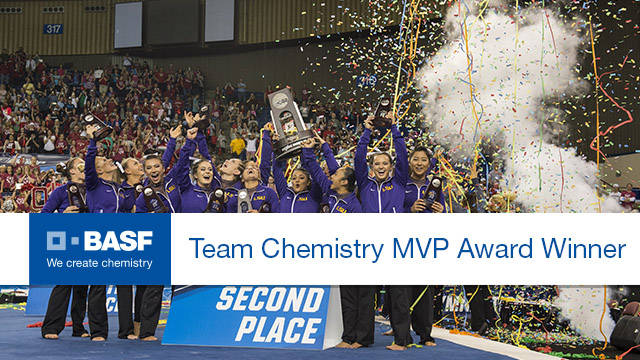 BATON ROUGE, La. – With a score of 197.4500 last month at the Fort Worth Convention Center to finish as national runners-up at the NCAA Super Six, the LSU gymnastics team has earned the BASF Team Chemistry MVP Award for the month of April.

Earning a spot in the national championship meet for the third time in four years and fifth time overall, the Tigers recorded their highest-ever finish on the national stage, besting the third place finish from the 2014 season. LSU compiled a 31-6 overall record, the first time in school history LSU has reached the 30-win milestone.

In her 39th season at the helm of the program, head coach D-D Breaux reached the exclusive 700 career wins milestone at the NCAA Championships, pushing the Tigers to an 18-4 record in the postseason, the most in a single season in LSU history.

Gymnasts Sydney Ewing, Sarah Finnegan, Ashleigh Gnat, Myia Hambrick, Lexie Priessman and Jessica Savona earned All-America honors in the 2016 season, combining as a group for 17 total All-America honors. Gnat on the year earned SEC Specialist of the Year and NACGC/W Central Region Gymnast of the Year honors, as the junior led the nation and set the LSU single-season record with six perfect 10.0 scores, including a school single-season record four on floor exercise.

LSU is expected to return 20 of 24 routines for the 2017 season. The Tigers will also return six All-Americans as well as welcome three talented newcomers in Kennedi Edney, Ruby Harrold and Ashlyn Kirby.