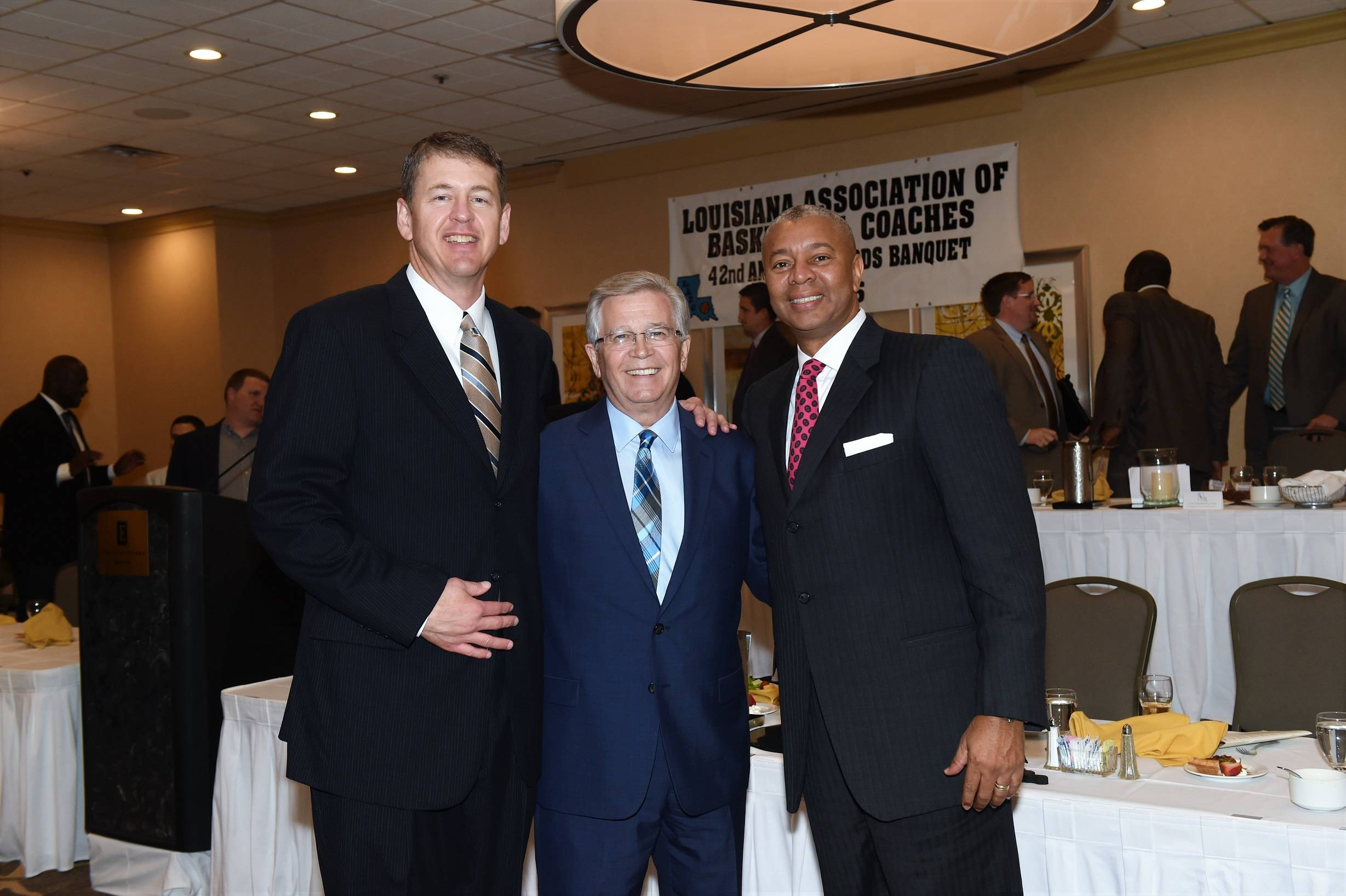 BATON ROUGE — The coach who transformed Nicholls State University into a championship basketball program in the 1990s and the man who became the “Voice of the Tigers” for generations of LSU basketball fans were the major honorees at Saturday’s 42nd Annual Louisiana Association of Basketball Coaches Awards Banquet.

The other major honoree was former LSU radio announcer Jim Hawthorne, who received the LABC’s Mr. Louisiana Basketball award. This award is given annually to someone who has made a significant, long-term contribution to the game of basketball at any level in the State of Louisiana.

Also honored at the banquet were Louisiana’s major college, small college, junior college and high school basketball players and coaches of the year, along with the top pro player from the state.

Hawthorne retired this year as the radio announcer for LSU basketball after a distinguished 36-year career as one of the top play-by-play men in all of collegiate athletics. He called some of the greatest moments in the history of Tigers basketball, including LSU’s Final Four appearances in 1981, 1986 and 2006 along with six SEC championships.

Hawthorne also introduced basketball fans to some of the best players to ever wear the LSU uniform in Shaquille O’Neal, Mahmoud Abdul-Rauf (then Chris Jackson), Rudy Macklin, Stromile Swift, Brandon Bass, Glen Davis and Ben Simmons. This summer he will receive the Louisiana Sports Writers Association’s Distinguished Service Award in Sports Journalism at the Louisiana Sports Hall of Fame ceremonies.

Broussard coached at Nicholls State from 1990 to 2002, where he won 150 games and finished his career as the second winningest coach in school history. He was a three-time Southland Conference Coach of the Year, two-time Louisiana Coach of the Year and once an NABC District Coach of the Year.

Broussard led the Colonels to two SLC regular season and tournament championships and two NCAA Tournament appearances, including seasons of 24-6, 19-9 and 19-10.

The LABC also presented the Pete Maravich Memorial Award, honoring Louisiana’s Major College Player of the Year, to freshman forward Ben Simmons of LSU. This season Simmons was a first team NABC and USBWA All-American and the consensus National Freshman of the Year. He averaged 19.2 points, 11.8 rebounds (1st in SEC and 7th in nation) and 4.79 assists and had 23 double-double games (1st in SEC and 5th in nation). He scored in double figures in 32 of 33 games, including eighteen 20-point games, and had single game highs of 43 points, 20 rebounds, 10 assists and 7 steals.

The Bob Pettit Award, which is given to Louisiana’s Professional Player of the Year, was presented to forward Paul Millsap of the Atlanta Hawks. In his tenth year in the NBA, the former Louisiana Tech star averaged 17.1 points, 9.0 rebounds and 1.7 blocks. Millsap had 32 double-double games and single game highs of 31 points, 18 rebounds, 8 assists and 6 blocks. He was also selected to play in the NBA All-Star Game for the third straight season.

Coach Roman Banks of Southern received the Tommy Joe Eagles Memorial Award as Louisiana’s Major College Coach of the Year. He led the Jaguars to the Southwestern Athletic Conference Tournament championship and to their first NCAA Tournament appearance in three years with a 22-13 record.

Senior point guard DeAngelo Coleman of LSU-Alexandria received the Louisiana Small College Player of the Year award after being named a first team NAIA All-American and the Red River Athletic Conference Player of the Year, while averaging 14.0 points and 3.90 assists and shooting 44.9% behind the three-point line.

D’Angelo McClinton and Coach David Francis of Southern-Shreveport were honored as the Louisiana Junior College Player and Coach of the Year, respectively. McClinton, a sophomore guard, averaged 18 points, 6 assists and 4 steals and was an NJCAA Region 23 All-Tournament selection. Francis led the Port City Jags to the Miss-Lou Conference championship and to the semifinals of the NJCAA Region 23 Tournament with a 19-9 record. This was Francis’ 12th conference championship in 16 seasons.