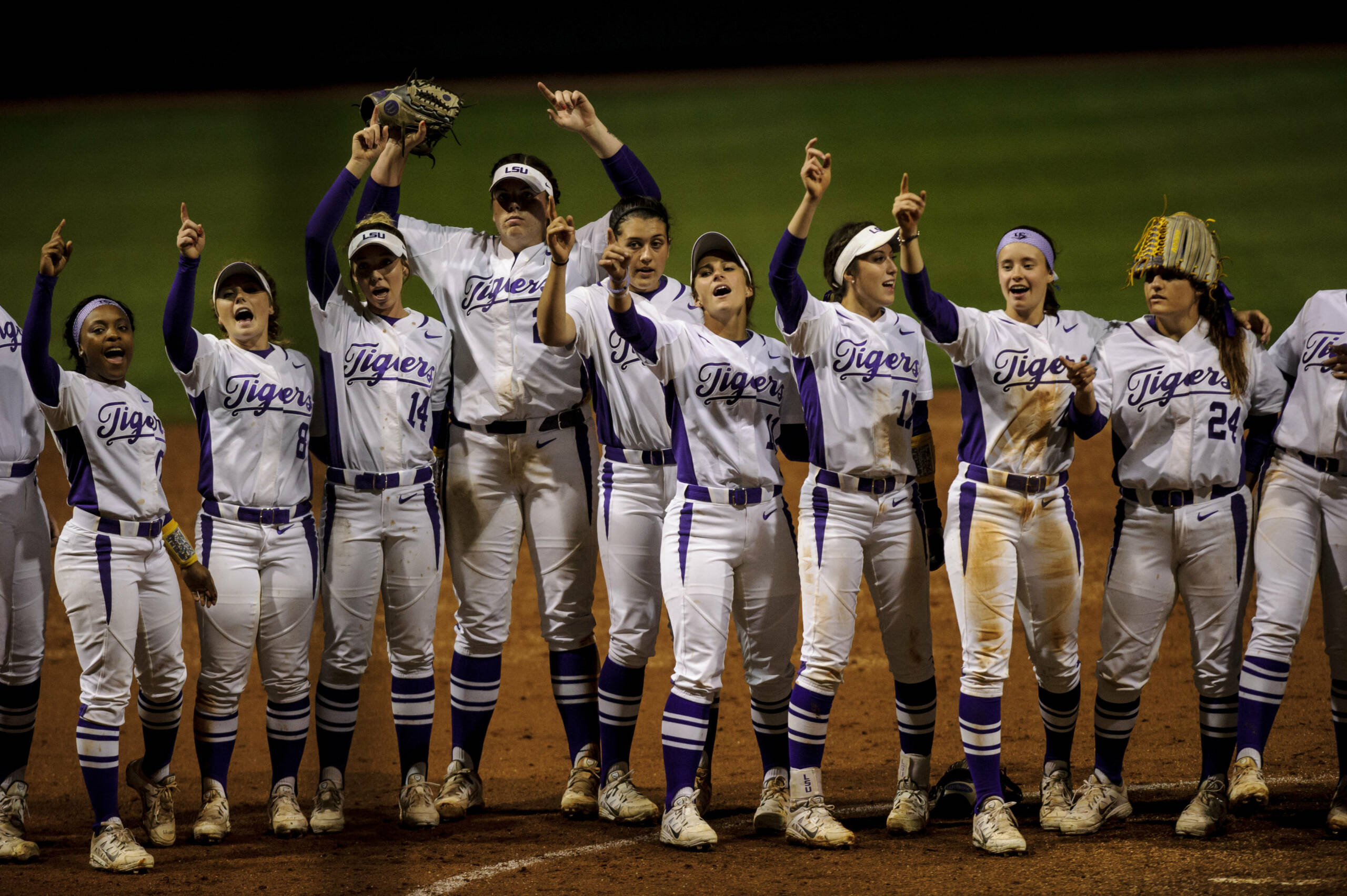 BATON ROUGE, La. – The No. 14 LSU softball team opens a three-game SEC series against the South Carolina Gamecocks this weekend, opening the set Friday evening with a 6 p.m. showdown at Tiger Park in Baton Rouge.

The first two games of the series on Friday and Saturday will begin at 6 p.m., with Sunday’s finale set for 1 p.m. SEC Network+ will have coverage of game two and three of the series, with Lyn Rollins and Yvette Girouard calling the action. All three games of the weekend will be aired on Talk 107.3 FM locally in Baton Rouge and at LSUsports.net for Geaux Zone subscribers.

This weekend is a special one for the program, as Saturday’s game is the fifth-annual “Strikeout Ovarian Cancer” game, as earlier that morning will be the fourth-annual “Geaux Teal Ovarian Cancer Walk.” Tiger Park will go teal with the team wearing special jerseys and batting helmets, as fans who wear teal can purchase a general admission ticket for $2. The first 1,000 fans through the gates will receive a teal koozie.

On Friday the first 750 fans through the Tiger Park gates will receive a light-up bracelet, welcoming patrons on East Baton Rouge Parish School night with $2 general admission tickets available with an EBR flyer. Sunday is “Geaux Play Day” as the team will welcome Geaux Play participants to the park, getting the chance to run on the field postgame.

The Tigers opened its home stand on Wednesday, and after pushing through a weather delay that lasted over two hours, LSU earned a 6-1 win over the Northwestern State Lady Demons 6-1 to improve the team’s overall record to 33-13 on the season. The win kept LSU undefeated in midweek games on the year, while also keeping the squad undefeated against Louisiana teams this season.

Winners of their last three, the Tigers are going into this weekend’s showdown against the Gamecocks looking to continue their upward in all facets, expecting to have a solid showing this weekend in the team’s final SEC home weekend of the season. With 10 games remaining in the regular season, LSU is not overlooking any remaining opponent coming up.

“I think our mindset isn’t any different now than where we’ve been all season long, but we’re just taking everything one game at a time,” head coach Beth Torina said. “That’s always been our focus and where it will continue to be.”

The delay seemed to actually help the squad, as after two scoreless innings before play was halted LSU scored three runs in the third, another in the fourth and two more in the sixth, while Northwestern State mustered just one on three hits for the remainder of the contest. The Tigers are hitting .323 as a team going into the weekend, outhitting their opponents in four of the last five games.

Two players who are tied for the team lead in multi-hit games each produced their 13th of the season in junior Sahvanna Jaquish and sophomore Emily Griggs, combining for four of LSU’s seven hits in the contest.

Jaquish currently leads the team with a .347 batting average, as she clobbered her 11th home run of the season to open the scoring leger for the team against the Lady Demons on a three-run shot. Jaquish is tied for the team lead in RBIs with 47, while two off the lead for the most hits.

The player tied for the team lead in total hits is Griggs, who earned multiple hits for the third straight game and is currently on a five-game hitting streak heading into the weekend. She, along with junior Bailey Landry, leads the team with 45 hits, with Sandra Simmons right behind with 44 and Jaquish with 43.

In the circle, Allie Walljasper earned her seventh win of the season as she scattered the three NSU hits Wednesday night, striking out seven and walking one. The seven strikeouts was one shy of tying her season high, as she lowered her ERA to 1.67 on the year.

As a staff, LSU’s pitchers sport an ERA of 1.90 which is headlined by Carley Hoover’s 12 wins to lead the group, while Sydney Smith has the lowest ERA at 0.74 with an 8-2 overall record. On Thursday, Smith was selected to the Schutt Sports/NFCA Division I National Freshman of the Year Top 25 list, as a Tiger player has been on every opening list in each of the last three seasons.

South Carolina comes in with a 32-13 overall record and a 5-10 league mark, dropping a 6-4 midweek game to Georgia Southern in Columbia on Tuesday. Last weekend the Gamecocks dropped two of three games at Ole Miss, winning the finale 7-5 to stave off a sweep at home.

LSU has won eight of the last 10 meetings against South Carolina, taking the last series between the two in Columbia back in 2014. The last time the series was in Baton Rouge the Tigers won two-of-three to claim that series.

“They are a really solid team, and they have been for several years,” Torina said. “They swing big and their offense has some really great moments. In the circle Nickie Blue is capable of a great game on any day. She’s a special pitcher that you have to respect and game plan for.”