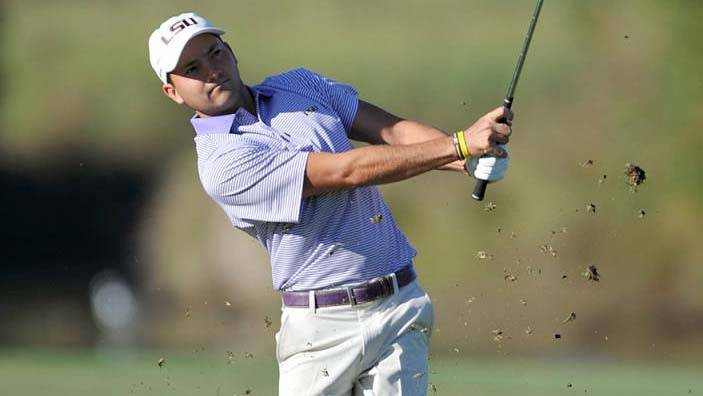 BATON ROUGE – As Zach Wright teed off in the first round of the SEC Men’s Golf Championships on Friday morning, Golf Channel’s Morning Drive program featured LSU’s senior All-American as a member of Team USA that will compete at the 2016 Arnold Palmer Cup at Formby Golf Club in Merseyside, England, later this summer.

Wright earned an automatic selection to represent the United States in the Ryder-Cup-style collegiate event with his top-six ranking at No. 3 in the final Arnold Palmer Cup Ranking released Friday.

It marks the third time in four seasons that an LSU Tiger will feature at the Arnold Palmer Cup after former All-Americans Stewart Jolly joined Team USA in 2014 and Ben Taylor played for Team Europe in 2013 following his final season at Nova Southeastern University in Florida. Taylor transferred to LSU that summer and played for the Tigers in his final two seasons at the collegiate level.

It’s official! Zach Wright has been named to the @ArnoldPalmerCup team for #TeamUSA LIVE on @GCMorningDrive! pic.twitter.com/loqtfchEgs

Wright has performed like a true Ben Hogan Award candidate throughout the spring season while winning three tournament titles in his five starts since February while rising to the No. 9-ranked collegiate player in the country in both the Golfstat and Golfweek player rankings released this week.

Wright opened the spring season by leading the Tigers to the team title at The Prestige at PGA West while being crowned the individual champion with a career-low tournament score of 12-under par 201. He then won individual titles at the Valspar Collegiate Invitational with a winning score of 2-under 211 and tying for the top spot at the Tiger Classic with Gagne and Ricard with a score of 1-under 143. Wright leads the Tigers into their SEC-title defense with a career-low 71.24 scoring average while earning six top-five and seven top-10 finishes on the season.

That performance has seen the senior from Phoenix, Arizona, steadily climb the Arnold Palmer Cup Ranking this spring after initially cracking the Top 20 in the first ranking released from the Golf Coaches Association of America on March 3 as the No. 18-ranked American in college golf. Wright then soared to No. 11 on March 17 before cracking the Top 5 at No. 5 on March 31.

The 2016 Arnold Palmer Cup will be held on June 24-26 at Formby Golf Club in Formby, Merseyside, England, as the Americans arrive as the defending champions following their 18-12 victory over the Europeans at Rich Harvest Farms in Sugar Grove, Illinois, last summer. It has been five years since the cup holder has defended its title when Team USA kept the cup in 2011 following its victory a season before.