No. 3 Gymnastics to Compete for a Spot in Super Six 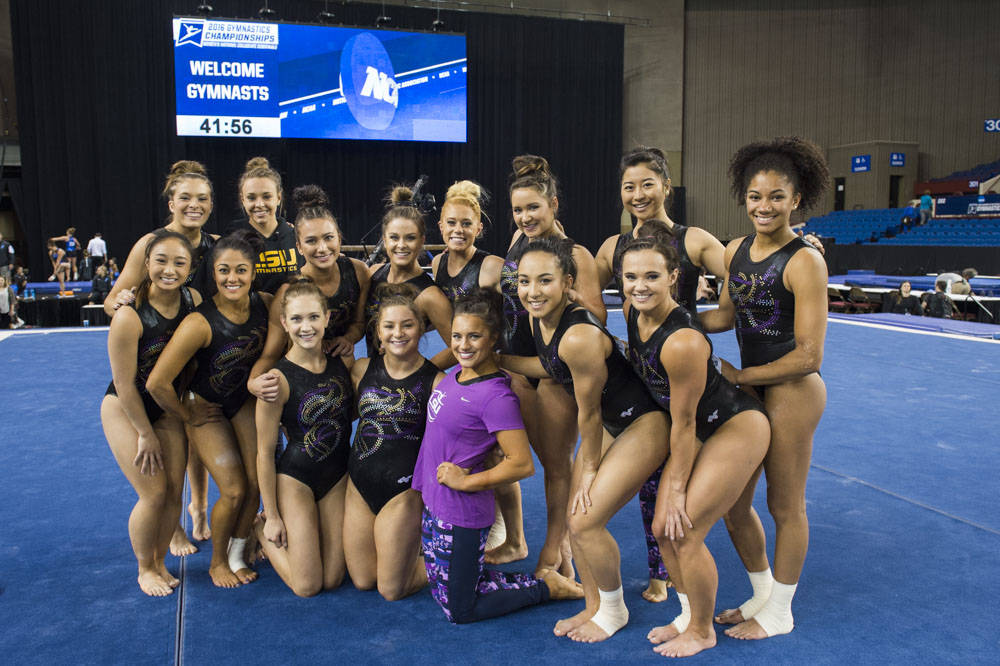 FORT WORTH, Texas – The third-ranked LSU gymnastics team will compete on the sport’s biggest stage as the Tigers fight for a fifth NCAA Super Six appearance in NCAA Semifinal I at 1 p.m. CT Friday in Fort Worth Convention Center Arena.

Making its 27th overall appearance at the NCAA Championships, LSU (23-4) will take on No. 2 Florida, No. 6 Auburn, No. 10 Georgia, No. 14 Minnesota and No. 18 Stanford in the semifinal for one of three coveted spots in the Super Six.

“This team is extremely prepared for anything,” LSU head coach D-D Breaux said. “We are excited. I just want to remove the clutter and let this group go out there and have a ball.

“I want our gymnasts to show consistency – step up on the podium, enjoy the experience, smile in the beginning and smile at the end. If that’s happening, we’re being successful.”

This marks LSU’s second competition in Fort Worth Convention Center Arena this season as the Tigers competed in the Metroplex Challenge on Jan. 30.

LSU enters the semifinal with confidence after capturing a fourth-straight NCAA Regional title by winning in Athens, Ga. The Tigers posted a 197.300, a score that ranked as the second highest of any team in a regional.

In the semifinal LSU will have the exact same rotation it had at the regional. The Tigers will open the meet on the bye before bars and rotate to bars, beam, bye, floor and vault. In fact, it is the fourth-consecutive meet in which LSU will compete bars, beam, floor and vault in that order.

Auburn will start on vault, Stanford on bars, Georgia on beam, Florida on the bye before floor and Minnesota on floor.

The meet will air live on ESPNU, and fans can watch several live streams on WatchESPN.com.

Bart Conner, Kathy Johnson Clarke and Laura Rutledge will have the call of both semifinals and the Super Six.

Each of the six teams in the semifinal has at least one gymnast ranked in the Top 25 in the all-around, including Florida’s Bridget Sloan who ranks No. 1 overall.

Myia Hambrick ranks 10th in the all-around for the Tigers, and she is also 17th on bars, 24th on vault and 25th on beam.

Ashleigh Gnat ranks No. 1 nationally on vault and floor and 17th on beam. Sarah Finnegan is No. 4 on beam and No. 11 on bars.

Sydney Ewing is 10th on vault, Erin Macadaeg is 23rd on beam and Randii Wyrick is 24th on floor.

The top three finishers in semifinal I will meet the top three teams from semifinal II in the Super Six at 8 p.m. CT Saturday. The second semifinal is comprised of No. 1 Oklahoma, No. 4 Alabama, No. 5 Utah, No. 8 UCLA, No. 9 California and No. 12 Nebraska.

Fans can connect with the team on LSU’s social media outlets: Facebook.com/LSUgym, @LSUgym on Instagram, Snapchat and Twitter and YouTube.com/lsugymnastics.