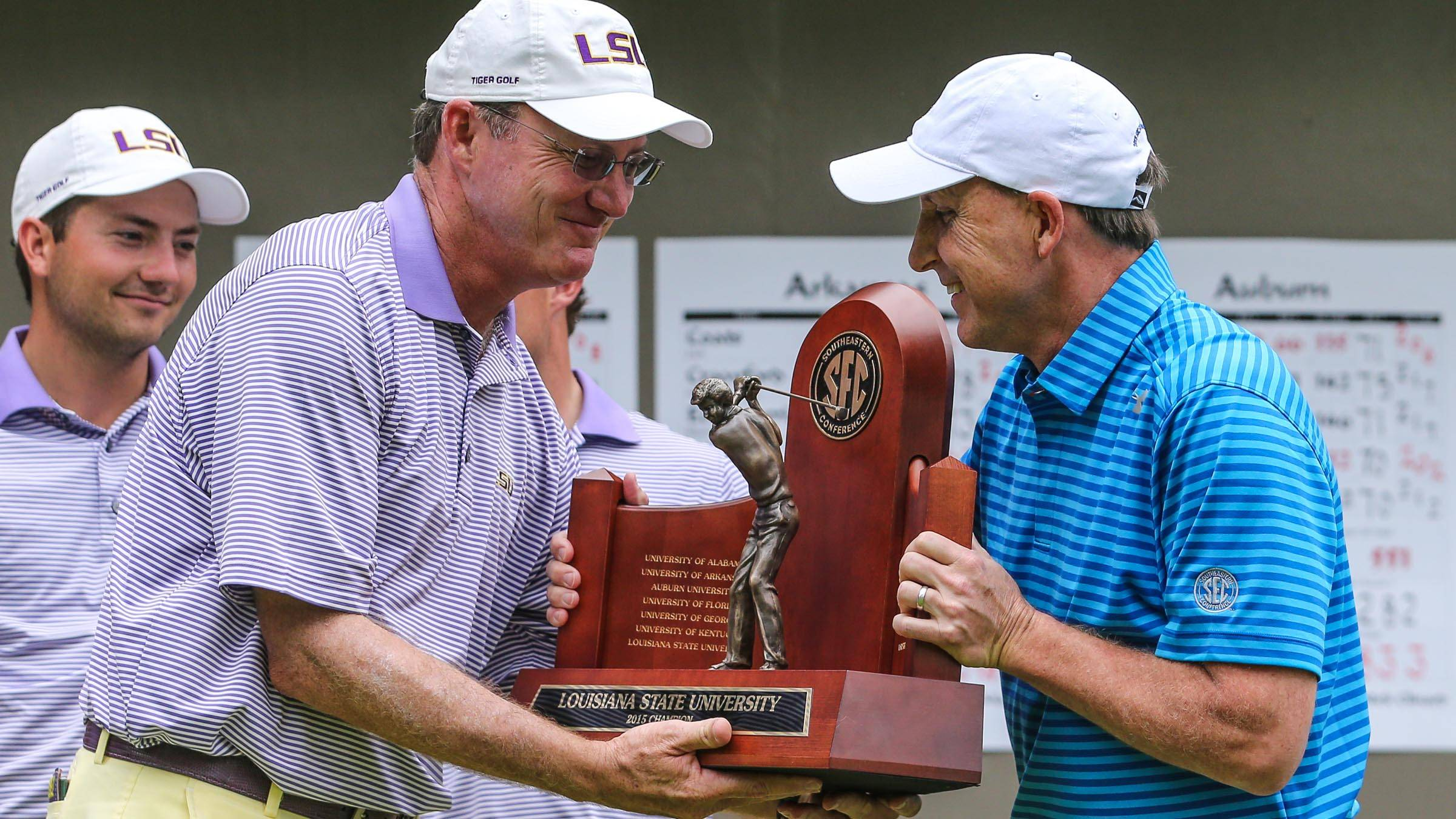 BATON ROUGE – For the first time in 28 years, the LSU Tigers will tee off as the defending Southeastern Conference Champions as they look to retain their conference title from a year ago at the 2016 SEC Men’s Golf Championships beginning with Friday’s first round at Sea Island Golf Club’s Seaside Course in St. Simons Island, Georgia.

The Tigers captured their first SEC title since 1987 last spring when they came from five strokes behind on the back nine to score a three-shot victory over Vanderbilt and South Carolina at Sea Island Golf Club.

They fired a winning score of 13-under par 827 to finish three shots clear of the field and take home their 16th SEC Championship in the program’s history to rank second among all SEC programs behind only the 26 titles claimed by the Georgia Bulldogs. It was a victory that sparked a title sweep in 2015 as the Tigers were also crowned NCAA Champions to cap a historic 2014-15 season.

The Seaside Course at Sea Island Golf Club will play host to the three-day, 54-hole championship for the 14th time in 16 seasons as the course will play to a par 70 and 7,055 yards for the tournament.

LSU is among eight teams ranked in this week’s Golfstat Top 25 heading into the tournament as No. 4 Georgia, No. 6 Auburn, No. 7 Vanderbilt, No. 13 South Carolina, No. 17 Alabama, No. 18 Florida and No. 23 Arkansas are among the title contenders at Sea Island. Rounding out the 14-team field are Kentucky, Mississippi State, Missouri, Ole Miss, Tennessee and Texas A&M.

Teams will follow Friday’s opening round by playing the second round on Saturday and third round on Sunday with pairings yet to be determined. The Tigers are paired with both Alabama and South Carolina during the first round as they will tee off in the second wave of teams off the first tee beginning at 7:20 a.m. CT.

The Tigers have certainly hit their stride ahead of the championship season winning two team titles and earning two runner-up finishes in their five tournament appearances during the 2016 spring season.

After opening the spring campaign with a record-breaking victory at The Prestige at PGA West on Feb. 17, LSU captured its third team championship of the 2015-16 season at its own Tiger Classic on March 29 between a pair of second-place finishes as part of elite fields at the Valspar Collegiate Invitational on March 22 and Aggie Invitational in the team’s regular-season finale on April 3.

Three Tigers return from LSU’s SEC-title-winning lineup a season ago as senior All-American Zach Wright and junior All-Americans Brandon Pierce and Eric Ricard join freshmen Sam Burns and Luis Gagne in defending its crown this weekend. Wright is making his fourth career start at the SEC Championships, while Pierce and Ricard make their second SEC start and Burns and Gagne make their debut in the event.

Wright has performed like a true Ben Hogan Award candidate throughout the spring season while winning three tournament titles in his five starts since February while rising to the No. 9-ranked collegiate player in the country in both the Golfstat and Golfweek player rankings released this week.

Wright opened the spring season by leading the Tigers to the team title at The Prestige at PGA West while being crowned the individual champion with a career-low tournament score of 12-under par 201. He then won individual titles at the Valspar Collegiate Invitational with a winning score of 2-under 211 and tying for the top spot at the Tiger Classic with Gagne and Ricard with a score of 1-under 143. Wright leads the Tigers into their SEC-title defense with a career-low 71.24 scoring average while earning six top-five and seven top-10 finishes on the season.

Gagne has been a revelation for the Tigers since rejoining the lineup for the first time this spring and making his first collegiate start in six months at the Valspar Collegiate Invitational where he tied for third place in the event. That’s where he fired a 1-under 212 for three rounds to finish just one shot behind Wright for the title. Gagne has since fired 1-under par in his last two starts as he tied for the top spot at the Tiger Classic before tying for fourth place at the Aggie Invitational two weeks ago.

Gagne follows Wright as the team’s second-leading scorer with a 72.64 scoring average in his four career appearances. Burns ranks third on the team with a 72.88 scoring average, while Pierce averages 73.70 and Ricard averages 73.73 strokes per round as they tee off at this year’s SEC Men’s Golf Championships.

While former All-American Stewart Jolly earned the team’s best finish by tying for fourth place a year ago, Wright tied for sixth and Pierce tied for ninth in leading the Tigers to the SEC team title a season ago.

After competing at the 2016 SEC Men’s Golf Championships this weekend, the Tigers will await their ninth-straight NCAA Regional selection as they open up their NCAA-title defense at one of six regional host sites this spring being held May 16-18. Thirty teams will qualify for the 2016 NCAA Division I Men’s Golf Championships that follow from May 27-June 1 at Eugene Country Club in Oregon.