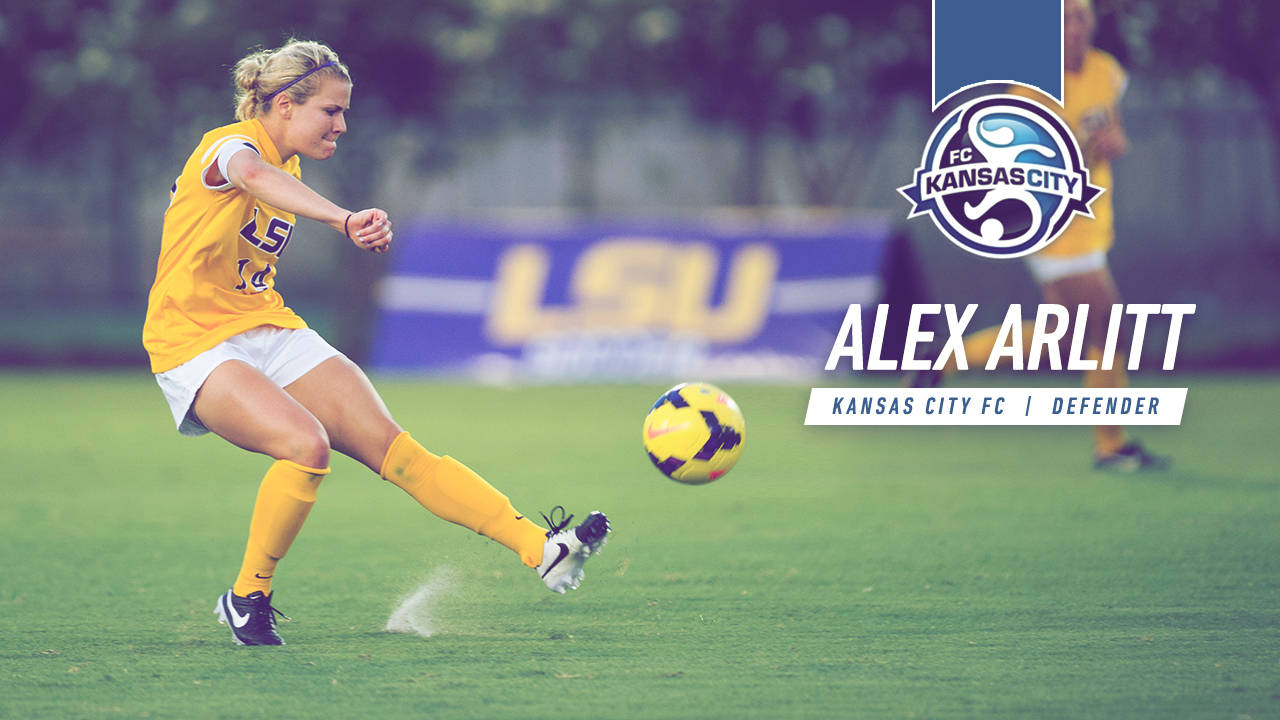 BATON ROUGE – Alex Arlitt’s professional soccer career is officially underway as she was named Monday to the regular-season roster for two-time defending National Women’s Soccer League champion Kansas City Football Club as the team prepares to open its 2016 season on Saturday with a home match against Western New York Flash.

Arlitt, drafted by the club with the 38th overall pick in the fourth round of the 2016 NWSL College Draft in January, is among 20 members of the team’s regular-season roster to being the 2016 season.

The Houston native was rewarded by Kansas City FC for her strong preseason performance with her first professional contract as she looks to earn her place in defense for a team looking to win its third-straight NWSL championship this season. She is among six defenders in the squad as she joins the likes of Katie Bowen, Amanda Frisbee, Brianne Reed, Becky Sauerburnn and Brittany Taylor.

Arlitt is among two former LSU Tigers named to NWSL regular-season rosters by the clubs Monday as Canadian Women’s National Team left back Allysha Chapman returns for her second season with the Houston Dash in 2016. A FIFA Women’s World Cup veteran, Chapman has been capped 30 times by Canada at the senior level while making 24 starts for her country on the international stage.

“We’re very proud that two Tigers will be on NWSL rosters this season,” said LSU head coach Brian Lee. “Chappy is one of the best left backs in the world right now, and it’s great to see her back with the Dash this year. Alex has had a great preseason with Kansas City, and it’s exciting to see one of our own playing for the defending champions.”

Arlitt enjoyed one of the most heralded careers by a defender in the history of the LSU Soccer program while appearing in 89 matches with 87 starts for the Tigers during her time in Baton Rouge from 2011-15.

She finished her career this fall ranked No. 3 in school history in total appearances and tied for No. 2 in school history in career starts as one of the most reliable Tigers to ever wear the purple and gold. Arlitt was part of two NCAA Tournament teams in her five seasons as her career was bookended by postseason qualification as a freshman in 2011 and as a senior in 2015 while captaining the side.

One of the most versatile players in the team’s history while playing virtually every position in the midfield and on the back line, Arlitt scored nine goals and dished out seven assists for 25 points in the attack during her time in Baton Rouge. Earning a selection to the SEC All-Freshman Team by the league’s head coaches in 2011 and being named a Second-Team All-SEC performer by College Sports Madness in 2013 were among her top accolades earned in a decorated career with the Tigers after signing from Clear Lake High School in Houston.

Also a standout in the classroom, Arlitt graduated in May 2015 with her undergraduate degree in accounting before pursuing her Master’s in Accounting. She was a four-time selection to the SEC Academic Honor Roll in her five years while also being named a Capital One First-Team Academic All-District VI performer in 2013 as a true team leader both on and off the field.