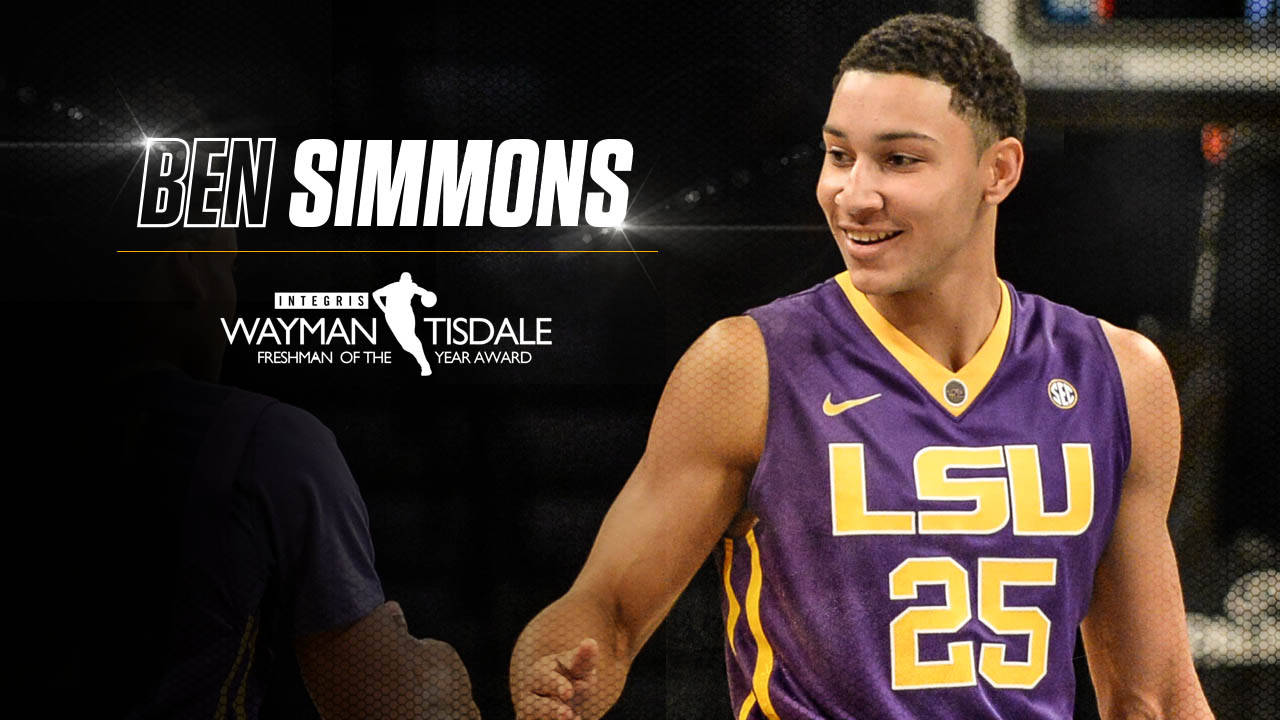 The award is presented by the United States Basketball Writers Association which has chosen a national freshman of the year since the 1988-89 season when LSU’s Chris Jackson (Mahmoud Abdul-Rauf) was the recipient. Other previous winners of the award include Kevin Durant, Carmelo Anthony, Jason Kidd and Chris Webber. The 2015-16 season marks the sixth year the award has been named in Wayman Tisdale’s honor.

“It’s an amazing experience just being here,” Simmons said after the ceremony. “I would like to thank the Tisdale family and the USBWA for noticing me. Thanks also to Integris for sponsoring this event and the award. I’m humbled and it’s an honor for a kid from Australia to be in this position.”

Simmons led all Division I freshman with an 11.8-rebound average and was third among all freshman in scoring at 19.8 points per game. Simmons also ranked fifth nationally among all players with 23 double-doubles and shot 56 percent from the field. He was the first Southeastern Conference player since assists became an official NCAA stat in 1969 to finish in the top five in points, rebounds and assists (4.8).

“It was an outstanding evening here at the College Basketball Awards and to see the honorees of the basketball writers,” said LSU Coach Johnny Jones. “For Ben to have the opportunity to be the recipient of such a distinguished award as the Wayman Tisdale Freshman of the Year says volumes. We know that he will be a worthy representative of the values that Wayman Tisdale believed in and the work his foundation continues to do in his name.”

The late Wayman Tisdale was a three-time USBWA All-American at the University of Oklahoma. Following a stint on the 1984 U.S. Olympic basketball team, he played 12 seasons in the NBA before retiring in 1997 to focus on a blossoming jazz music career. In March 2007, he was diagnosed with cancer and, following a courageous and difficult battle that included the amputation of his right leg in 2008, he passed away in May 2009.

The Integris Wayman Tisdale Freshman of the Year Award is produced by Access Sports, an Oklahoma City-based non-profit organization committed to supporting various charitable causes, including funding prosthetic devices for needy individuals through the Wayman L. Tisdale Foundation, educational scholarships through the U.S. Basketball Writers Association, and funding of youth basketball programs throughout the state of Oklahoma through Wayman’s Lightning Basketball League.

Simmons was accompanied to the results by his father, David Simmons, his brother Liam and LSU men’s basketball Coach Johnny Jones.