Battle On The Bayou Women's Preview 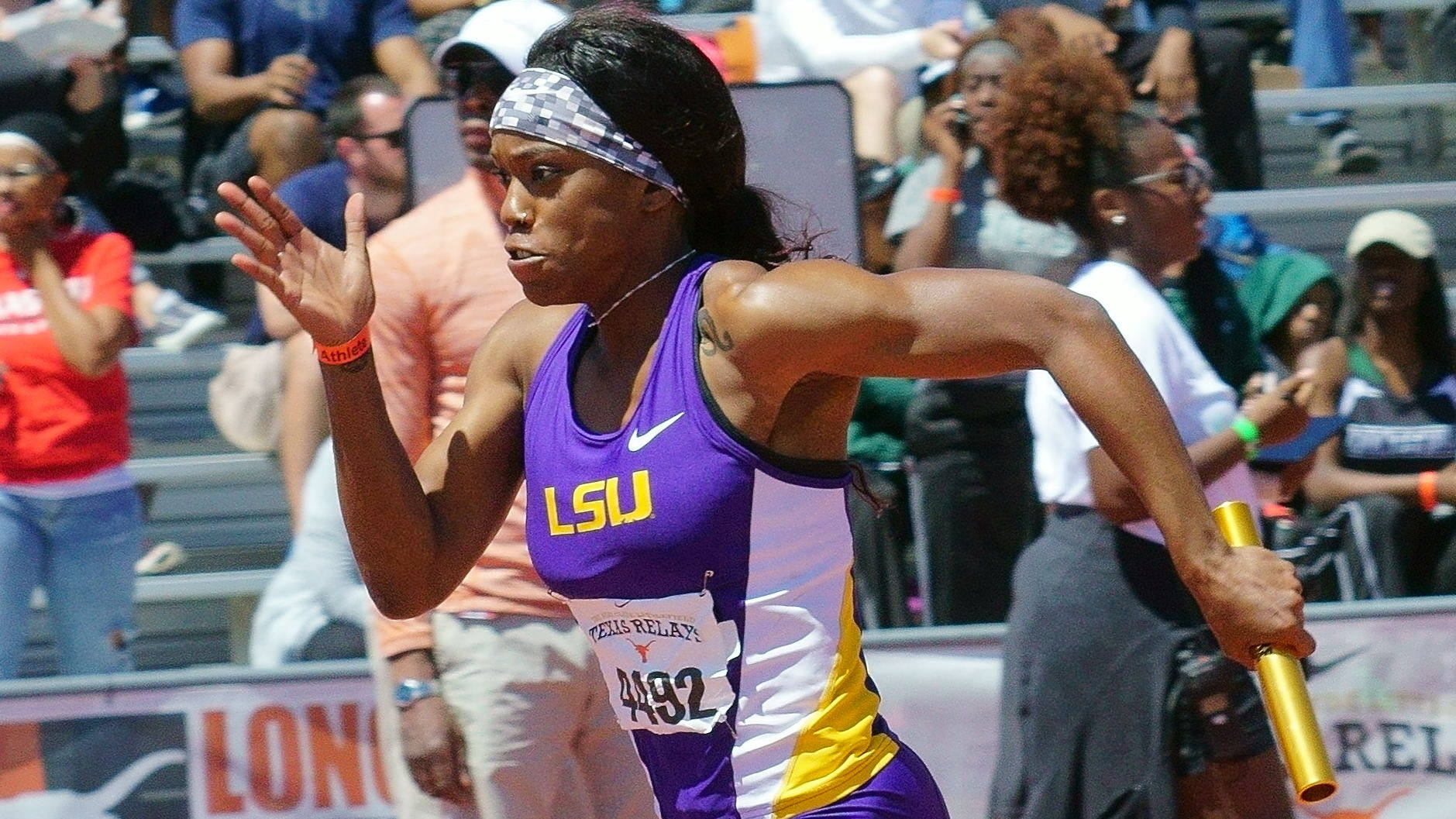 BATON ROUGE – Saturday’s sixth-annual Battle on the Bayou will match conference against conference as many of the nation’s premier programs from the Southeastern, Big 12 and Big Ten conferences square off at the Bernie Moore Track Stadium in one of the signature events of the collegiate calendar this weekend.

A loaded women’s field will compete in the tri-conference competition as the No. 3-ranked Lady Tigers welcome six other programs from across the country to Baton Rouge. Each of the seven teams in the field rank in the Top 35 nationally in this week’s national power rankings released by the U.S. Track & Field and Cross Country Coaches Association.

Saturday’s afternoon session will get underway at Noon CT following a brief opening ceremony while the action continues through the running of the 4×400-meter relays at 4:05 p.m. Action gets underway for the sixth Battle on the Bayou with the morning session at 9 a.m. at the Bernie Moore Track stadium.

Today we preview the women’s teams competing at the sixth-annual Battle on the Bayou, listed in order of their position in the latest USTFCCCA national power rankings published on Tuesday. Be sure to check out an in-depth preview posted Thursday of the men’s teams representing the SEC, Big 12 and Big Ten conferences during Saturday’s competition.

LSU Lady Tigers
USTFCCCA Ranking: 3
2016 NCAA Indoor Finish: T14
2015 NCAA Outdoor Finish: 11
Team Capsule: LSU’s young sprint squad has certainly been on show in the opening weeks of the outdoor season as the Lady Tigers are coming off a sprint relay double with wins at the 4×100-meter and 4×200-meter relays at the Texas Relays last weekend. While winning the women’s 4×100-meter relay title, their team of junior Rushell Harvey, freshman Kortnei Johnson, junior Jada Martin and sophomore Mikiah Brisco teamed to run the No. 2-ranked sprint relay in the NCAA this season at 43.25 seconds. Brisco, a two-time NCAA Indoor All-American in the 60-meter dash, is set to make her outdoor debut in the 100-meter dash at the Battle on the Bayou. Johnson and Harvey will also line up in the 100 meters on Saturday as the NCAA’s No. 6-ranked and No. 7-ranked performers through three weeks of the outdoor season with seasonal-best times of 11.27w and 11.28w, respectively. Martin, the eighth-place finisher nationally in the 200 meters a year ago, also debuts in her specialty during Saturday’s competition. The Lady Tigers also feature one of the nation’s premier dual hurdlers in senior Chanice Chase as she makes her season debut in the 100-meter hurdles while also doubling in the 400-meter hurdles at the Battle on the Bayou. An NCAA finalist in both events during her career at LSU, Chase already ranks No. 4 nationally in the 400 hurdles this season with her season-opening run of 57.08 at Miami’s Hurricane Twilight two weeks ago. Junior All-American Nataliyah Friar is coming off a big win in the women’s university long jump at the Texas Relays a week ago where she opened her season with the NCAA’s No. 6-ranked jump of 20 feet, 8 ½ inches. She looks to make it two in a row at the Battle on the Bayou as she is entered in the event on Saturday afternoon.

Kansas State Wildcats
USTFCCCA Ranking: 10
2016 NCAA Indoor Finish: 8
2015 NCAA Outdoor Finish: T9
Team Capsule: The strength of Kansas State’s women’s team this season lies in the field events, and the Wildcats will feature NCAA-title and All-America hopefuls in events ranging from the high jump, shot put, discus and hammer during Saturday’s Battle on the Bayou. Two NCAA-title contenders making their outdoor season debuts this weekend will be Kimberley Williamson in the high jump and Dani Winters in the shot put. Winters steps into the shot put ring for the first time since being crowned the NCAA Indoor Champion in the event last month with a winning throw of 58-11 ½ at the national meet. She looks to add an NCAA Outdoor title to her resume after placing fourth nationally at the NCAA Division I Outdoor Track & Field Championships in Oregon last June. Williamson, the 2015 NCAA Outdoor Silver Medalist and 2016 NCAA Indoor Bronze Medalist in the high jump, opens up her outdoor season as a favorite to win Saturday’s event with a lifetime PR of 6-2 ¾ to her credit. Two other Wildcat throwers competing Saturday arrive in Baton Rouge with Top 10 rankings in the NCAA to their name as Sara Savatovic owns the nation’s No. 4-ranked throw of 213-3 in the hammer and Shadae Lawrence boasts the No. 8-ranked throw this season at 185-0 in the discus.

Mississippi State Bulldogs
USTFCCCA Ranking: 11
2016 NCAA Indoor Finish: DNS
2015 NCAA Outdoor Finish: 18
Team Capsule: Erica Bougard is an NCAA-title contender in her own right as she competes in her final season outdoors for the Bulldogs as one of the nation’s leading multi-event athletes. A former NCAA Indoor pentathlon champion, Bougard looks to add an NCAA Outdoor title in the heptathlon to her resume after earning a career-best finish of fourth place at the national meet last June. Her multi-event talents will certainly be on display Saturday as she is entered in four events at the Battle on the Bayou in the 100-meter hurdles, high jump, long jump and javelin. She currently ranks No. 2 in the NCAA this season with a clearance of 6-2 in the high jump and also ranks No. 9 nationally in the long jump with a seasonal-best mark of 20-5 ¾w. Mississippi State also features a talented middle distance squad, led by 2015 NCAA finalist Marta Freitas the NCAA’s fastest 1,500-meter runner this season. Freitas, who has run the 1,500 meters in 4 minutes, 12.91 seconds to lead the nation in 2016, will line up in the 800 meters on Saturday alongside teammate Ffion Price, who ranks No. 9 nationally in the 1,500 meters this spring. Cornelia Griesche is one Bulldog who will run the 1,500 meters on Saturday as she has earned a reputation as one of the nation’s leading steeplechasers with the fourth-fastest time in the country at 10:02.56 early on.

Oklahoma Sooners
USTFCCCA Ranking: 14
2016 NCAA Indoor Finish: 32
2015 NCAA Outdoor Finish: T15
Team Capsule: Saturday’s Battle on the Bayou will also feature the outdoor season debut for Oklahoma’s 2015 NCAA Outdoor Bronze Medalist Daye Shon Roberson as she will run her first 400-meter race of 2016. After featuring mostly on the Sooners’ sprint relay teams early in the season, Roberson will step onto the track in the event in which she set a personal best of 51.37 a season ago while also placing third nationally to lead her team to a Top 15 national finish to end 2015. Roberson is also a member of Oklahoma’s 4×400-meter relay team that enters the weekend with the No. 11-ranked time this season at 3:32.95. Oklahoma also returns two All-Americans in the throws this spring after Elizabeth Herrs also won an NCAA Outdoor bronze medal as the third-place finisher in the javelin and Julia Reedy placed fifth in the national final of the hammer throw at last year’s NCAA Outdoor Championships. Reedy is the No. 2-ranked collegian in the hammer through the first three weeks of the season with a mark of 219-2, while Herrs has already cracked the Top 10 at No. 9 with a top throw of 174-0 early on. Herrs is sure to battle teammate Avione Allgood for the women’s javelin title on Saturday as Allgood is the NCAA’s No. 6-ranked performer this season with a best of 182-8. The Sooners also feature the nation’s No. 7-ranked pole vaulter in 2016 with Mackenzie Shell clearing the bar at 14-1 ¼ early in her freshman season.

Alabama Crimson Tide
USTFCCCA Ranking: 27
2016 NCAA Indoor Finish: T17
2015 NCAA Outdoor Finish: T20
Team Capsule: Quanesha Burks’ resume as the NCAA’s leading long jumper speaks for itself. The Alabama junior has quickly become the top talent in the collegiate ranks during her time in Tuscaloosa as she was the NCAA Outdoor Champion in 2015 and NCAA Indoor Champion in 2016 in the event. Fans are in for a treat Saturday at the Battle on the Bayou meet as they will watch Burks open her outdoor season in the long jump as the clear favorite to walk away with the title. After winning last year’s NCAA Outdoor title with a wind-aided jump of 22-8, Burks followed by jumping a wind-legal personal best of 22-9 while competing for the United States at the NACAC Championships in Costa Rica. She jumped 22-3 ¾ in her last competition at the NCAA Indoor Championships in Birmingham while being crowned a national champion for the second time in her collegiate career. While Burks will lead the way for the Crimson Tide throughout the 2016 outdoor season, she will be joined by the likes of Diamond Gause in the 100 meters and 200 meters, Alex Gholston in the 400 meters, Katelyn Greenleaf in the 1,500 meters, Lakan Taylor in the pole vault and Haley Teel in the shot put and discus throw at the Battle on the Bayou on Saturday.

Ohio State Buckeyes
USTFCCCA Ranking: 28
2016 NCAA Indoor Finish: DNS
2015 NCAA Outdoor Finish: DNS
Team Capsule: If Oklahoma’s Roberson lines up as the favorite to win the women’s 400 meters at the Battle on the Bayou, Ohio State’s Sonikqua Walker is not far behind as a top-10 performer nationally in the early stages of the 2016 season. Walker looks to lower her seasonal best of 52.47 from her season opener at the Power Conference Cardinal & Gold two weeks ago, and she is certainly poised to do so with a personal best of 51.53 set during her junior season a year ago. The Buckeye women feature a deep sprints and hurdles squad as Walker will be joined on the track by the likes of Aisha Cavin in both the 100 and 200 meters and Alexis Franklin in both the 100 and 400 hurdles during Saturday’s competition. They will look to find their form from a year ago when Cavin clocked a personal best of 22.86 in the 200 meters and Franklin posted times of 13.39 in the 100 hurdles and an impressive 56.78 in the 400 hurdles as one of the leading dual hurdlers returning to the NCAA Division I ranks for the 2016 season.

Purdue Boilermakers
USTFCCCA Ranking: 34
2016 NCAA Indoor Finish: T33
2015 NCAA Outdoor Finish: T20
Team Capsule: LSU and Purdue are sure to go head-to-head in a number of events on the track during Saturday’s meet as the Boilermakers bring a talented stable of sprinters and hurdlers to Baton Rouge this weekend. While the Lady Tigers feature the NCAA’s second-fastest 4×100-meter relay team this season with a best of 43.25, Purdue follows closely behind in the No. 9 spot with a top time of 43.66 that was also run at the Texas Relays a week ago. Incidentally, Purdue’s 4×100-meter relay team followed one spot behind LSU in last year’s NCAA final with a sixth-place finish nationally in 2015. The Boilermakers, who also earned All-America honors in the 4×400-meter relay with a fourth-place finish nationally last season, arrive in Baton Rouge with the 15th-fastest squad in the early stages of the 2016 season with a best of 3:35.05. Symone Black will line up Saturday as one of the nation’s elite 400-meter hurdlers with a seasonal-best time of 57.36 to her credit to rank No. 6 among collegians for 2016.