Battle On The Bayou Men's Preview 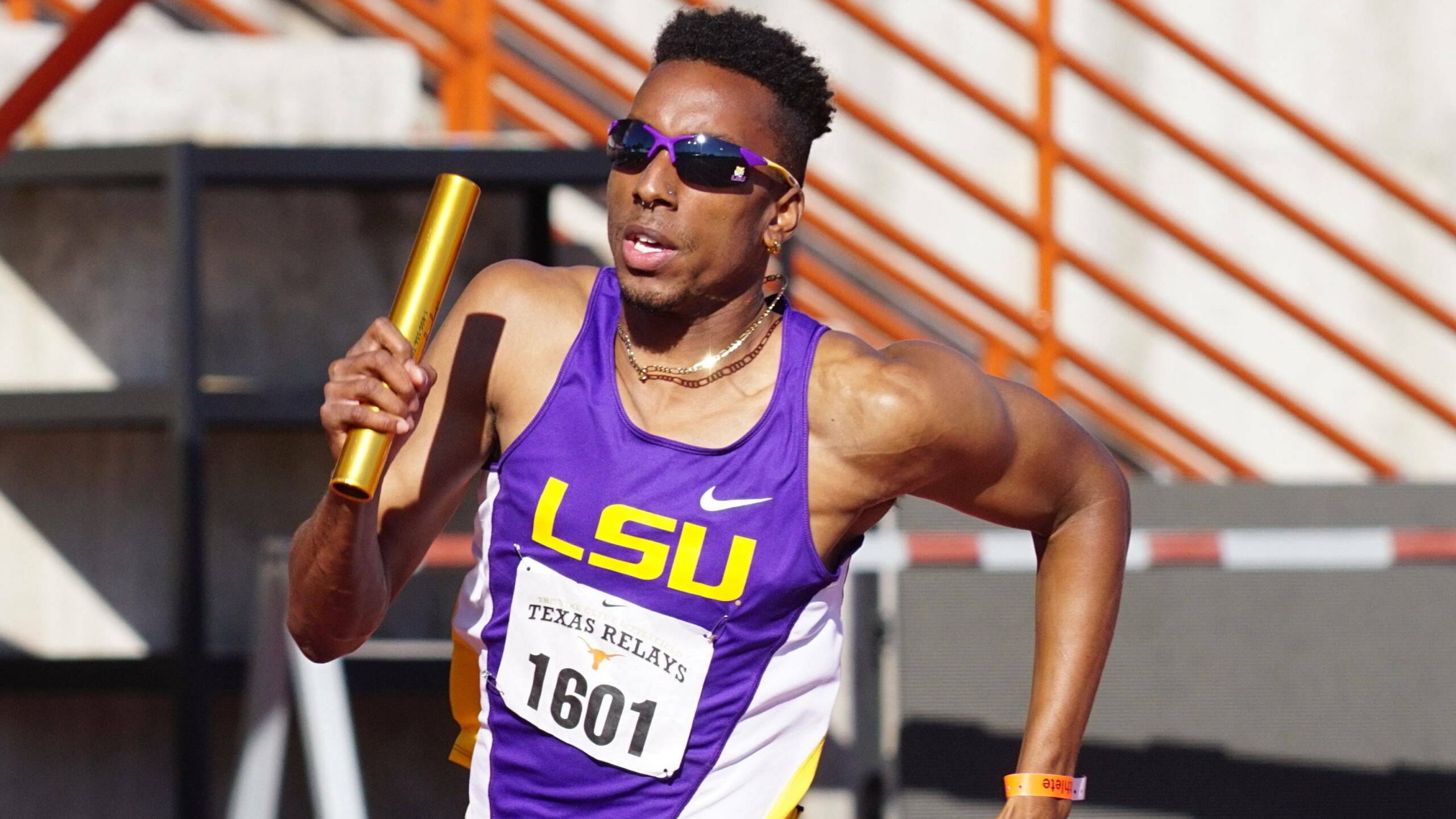 BATON ROUGE – Saturday’s sixth-annual Battle on the Bayou will match conference against conference as many of the nation’s premier programs from the Southeastern, Big 12 and Big Ten conferences square off at the Bernie Moore Track Stadium in one of the signature events of the collegiate calendar this weekend.

Saturday’s afternoon session will get underway at Noon CT following a brief opening ceremony while the action continues through the running of the 4×400-meter relays at 4:05 p.m. Action gets underway for the sixth Battle on the Bayou with the morning session at 9 a.m. at the Bernie Moore Track stadium.

Today we preview the men’s teams competing at the sixth-annual Battle on the Bayou, listed in order of their position in the latest national power rankings released Tuesday by the U.S. Track & Field and Cross Country Coaches Association. Check back Friday for a full preview of the seven women’s teams representing the SEC, Big 12 and Big Ten conferences this weekend.

LSU Tigers
USTFCCCA Ranking: 5
2016 NCAA Indoor Finish: 4
2015 NCAA Outdoor Finish: 4
Team Capsule: LSU’s relay teams have set the pace in the early stages of the outdoor season with the Tigers ranking No. 1 nationally in the 4×400-meter relay with a time of 3 minutes, 1.83 seconds in winning their race at the Texas Relays last weekend and No. 5 nationally in the 4×100-meter relay with a time of 39.33 seconds set in their season opener at Miami’s Hurricane Twilight. With a team of junior LaMar Bruton, senior Fitzroy Dunkley, senior Cyril Grayson and junior Michael Cherry, the reigning NCAA Indoor and NCAA Outdoor 4×400-meter champions ran their fastest time in the history of the Texas Relays on Saturday to emerge as the early-season favorite for the NCAA title yet again in the event with their fastest time ever run on the track at Mike A. Myers Stadium. Cherry, Dunkley and Bruton will each line up in the 200 meters individually, while Grayson will run his season-opening race in the 400 meters at the Battle on the Bayou on Saturday. The Tigers also feature one of the nation’s leading 4×100-meter relay teams again this season after winning the NCAA Outdoor bronze medal in the event a year ago. Junior Jordan Moore, freshman Jaron Flournoy, junior Tinashe Mutanga and junior Nethaneel Mitchell-Blake teamed to run a season-opening 39.33 at Miami that still has the team among the NCAA’s Top 5 through the first three weeks of the 2016 season. Mitchell-Blake, the NCAA Indoor Silver Medalist in the 200 meters, will join Grayson in running the 400 meters this weekend. Mutanga makes his season debut in the 100 meters after opening his season at Miami with the NCAA’s No. 2-ranked time in the 200 meters at 20.52 for a new personal best in the event. Moore is also on the heat sheet in the men’s 110-meter hurdles with a No. 8 national ranking to his name after running a season-opening 13.68 in Miami two weeks ago. Headlining the field events for the Tigers will be junior Johnnie Jackson in the hammer throw after he threw a season-opening PR of 217 feet, 1 inch in a third-place finish at Texas. Jackson enters the weekend as the No. 15-ranked hammer thrower in the country among collegians.

Alabama Crimson Tide
USTFCCCA Ranking: 8
2016 NCAA Indoor Finish: T64
2015 NCAA Outdoor Finish: T31
Team Capsule: Speaking of the throws, the foundation of Alabama’s early-season success lies in the throwing event as the Crimson Tide bring four throwers to Baton Rouge who currently rank among the Top 10 nationally in their respective events. Led by former NCAA Champion Hayden Reed, the Crimson Tide are sure to strengthen the SEC’s cause at the Battle on the Bayou in such events as the discus and hammer throws. Reed, the NCAA’s discus champion as a freshman in 2014, is ranked fourth nationally early in the season with a top throw of 199-7 to his credit. In fact, three Crimson Tide athletes rank among the NCAA’s Top 10 in the event through three weeks of the season as Reed is followed by teammates Joe Williams at No. 7 with a mark of 198-2 and Kord Ferguson at No. 8 with a mark of 197-3. Also among the nation’s Top 10 this week is Elias Hakansson, who owns the No. 10-ranked mark among collegians of 223-6 in the hammer throw. The Crimson Tide are also sure to make their presence felt on the track with All-American Ahmed Ali setting the pace in the 100-meter dash and as a leg on Alabama’s 4×100-meter relay team that was an NCAA finalist a year ago. Ali is fresh off a dominating victory in the 200 meters at the Florida Relays last weekend where he crushed Mutanga’s previous NCAA-leading time with a wind-legal collegiate best of 20.16 just last Saturday. Other All-American hopefuls competing for the Tide on Saturday will be sprinter Tadashi Pinder in the 200 meters and Jeremiah Green in the triple jump. Green was an NCAA Outdoor finalist in the event a year ago while earning All-America honors with a sixth-place finish nationally.

Ohio State Buckeyes
USTFCCCA Ranking: 15
2016 NCAA Indoor Finish: T24
2015 NCAA Outdoor Finish: T37
Team Capsule: Ohio State featured one of the NCAA’s elite 4×400-meter relay teams a season ago and the Buckeyes will look to contend for All-America honors once again after finishing fourth in the event at the 2015 NCAA Division I Outdoor Track & Field Championships at Oregon. Led by the likes of standout sprinter Nick Gray, the Buckeyes were recent qualifiers at the NCAA Indoor Championships this season where they claimed an 11th-place finish nationally before heading outdoors. Gray is the NCAA’s No. 7-ranked 400-meter sprinter with a 46.16 seasonal best early in the 2016 season, but is scheduled to line up in the 200 meters at the Battle on the Bayou on Saturday afternoon. The Buckeyes also feature All-American shot putter JC Murasky in the competition this weekend. Murasky was an NCAA finalist in the shot put during the 2015 season, earning All-America honors with a seventh-place finish at the national meet at Oregon.

Mississippi State Bulldogs
USTFCCCA Ranking: 24
2016 NCAA Indoor Finish: T51
2015 NCAA Outdoor Finish: 8
Team Capsule: The power and speed of the SEC will be on display throughout this year’s Battle on the Bayou, and the Mississippi State Bulldogs are sure to factor into the scoring with a well-rounded team led by many of the nation’s top-ranked performers in the sprints, relays and throws. Like the Tigers, the Bulldogs line up this weekend with two of the top-10 times nationally in both the 4×100-meter and 4×400-meter relays as All-America contenders in both events. They sprinted to the NCAA’s No. 7-ranked time in the 4×100 relay of 39.60 at the Florida State Relays two weeks ago before returning to the state of Florida a week ago and clocking the No. 6-ranked time in the 4×400 relay at 3:04.99 at the Florida Relays last Saturday afternoon. All-American quartermiler Alfred Larry has provided a spark in the latter as he lines up as a favorite to win the 400-meter title on Saturday as the nation’s No. 4-ranked performer in the event with a seasonal-best time of 45.94 to his credit. Curtis Thompson ended his freshman season at the NCAA Championships a year ago with a bronze-medal-winning third-place finish in the javelin final where he threw 247-5 to score six points for his team. Thompson is an NCAA-title favorite once again while already raising that mark with a seasonal best mark of 265-10 at the Florida State Relays to rank No. 2 nationally behind only the NCAA-leading throw of 268-7 by Texas A&M’s Ioannis Kyriazis.

Kansas State Wildcats
USTFCCCA Ranking: 27
2016 NCAA Indoor Finish: 40
2015 NCAA Outdoor Finish: DNS
Team Capsule: Kansas State is recognized year in and year out as having one of the leading jumps programs in collegiate track and field, and two Wildcat stars will be on display at the Battle on the Bayou on Saturday as senior Ifeanyichukwu Otuonye competes in the long jump and sophomore NaTron Gipson takes flight in the high jump while headlining the field events. Otuonye is one of the NCAA’s top long jumpers returning from a season ago when he set a seasonal-best of 26-2 ¾. Gipson also ranked among the national leaders in his event as a freshman when he cleared a seasonal-best height of 7-3 ¾ in his first taste of top-flight competition. The Wildcats also make the trip to Baton Rouge with one of the top sprinters returning to the NCAA Division I ranks in 2016 as sophomore Terrell Smith is scheduled to line up in both the 100-meter and 200-meter dashes on Saturday afternoon. Smith ended his freshman season in 2015 with bests of 10.30w in the 100 meters and 20.51 in the 200 meters to rank among the nation’s best in both events.

Purdue Boilermakers
USTFCCCA Ranking: 37
2016 NCAA Indoor Finish: 13
2015 NCAA Outdoor Finish: T44
Team Capsule: In Chukwuebuka Enekwechi, the Purdue Boilermakers boast an All-American contender in both the shot put and hammer throw as he will be a catalyst in his team’s success in 2016. An All-American as a junior a year ago, Enekwechi placed sixth in the hammer throw final at the 2015 NCAA Division I Outdoor Track & Field Championships while ending the season with a top throw of 238-9. Enekwechi has already nearly equaled his shot put seasonal best of 63-10 ¼ from last season with a top throw of 63-6 this spring to rank No. 5 on the national list heading into the weekend. Other Boilermakers making the trip to Baton Rouge and sure to factor into the team scoring will be Obokhare Ikpefan in the 400-meter hurdles and Caleb Fricke in the discus throw with seasonal-best marks of 50.81 and 194-8, respectively, a year ago.

Oklahoma Sooners
USTFCCCA Ranking: 41
2016 NCAA Indoor Finish: DNS
2015 NCAA Outdoor Finish: T44
Team Capsule: Tyler Renton is sure to battle Mississippi State’s Curtis Thompson for the men’s javelin title during Saturday’s meet as the Sooner standout follows closely behind in the No. 4 spot of the national ranking this spring with a seasonal-best mark of 252-2 to his credit. Senior Garrett Snow has also returned as one of the nation’s leading javelin throwers from last season when he set a best of 241-6 at the Big 12 Championship meet. Their entry is sure to make the men’s javelin one of the highlight events of Saturday’s battle. Oklahoma’s strength in the throws is not limited to the javelin as senior Chase Sammons follows closely behind the likes of Ohio State’s Murasky and Purdue’s Enekwechi as an All-American contender in the event. Sammons enters the weekend with a personal best of 63-8 ¼ he set during his junior season. Sammons has also set his personal best of 186-10 in the discus while competing at the UT-Arlington Bobby Lane Invitational to rank No. 17 among collegians.