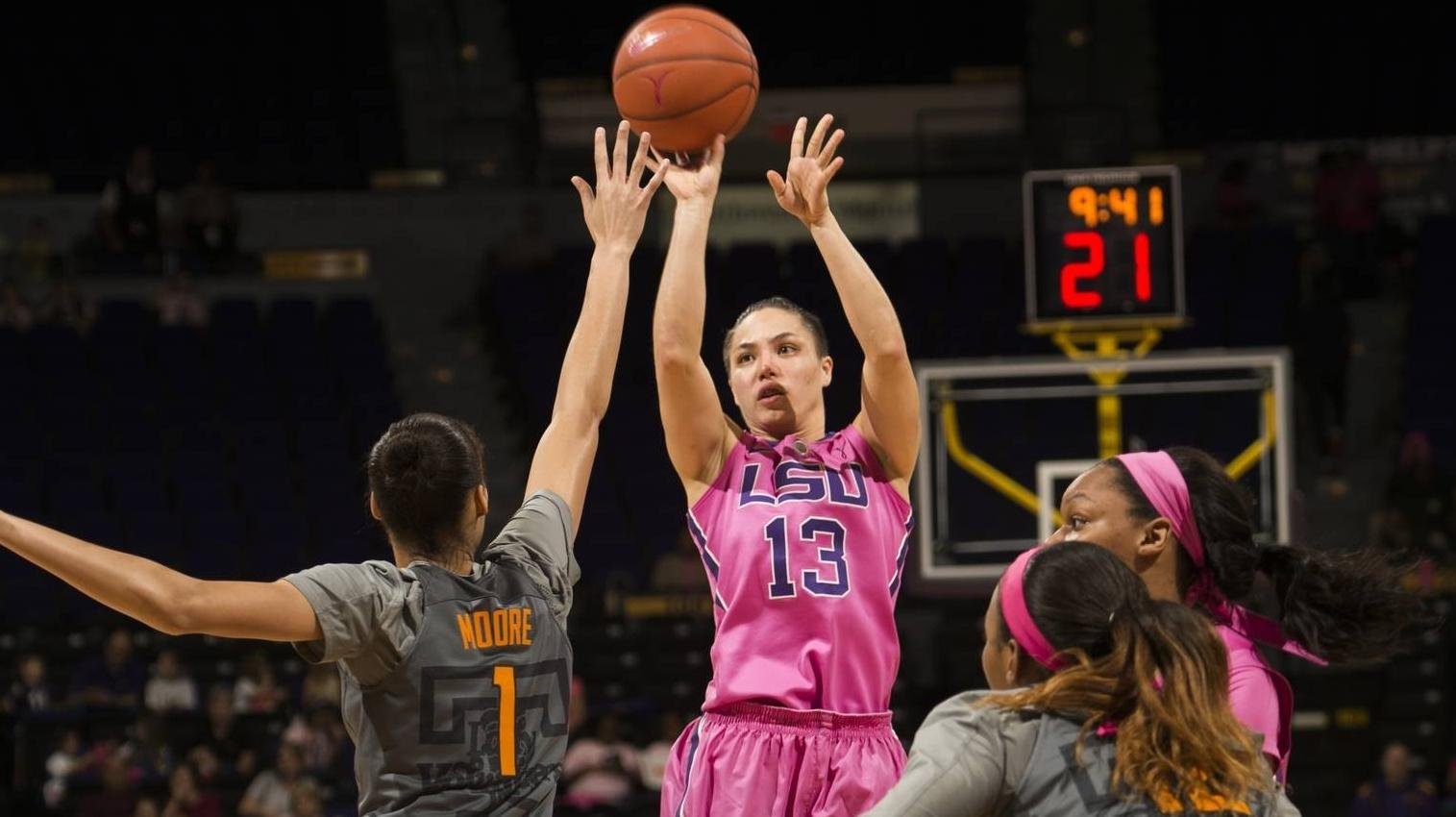 Seniors Akilah Bethel, Anne Pedersen and Ann Jones were interviewed on stage by host Tony King, reflecting on their time representing LSU and talking about what the future holds for them in the next stage of their lives. They also answered several lighthearted questions that kept the evening entertaining for all those in attendance. Following the awards presentation, a video highlight package and a senior tribute video were shown.

Carole Walker, who serves as senior associate director of the Cox Communications Academic Center for Student-Athletes, presented Pedersen with the Scholar-Athlete of the Year award for her work in the classroom. Pedersen earned her bachelor’s degree in sports administration in May 2015. She is working on her master’s degree in sports pedagogy, and is on schedule to obtain her second degree from LSU this summer.

Junior Rina Hill racked up the honors Wednesday evening, earning recognition as the team’s Most Valuable Player and Defensive Player of the Year. Hill was the only Lady Tiger to start all 31 games and she was LSU’s second-leading scorer during SEC action, averaging 9.4 points per game in those 16 contests. She scored in double figures in 15 games, and recorded a steal in 11 of the final 16 games of the season. She scored a career-high 17 points against 18th-ranked Kentucky, and dished out a career-best six assists in the win over No. 24 Tennessee. For the year, she averaged 8.4 points and 2.4 rebounds while also totaling 66 assists and 29 steals. In addition to the team honors, she was also presented the L Club Team Captain Award by National L Club President Eric Reid.

Junior transfer Alexis Hyder earned Offensive Player of the Year recognition after leading the Lady Tigers with 12.2 points per game. She was the only Lady Tiger to score 20 or more points this year, doing so three times, including both games of the SEC Tournament. She scored a career-best 23 points versus both #22 Missouri and #13 Kentucky. Hyder, who transferred to LSU from North Texas, posted a team-leading 10 double-doubles, seven of which were against SEC foes. She was an honorable mention pick to the Associated Press’ All-SEC Team after leading the Lady Tigers in scoring 13 times, and on the boards 18 times.

True freshman Shanice Norton was selected as the Newcomer of the Year. A native of London, England, Norton started 22 of 31 games this season. She was the leading rebounder for the backcourt with 3.5 boards per game, while also averaging 5.4 points per game. She scored a season-high 15 points against Texas Southern, #11 Mississippi State and Georgia. The rookie scored in double figures six times, four of which were versus SEC foes, and grabbed five or more rebounds in 10 games.

The Sue Gunter Award was presented to associate athletic trainer Micki Collins for her tireless efforts displayed while tending to the numerous injuries and illnesses that plagued the team this season. Collins has served as the athletic trainer to the Lady Tigers for the last 14 seasons.

In addition to team honors, Fargas recognized several children from the TOT (Teams of Tomorrow) Basketball program with an Eye of the Tiger Award, which was based on several qualities, including hard work at practices, a positive attitude, good grades and a skills competition. TOT children perform at halftime of several Lady Tiger games each season.