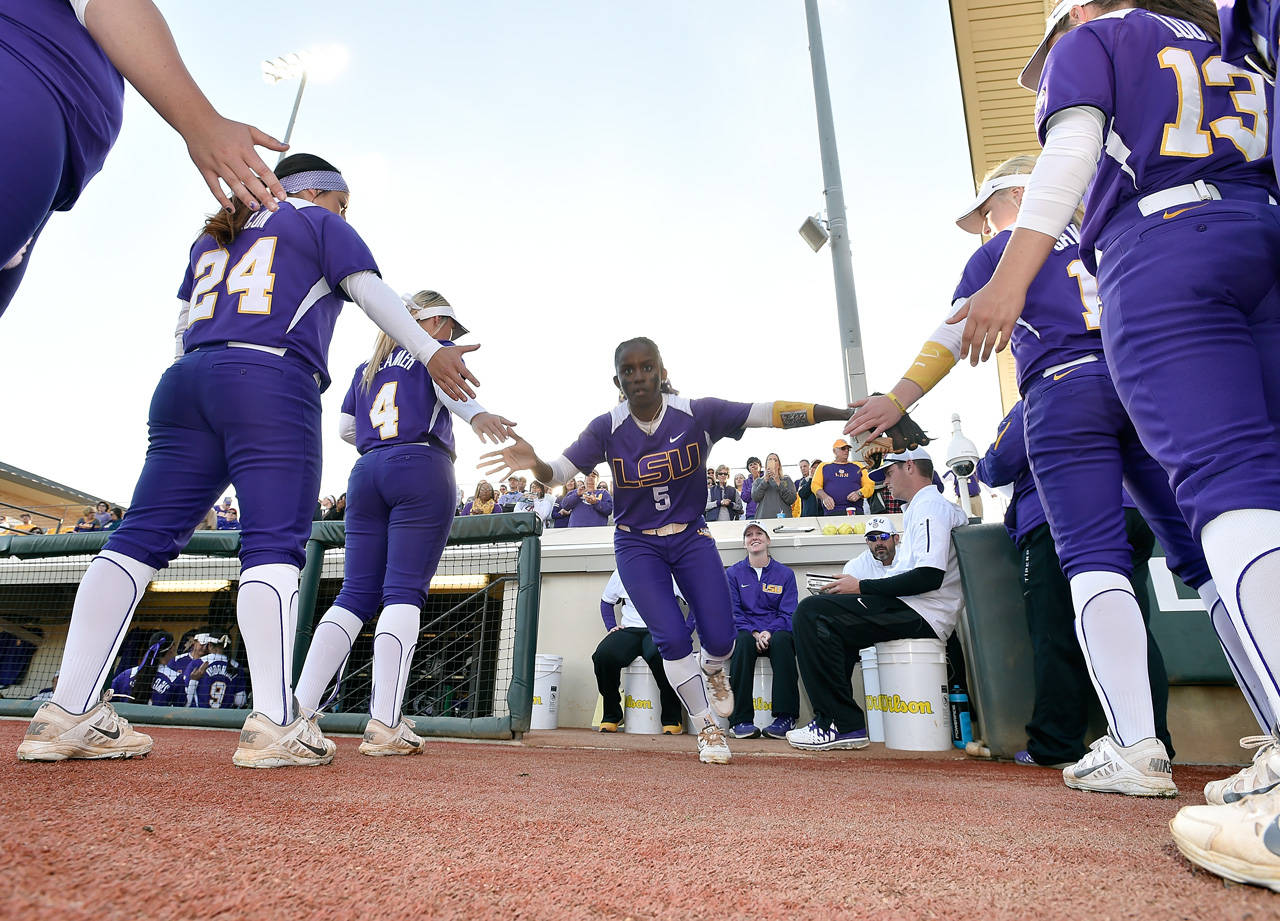 BATON ROUGE, La. – The No. 8 LSU softball team returns home to open a set of four home games this week, beginning Wednesday evening with a contest against the Southern Miss Golden Eagles at 6 p.m. at Tiger Park.

SEC Network+ will have coverage of the non-conference clash between the Tigers and Golden Eagles, with the stream available on WatchESPN and the WatchESPN app. Lyn Rollins and Yvette Girouard will be on the call for the game.

Patrick Wright will be on hand to call the game on the radio home for LSU softball on Talk 107.3 FM locally in Baton Rouge, with audio also provided in the Geaux Zone for subscribers at LSUsports.net.

To honor last year’s trip to the Women’s College World Series, the first 500 fans in attendance on Wednesday will receive a WCWS commemorative lapel pin. The contest will also serve at Teacher Appreciation Night, where all faculty and staff will be admitted to the game for free with an LSU ID.

LSU returns home with a head of steam after going on the road last weekend and taking two of three games from the Georgia Bulldogs in Athens. The series victory at Georgia was the first for an LSU team in 15 years there, as the Tigers improved to 28-9 on the season and 5-7 in Southeastern Conference play.

Georgia, who remains ranked at No. 10 this week, was the fourth of five Top 25 opponents LSU has to open league play, as the team so far within the SEC has the third most wins over ranked teams with seven.

The Tigers will take a brief respite from the gauntlet of SEC foes when they host Southern Miss on Wednesday, returning to midweek play after not having one last week in preparations for Georgia, allowing LSU continue to build on its solid play from the weekend.

“I think we’re still trying to climb out of this hole a little bit, but I think we’re on the way out of it and I feel really good about the spot that we’re in,” head coach Beth Torina said. “I feel better now than I have about where we are fundamentally, and having these days and games to continue to work and prepare will really help us.”

The wins the Tigers were able to earn last weekend came in nearly every facet, earning timely hits in a do-or-die situation in game one, while playing perfect defense and attacking the strong pitching staff of the Bulldogs early in game two. Although LSU couldn’t pull out the sweep, the team had chances to overtake Georgia late, exiting still with its second conference series victory of the year.

One of the players heating up for the Tigers is senior infielder Sandra Simmons, who leads LSU in hitting in conference play with a .394 average and 13 hits. The California native had four hits on the weekend which tied Constance Quinn for the team weekend high, while also belting one of the team’s three home runs over the weekend.

Quinn went 3-for-3 in the opener last Friday, while in game two she helped put the contest out of reach with a two-RBI hit to help ice the game and the series late.

Getting it done with her bat and her arm, sophomore Allie Walljasper had two hits in a handful of at-bats, while also getting a seven-inning complete-game win in game two to improve to 5-4 in the circle on the year. Her home run in the seventh of game one was the third of her career and first since February 19, 2015 against Cal State Fullerton, as she has had a hit in the last three games she’s batted in.

Bianka Bell leads the team overall on the season in batting average at .367 and RBIs with 41, just one hit behind Sahvanna Jaquish for the team lead and two home runs behind Jaquish and Kellsi Kloss who have nine each to lead the squad. Kloss hit her ninth of the year on Saturday and is third in RBIs with 35.

Pitcher Carley Hoover won her 11th game of the year last weekend, as after Georgia scored all four of their runs in the first few innings, pitched a shutout the rest of the way allowing LSU to make its furious comeback late. Sydney Smith started on Sunday, and although she suffered the loss she still sports a sub-1.00 earned run average and a 7-2 overall record.

Southern Miss comes into the matchup with an 18-20 overall record and a 5-7 mark within Conference USA. The Golden Eagles did pick up a series victory over Western Kentucky in Hattiesburg, winning 3-2 in nine innings in the opener and 5-4 in 10 innings on Sunday.

The game will be a special one of sorts for two Tigers, first with assistant coach Howard Dobson who was the head coach at Southern Miss for four years before coming to LSU, while junior Quinn prepped at Oak Grove High School and is a Hattiesburg native.

This is the first meeting against Southern Miss since the 2011 season, a game in which the Tigers won 2-0 in Baton Rouge. In the last 10 meetings, LSU has won nine of the matchups.