Quarterbacks Show Off in Football Scrimmage 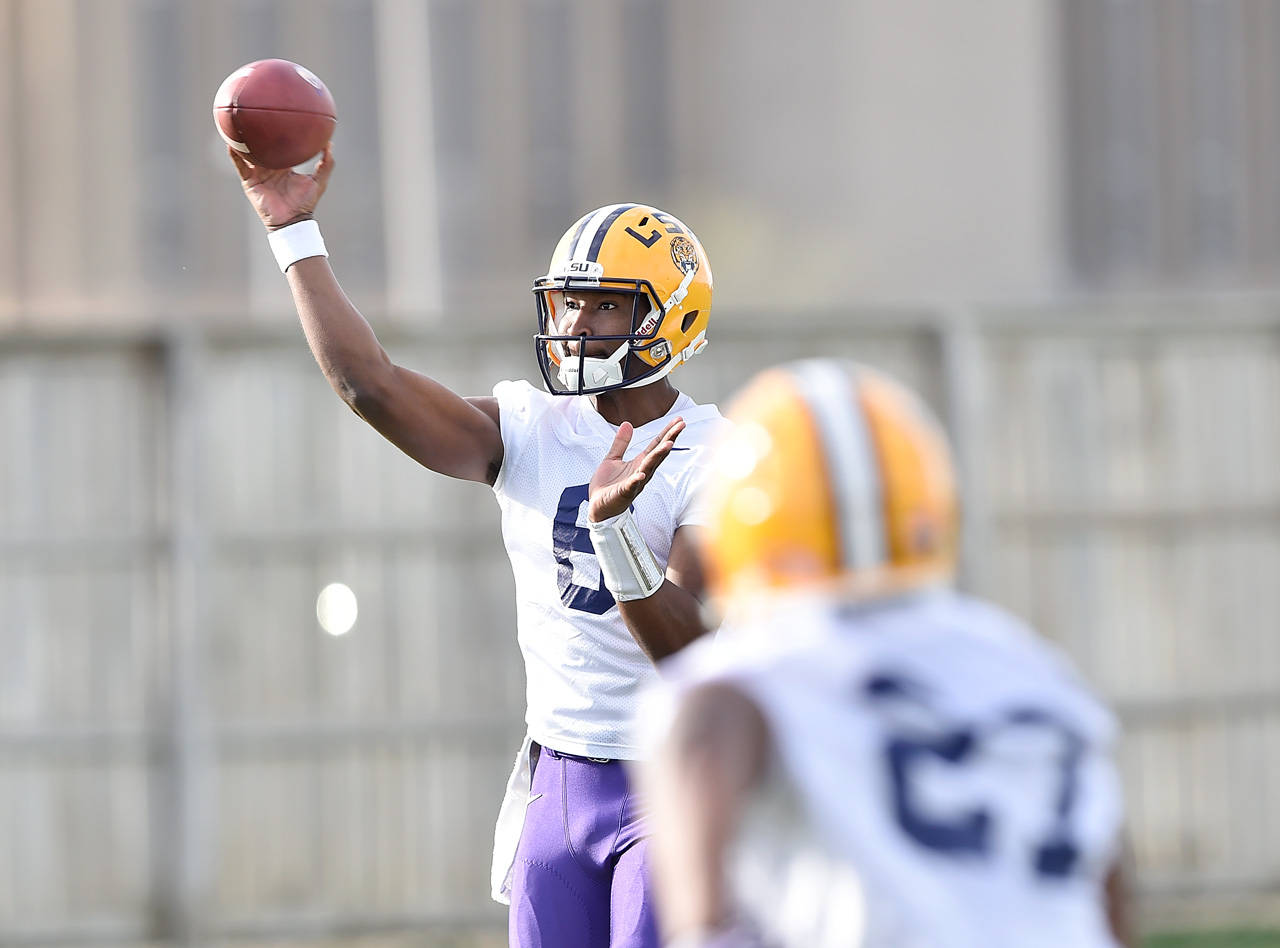 BATON ROUGE – Quarterback Brandon Harris connected on 16-of-20 passes for 246 yards to lead a trio of LSU signal callers that combined to complete 41-of-52 attempts as the Tigers held their first full-scale scrimmage of the spring here Saturday in Tiger Stadium.

Saturday’s scrimmage wrapped up the third week of spring practice for the Tigers. LSU concludes spring football with the annual National L Club Spring Game on Saturday, April 16 in Tiger Stadium. Kickoff for the spring game is set for 3 p.m. and admission will be free of charge.

“Today was really the first full scrimmage that we have had,” coach Les Miles said. “Before we left (for spring break) we had a partial scrimmage. Today, we had about 100 plus snaps and I felt like we were sharp at the quarterback position.

“We threw the ball very effectively. We had our quarterbacks live, they scrambled and made plays. It was a productive day for us.”

Junior transfer Danny Etling completed 14-of-18 passes for 220 yards, while redshirt freshman Justin McMillan connected on 11-of-14 attempts for 226 yards. Miles said that both Harris and Etling took snaps with the No. 1 offense and that LSU’s No. 2 offensive unit threw the ball on just about every down.

Miles said that he’s seen the quarterback position improve with each practice this spring and attributed it to all three players going to the field with more confidence.

One key component to LSU’s offense was limited by design during Saturday’s scrimmage as Heisman Trophy candidate Leonard Fournette carried the ball just a couple times. Miles said that he wanted to use the scrimmage to give sophomore Derrius Guice more carries and it worked as Guice led all rushers with 73 yards on 14 carries. Darrell Williams added 54 yards on 12 attempts.

“He is a talented back and a guy who can catch the ball in the back field as well as run it,” Miles said of Guice. “We wanted to limit Leonard’s reps so that gave Derrius an opportunity to make some plays.”

Junior receiver Malachi Dupre led all receivers with six catches for 80 yards, while D.J. Chark caught five passes for 146 yards, including a 47-yard catch and run play. Guice caught a 35-yard TD pass and tight end Jacory Washington had a 40-yard TD reception. Miles also noted that redshirt freshman Derrick Dillon scored a 50-yard TD and that sophomore Russell Gage, who played in the secondary his first two years with the Tigers, continues to turn heads at wide receiver.

“Defensively, I think we are in position and there are some real positives on that side of the ball,” Miles said. “We have a lot of guys making plays and getting to the football. This film will give us a great opportunity to teach, study and improve.”

On White, who graduated early and joined the Tigers in January, Miles said, “he’s going to be a very talented linebacker. He needs to work on his tackling but he’s a guy who will be an every down linebacker for us very quickly. He has a natural instinct and he’s a special player.”

“Brett Favre did a spectacular job,” Miles said. “I can’t tell you the number of high school coaches who grabbed me and talked about (his) speech. It’s a really interesting thing. A guy who has accomplished as much as he has really just wanted to play. He enjoyed the reality of the competition, being around the guys and just playing the game. I really enjoyed him. I am glad he was a part of it. I think he made the clinic better.

“Marcus Spears did a great job. He told those coaches if you want to have a great career, invest in your players. Love them. I think the week has just been spectacular and we appreciate what Marcus and Brett contributed to our clinic.”
Miles said that the Tigers turned the ball over just one time during the scrimmage, that coming on a batted ball, and that there were no injuries during the workout.

“It’s always good thing we you can come out of a competitive scrimmage without an injuries,” Miles said. “We got better today, and really improved all week for that matter.”

The Tigers will return to practice on Tuesday afternoon and will then wrap-up their fourth week of spring practice with another scrimmage in Tiger Stadium.