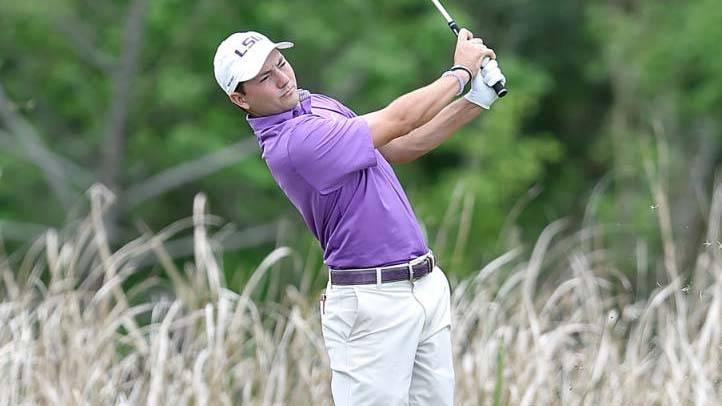 BATON ROUGE – LSU’s senior All-American Zach Wright cashed in on his victory at the Valspar Collegiate Invitational a week ago and performance at the Tiger Classic on Tuesday afternoon with a selection as the SEC Men’s Golfer of the Week on Wednesday as he continues to join the conversation as a Ben Hogan Award candidate.

Wright has been crowned a tournament champion in three of his four starts this spring after opening 2016 with a win at The Prestige at PGA West in February with a career-low 12-under par 201 for 54 holes.

Wright scored his second tournament title this season when he defeated Texas A&M’s Chandler Phillips in a one-hole, sudden-death playoff at the Valspar Collegiate Invitational on March 24 after tying his Aggie rival with matching 54-hole scores of 2-under par 211 for the championship. Wright made par on the first playoff hole at Floridian National Golf Club’s par-four 18th hole to take the title.

The senior from Phoenix, Arizona, fired rounds of 2-under 69 and 1-over 72 on Monday and 1-under 71 on Tuesday to top the charts in a loaded 15-team field that featured four top-10 and 10 top-25 teams in the latest Golfstat Top 25 power rankings. Among the 83 players in the field were three top-10, eight top-25 and 16 top-50 players nationally in the Golfstat rankings, including its No. 1-ranked player in Texas’ Beau Hossler, No. 4-ranked player in Florida’s Sam Horsfield and No. 8-ranked player in Charlie Danielson of Illinois.

While teeing off at the Valspar Collegiate Invitational as Golfstat’s 18th-ranked player nationally, Wright vaulted himself onto the cusp of the Top 10 nationally as the 11th-ranked player in college golf after an update was made to the rankings following his win a week ago. He also ranks No. 11 in the latest Arnold Palmer Cup Ranking released nearly two weeks ago.

Wright’s victory at the Valspar Collegiate Invitational helped lead the Tigers take home a second-place team finish in the event with a 54-hole team score of 8-over par 860, including a 5-under par 279 in the final round. They climbed back into the Top 20 of the national rankings on the strength of their performance as the No. 18-ranked men’s team in college golf in the updated Golfstat power rankings.

He followed by tying for medalist honors at the one-day, 36-hole Tiger Classic on Tuesday as he posted an identical score of 1-under par 143 for the day to tie teammates Eric Ricard and Luis Gagne for first place overall. Their performance helped the Tigers finish 25 shots clear at the top of the six-team field in their tune-up for this weekend’s regular-season finale at the Aggie Invitational.

Wright is now a four-time tournament champion in his collegiate career at LSU as he won his first individual title as a freshman during the 2013 spring season at the Louisiana Classics event in Lafayette.

Despite LSU’s recent success as last season’s SEC and NCAA champions, Wright is the first Tiger to be named the SEC Men’s Golfer of the Week in four years since former standout Austin Gutgsell received the award in April 2012. Former All-SEC performer Andrew Presley was also recognized on March 8, 2012, as LSU’s last two winners of the award.