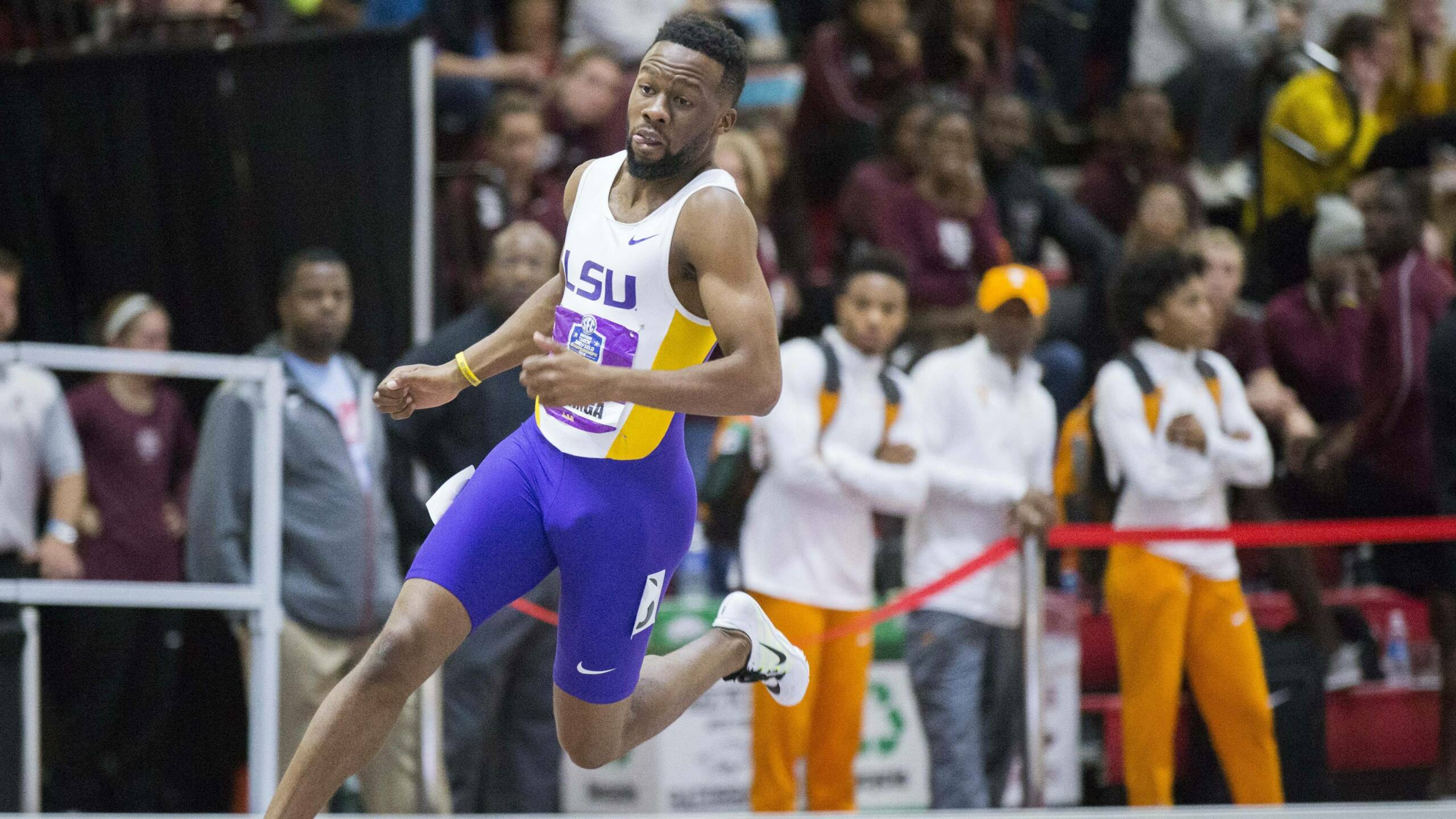 BATON ROUGE – LSU’s sprint squad was electric in its 2016 outdoor season opener at the Hurricane Twilight meet last Friday night, and junior Tinashe Mutanga and freshman Kortnei Johnson were both honored for their performance by the Southeastern Conference on Tuesday afternoon with SEC Athlete of the Week honors.

Mutanga became the third LSU Tiger to be named the SEC Men’s Runner of the Week in 2016 after winning the men’s 200-meter title at the University of Miami with an NCAA-leading personal best in his season debut last weekend. Johnson was selected the SEC Women’s Freshman of the Week with her performance in the 100 and 200 meters.

Mutanga made the most of his outdoor debut with the Tigers when he sprinted to a wind-legal PR of 20.52 seconds to win the men’s 200 meters with the fastest time among collegians through two weeks.

He came from behind and overtook freshman teammate Jaron Flournoy in the final 50 meters of the race to win his first collegiate title for the Tigers as his wind-legal PR of 20.52 (+0.5) was nearly one tenth of a second faster than any other collegian running the 200 meters last weekend. Flournoy followed in second place with a personal best of his own at 20.69 to rank No. 4 nationally in the event.

Mutanga’s season-opening 20.52 was not only the No. 1-ranked time in the NCAA following the weekend, but it also ranked the Zimbabwe international at No. 8 in the World rankings in the 2016 season. It smashed his previous wind-legal personal best by nearly a half second as he stepped into blocks Friday with a PR of 20.99 set back in 2011 in a meet in his native Africa.

Mutanga first stepped onto the track at Cobb Stadium for the 4×100-meter relay in the first event of the evening session at the Hurricane Twilight and teamed with junior Jordan Moore (first leg), Flournoy (second leg) and junior Nethaneel Mitchell-Blake (anchor leg) to win the event with a season-opening 39.33 for the No. 2-ranked time in the country.

A transfer from Oral Roberts, Mutanga joined Mitchell-Blake and junior Michael Cherry as an SEC Men’s Runner of the Week after they were selected on Jan. 26 and Feb. 2, respectively, in the indoor season.

Johnson enjoyed her collegiate debut outdoors when she won her first career title in the 100-meter dash and finished runner-up in the 200 meters dash with two of the fastest times nationally among collegians during the first two weeks of the 2016 outdoor season.

Johnson first stepped onto the track for the heats of the 100 meters as she edged junior All-American teammate Rushell Harvey (11.28w) at the finish line with a season-opening wind-aided time of 11.27 (+2.5) to rank No. 3 in the NCAA and No.  2 in the SEC under all conditions this season. She is also the second-fastest freshman nationally to run the 100 meters through two weeks of the outdoor season.

Johnson followed her victory in the 100 meters with a second-place finish in the 200 meters when she trailed Harvey (23.24) across the finish line with a new wind-legal personal best of 23.26 (+0.0) to finish just outside the Top 10 of the national rankings in the event. She is the No. 11-ranked collegian under all conditions, as well as the No. 5-ranked freshman nationally and No. 5-ranked sprinter in the SEC in the event.

Her season-opening run of 23.26 broke her previous wind-legal personal best in the event by nearly seven tenths of a second when she clocked a best of 23.94 during her senior season at Italy High School in 2015.