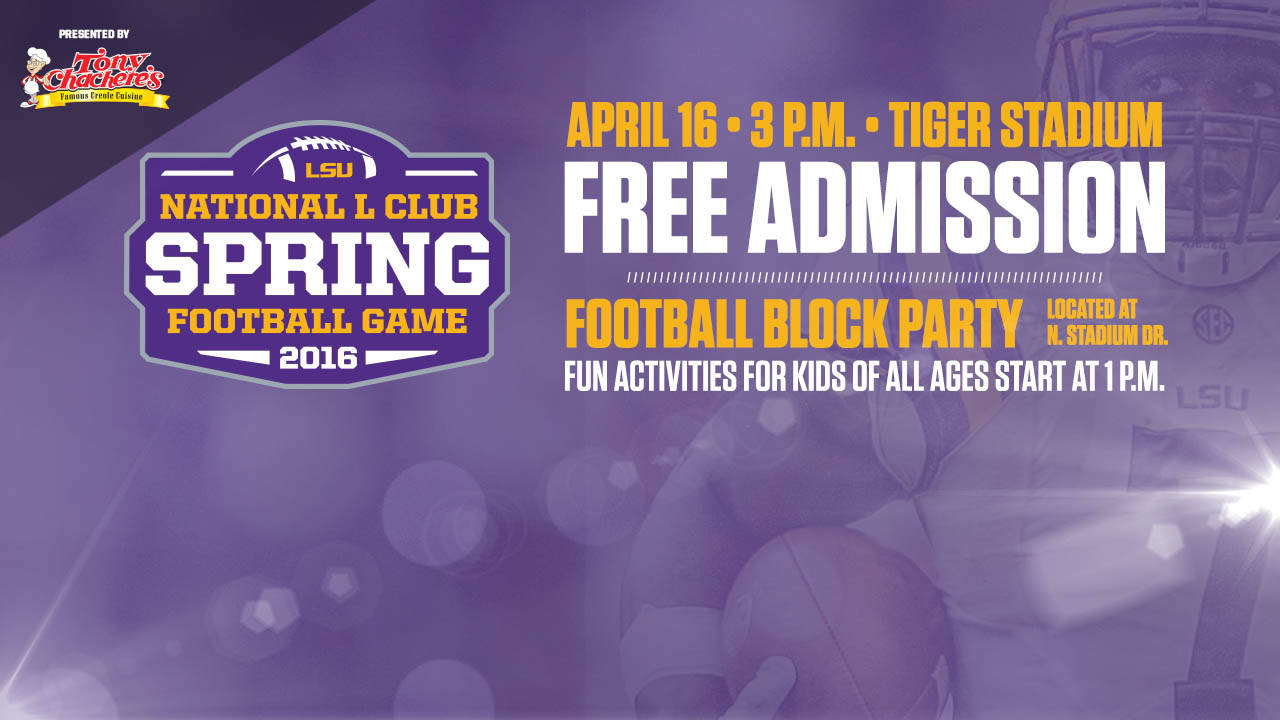 Admission to the spring game is free of charge.

Fans coming to campus for the game are reminded that LSU will host a block party on North Stadium Road between Tiger Stadium and the Maravich Center beginning at 1 p.m. The block party is free and will feature a live band – Rockin’ Dopsie Jr. and the Zydeco Twisters – who will play from 1:15 to 2:45 p.m. as well as carnival activities for the kids, a dunking booth, inflatables and all types of food.

How to Enter Tiger Stadium

Gates to Tiger Stadium open at 1:30 p.m. and fans are asked to enter the stadium on the west side thru gates 1-6. General admission seating will be in the west lower, south lower, and south middle (if necessary).

Fans are also reminded that the Tiger Stadium bag policy will be in effect and that prohibits backpacks or any bag or purse larger than 8 ½ x 11” from being brought into the stadium. The following is a list of other items that are prohibited from Tiger Stadium: 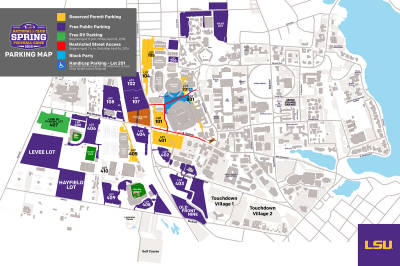 Lot 407 across from the vet school will be a free RV lot.

Unique Sale at the LSU SportShop

The sale will take place at the LSU SportShop location inside the west plaza of Tiger Stadium and will run from 1:30 p.m. until approximately 30 minutes following the conclusion of the spring game.

Some of the items that will be on sale that day include:

The main LSU SportShop, located next to Mike the Tiger’s Habitat, will be open on game day from 10 a.m. to 6:30 p.m. and will offer a variety of great Tiger merchandise, including the 2016 National L Club Spring Game “Game Day” t-shirt.

The SEC Network will televise LSU’s National L Club Spring Game on both its over-the-air network along with the WatchESPN app on desktop and mobile devices. Former LSU great Marcus Spears will be on hand to call the action for the SEC Network along with Chris Cotter and Baton Rouge native Kaylee Hartung. Watch Live.

The LSU Sports Radio Network broadcast will air around the world in the Geaux Zone and over-the-air on ESPN 104.5/104.9 in the Baton Rouge area. Gordy Rush and Doug Moreau will call the action from the booth. Listen Live

Spring Games Around the SEC

LSU is one of six SEC teams to have its spring game on April 16 as the Tigers join Kentucky, Mississippi State, Tennessee, Alabama, Georgia and Missouri as schools that close out spring practice that day.