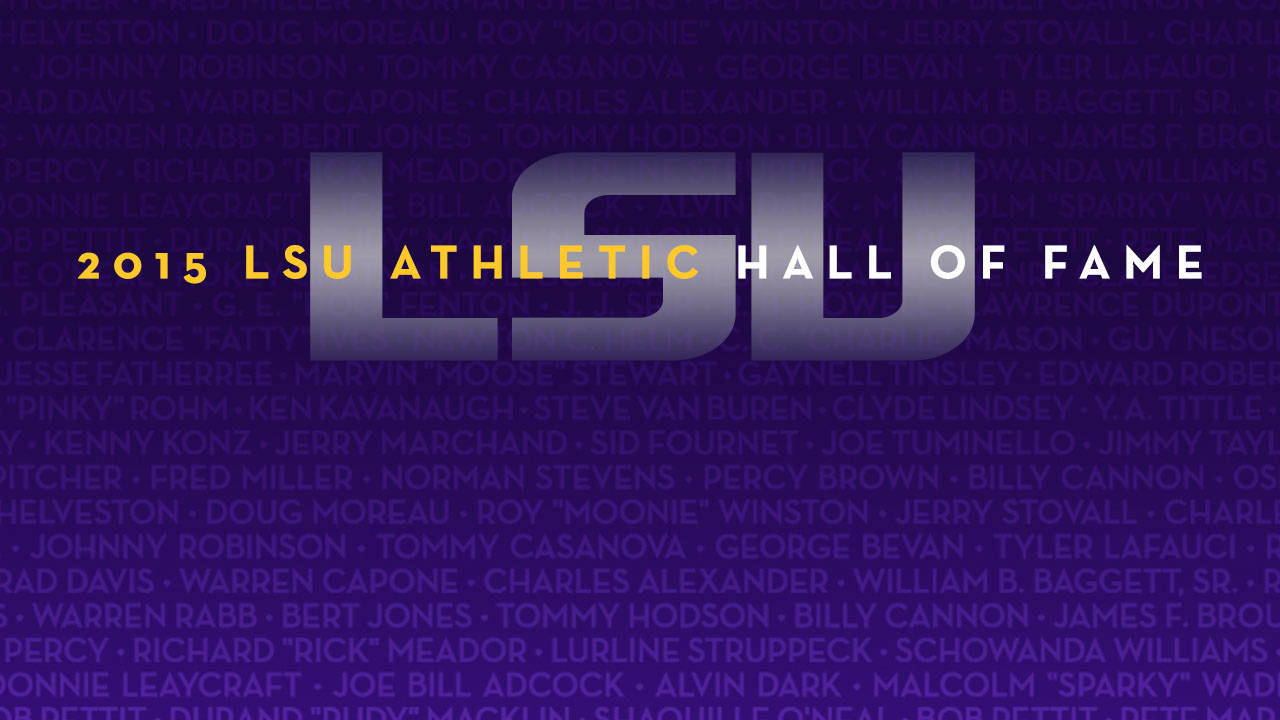 The event begins with a reception at 6 p.m., followed by dinner at 7 p.m. Tickets for the event are available for $50 each or $500 for a table of 10. Tickets may be purchased by contacting Courtney Albritton of the Tiger Athletic Foundation at (225) 578-0159 or calbritton@lsu.edu.

The inductees will also be recognized in Tiger Stadium on September 5 at LSU’s football season opener versus McNeese State.

“Congratulations to these eight outstanding individuals for being elected to the LSU Athletic Hall of Fame,” said Vice Chancellor and Director of Athletics Joe Alleva. “They embody the overall excellence that has distinguished LSU Athletics for generations. This is an exemplary group of men and women, and we are extremely proud to welcome them into the Hall of Fame.”

Burkholder, a native of Houston, was the 2006 NCAA National Champion on the balance beam. She earned a total of 14 All-America designations during her career covering all four events  — vault, uneven bars, balance beam and floor exercise – and the all-around.

Burkholder, who scored a perfect 10.0 on eight occasions during her career, was named the SEC Gymnast of the Year in 2004 and 2005, and the SEC Freshman of the Year in 2003. A 2006 LSU graduate, she won 25 all-around titles in four seasons of competition.

Also a three-time SEC Champion during her career, Carson graduated from LSU in 1998. She now works as a juvenile court officer, and among her accomplishments is the creation of a childhood obesity awareness program in the Des Moines public schools system.

Carson, who was inducted into the Iowa High School Athletic Hall of Fame in 2004, also worked as a mentor and coach for LSU All-American and U.S. Olympian Lolo Jones from 2006-09.

Eve, a product of Nassau, The Bahamas,  was the 1987 NCAA javelin champion and an All-American in the javelin and in the shot put. A 1990 LSU graduate, she helped lead the Lady Tiger track and field team to three NCAA national titles, including the first of 11 straight outdoor championships in 1987.

Eve, also the SEC javelin champion in 1987, represented The Bahamas in the Olympic Games on five occasions – Seoul 1988, Atlanta 1996, Sydney 2000, Athens 2004 and Beijing 2008. She was a gold medalist in the 2002 Commonwealth Games and a two-time silver medalist in the Pan American Games.

Fowles, a Miami native, was a two-time All-American center at LSU, and she led the Lady Tigers to four consecutive Final Four appearances from 2005 through 2008. She was the 2008 National Defensive Player of the Year and the SEC Player of the Year, and she earned All-SEC honors in each of her final three seasons.

Fowles, a 2009 LSU graduate, established school career records for rebounds (1,570), blocked shots (321), free throws made (494) and free throws attempted. She was the first-round draft choice of the WNBA’s Chicago Sky in 2008 and has since enjoyed a magnificent pro career, earning WNBA All-Star status on three occasions.

Fowles is a two-time Olympic gold medalist, helping lead Team USA to titles in 2008 at Beijing and in 2012 at London.

Torres was a four-time SEC individual champion, and he led the Tigers to the 1988 SEC men’s swimming and diving team title. Following his LSU career, he competed in the 1992 and 1996 Olympic Games for Puerto Rico, and he earned silver medals at the Pan American Games and at the World University Games. Torres earned his undergraduate degree in 2000 from Florida Atlantic University.

Prior to his college career at LSU, Van Buren served in the United States Army during World War II, and he was awarded the Combat Infantry Badge, two Bronze Stars and the Purple Heart.

Van Buren, a native of Honduras, played halfback for the LSU football squad from 1948-50, and he helped lead the Tigers to the 1950 Sugar Bowl versus Oklahoma. He served as the Tigers’ team captain in 1950, and he was the No. 1 draft choice of the Philadelphia Eagles in 1951. Van Buren was voted NFL All-Pro in 1952.

Chambers worked as the athletic trainer from 1934-38 at LSU, where he initiated the idea of housing a live Tiger as the university mascot. LSU’s first tiger was brought to Baton Rouge in 1936 and was named “Mike” in honor of Chambers.

Chambers, who was raised in Cairo, Ill., played college football at Illinois, where he blocked for the legendary Red Grange, and he enjoyed a distinguished athletic training career at several institutions, including LSU, Iowa State, Ohio State, Georgia Tech, UCLA and Major League Baseball’s Pittsburgh Pirates. Chambers is a member of the National Athletic Trainers Association Hall of Fame.

Lang was LSU’s first assistant athletic trainer, and he provided treatment for Fighting Tiger student-athletes from 1932-71. Lang worked with legendary LSU trainer Martin “Doc” Broussard, and he enjoyed an exemplary career that culminated with his induction into the Louisiana Athletic Trainers Hall of Fame.

Lang, an African-American who worked at LSU for decades prior to the Civil Rights Movement and the desegregation of the student population, was one of the most respected individuals within the athletic department.

Said former LSU athletic director Carl Maddox, “Herman Lang was loved by three generation of men who wore the Purple and Gold. No single man in the annals of LSU intercollegiate athletics is more genuinely admired by those whose lives he touched.”