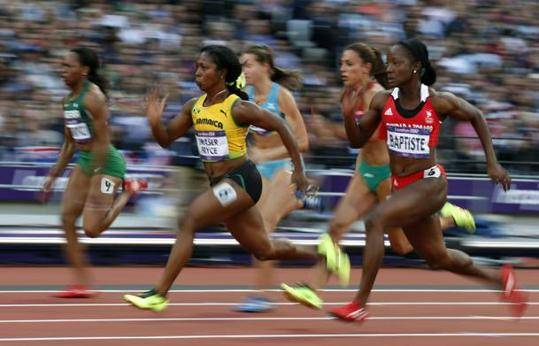 BATON ROUGE – Former Lady Tiger national champion Kelly-Ann Baptiste is sure to challenge for a spot on the medal podium at the IAAF World Championships in Athletics this summer after matching her own Trinidad & Tobago national record in winning the women’s 100-meter title at the Sagicor National Open Championships in Port-of-Spain on Saturday.

Baptiste, a former World Championships bronze medalist in the event, will challenge for top honors once again this summer after running the fifth-fastest time worldwide for 2015 with a winning 10.84 seconds in this weekend’s final at Hasely Crawford Stadium. She equaled her own Trinidad & Tobago national record set during the 2010 season in the championship final.

Baptiste blew away the field with a seasonal best of 10.84 (+1.4) to capture her seventh career 100-meter title at the Sagicor National Open Championships as she was followed across the finish line by Michelle-Lee Ahye (11.17) in second place and Reyare Thomas (11.22) in third place.

LSU’s 2008 NCAA 100-meter champion smashed her previous seasonal-best time in victory when she last ran a season-opening 10.98 (+0.2) at Florida’s Tom Jones Invitational in Gainesville on April 24.

With her victory, Baptiste will make her return to the international stage at the IAAF World Championships in Athletics for the fifth time in her career when she lines up in the 100-meter dash and 4×100-meter relay for Trinidad & Tobago in Beijing, China, as this year’s championship is set to run Aug. 22-30 at “The Bird’s Nest” National Stadium.

Baptiste was the World Championship bronze medalist in the 100 meters in Daegu, South Korea, in 2011, while she has also placed ninth in Berlin, Germany, in 2009 and 18th in her debut in Helsinki, Finland, in 2005.

She was not the only former LSU athlete to be crowned a 2015 national champion for Trinidad & Tobago during their recent Sagicor National Open Championships as former SEC Champion Jamaal James won the 800-meter title on Sunday afternoon with a time of 1 minute, 49.36 seconds in the final. James lined up as the top seed in the final after running the fastest time of the semifinal round on Saturday at 1:50.44.

James (1:49.36) edged Nicholas Landeau (1:49.41) at the finish line by just five one-hundredths of a second to win the event, while Kendis Bullard rounded out the medalists in third place with a time of 1:51.01.

Former Tiger All-American Kyron Blaise added a silver-medal-winning second-place finish in his specialty when he soared to a wind-aided jump of 53-3 (+3.0) in the final of the men’s triple jump. Blaise, who added a fifth-place finish in the men’s long jump final earlier in the weekend, followed 2015 champion Elton Walcott in the standings as his compatriot jumped a wind-aided best of 53-9 ¾ (+3.9) on his final attempt.

Another former LSU All-American lined up in Saturday’s final in the men’s 100-meter dash as Shermund Allsop sprinted to a ninth-place finish in the event with a time of 10.55 (-2.0) for third place in the first of two heats in the final. Keston Bledman was the runaway winner for the men’s 100-meter title as he clocked 9.86 (+1.1) at the line to beat Marcus Duncan (10.15) in the second heat.