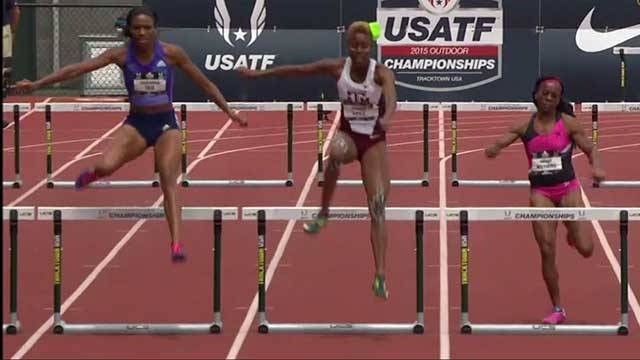 EUGENE, Ore. – Former Lady Tiger All-American and 2012 NCAA Champion Cassandra Tate enjoyed a weekend to remember while running at Oregon’s Hayward Field as she wrapped up this year’s USA Outdoor Track & Field Championships as the silver medalist in the women’s 400-meter hurdles after running a personal-best time of 54.01 seconds in Sunday’s final.

Already a gold medalist for the United States in the 4×400-meter relay at the World Indoor Championships during her athletics career, Tate earned her spot on Team USA going to the IAAF World Championships during the outdoor season for the first time as she will line up in the 400 hurdles in the meet running Aug. 22-30 in Beijing.

With the Top 3 finishers in the final board the plane to Eugene later this summer, Tate knew she would be in position after clocking a personal best of 54.51 for the fourth-fastest time in Saturday’s semifinal.

She dropped her lifetime best by a half second in Sunday’s championship finale after leading the race through 300 meters and following 2015 NCAA and U.S. Champion Shamier Little (53.83) across the finish line for the silver medal. Kori Carter grabbed the third spot on Team USA going to the World Championships in the event when she trailed Tate across the line in 54.41 for the bronze medal.

Team USA will be taking the two fastest 400-meter hurdlers in the World rankings to Beijing this summer as Tate’s 54.01 now ranks No. 2 on the IAAF performance list for the 2015 outdoor season after she already had the sixth-fastest time worldwide with her previous best of 54.51 from the semifinal round. Little returned to Hayward Field this weekend after running the World’s fastest time of 53.74 just two weeks ago in claiming a second-straight NCAA Championship in the event to finish off the collegiate season.

Tate is now part of the next generation of hurdle standouts representing the United States on the international stage as she has improved in each season since winning the NCAA title as a senior at LSU in 2012.

After being crowned the NCAA Champion in the 400 hurdles during the 2012 to cap her collegiate career, Tate earned back-to-back fifth-place finishes in her first two finals at the U.S. Olympic Track & Field Trials in 2012 and USA Outdoor Championships in 2013. She was then crowned the U.S. Outdoor Bronze Medalist while climbing onto the medal podium for the first time at the USA Championships last summer.

Muna Lee, a seven-time NCAA Champion and 19-time All-American during her collegiate career with the Lady Tigers from 2001-04, also lined up in the women’s 200-meter final during Sunday’s finale as she crossed the finish line in seventh place with a time of 22.60 (+0.4) while running out of lane No. 1. She advanced to the final with the sixth-fastest time of the semifinal round at 22.67 earlier in the day.

Two Tiger seniors also ran in semifinal races on Sunday afternoon to highlight their appearance at this year’s USA Outdoor Track & Field Championships as Aaron Ernest and Joshua Thompson both returned to the place where they wrapped up their LSU careers two weeks ago. Ernest crossed the finish line with a time of 20.68 (-1.3) to take seventh place in the first heat with the 12th-fastest time of the day in the 200-meter dash. Then Thompson stepped onto the track and clocked 13.75 (+0.7) for eighth place in the first heat and 15th place overall in the men’s 110-meter hurdles.

Two Lady Tiger freshmen also earned a place on Team USA going to the Pan American Junior Championships while competing at the USA Junior Championships being run simultaneously at Hayward Field as Aleia Hobbs won the silver medal in the 100 meters and Mikiah Brisco was named to the 4×100-meter relay pool as a finalist alongside Hobbs in the 100-meter dash on Friday afternoon.