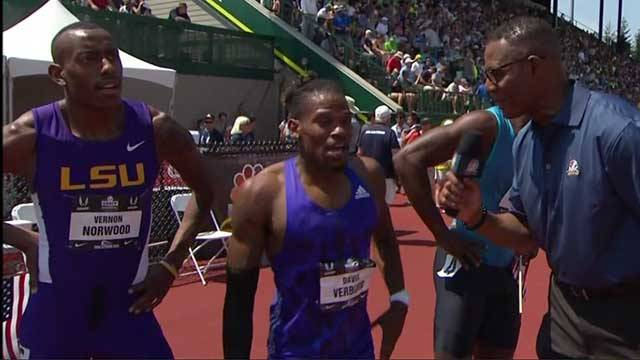 EUGENE, Ore. – Just two weeks after being crowned the NCAA’s 400-meter champion to cap his collegiate career, senior Vernon Norwood returned to the same Hayward Field track and punched his ticket to Beijing with Team USA with a bronze-medal-winning performance in the event to highlight Saturday’s action at the USA Outdoor Track & Field Championships.

One of his country’s rising stars in the men’s 400 meters, Norwood made sure his 2015 season would extend well into the summer as he will compete on the international stage for a second time.

Last summer, Norwood represented the United States at the North American, Central American & Caribbean Under-23 Championships in Kamploos, British Columbia, Canada, where he scored the bronze medal in the 400-meter dash along with a gold medal in the 4×400-meter relay. He will soon return to the international stage with his debut at the IAAF World Championships in Athletics that will be held later this summer from Aug. 22-30 at “The Bird’s Nest” National Stadium in Beijing, China, the site of the 2008 Olympic Games.

After matching his NCAA-title-winning time of 45.10 for second place in his semifinal heat on Friday afternoon, Norwood put together his third-fastest race of the season in the final as he crossed the finish line in 44.80, trailing only U.S. Champion David Verburg’s winning 44.63 and reigning World Champion LaShawn Merritt’s silver-medal-winning run of 44.66.

It quickly turned into a three-man race to the finish line on the backstretch as Norwood joined Verburg and Merritt in separating from the rest of the field at the 200-meter mark and racing around the final curve. Since Merritt had already secured a bye into the World Championships as the defending 400-meter champion, Bryshon Nellum also earned a spot on Team USA as the fourth-place finisher with his run of 45.18.

Norwood will step onto the plane for Beijing as a medal contender in his World Championships debut as he will not only line up in the 400-meter dash, but also join the likes of Merritt, Verburg and Nellum as part of his country’s 4×400-meter relay team that is sure to line up as a gold-medal favorite. The United States is the reigning World Champion in the men’s 4×400-meter relay.

LSU’s sprint star is the sixth-fastest 400-meter sprinter worldwide for the 2015 outdoor season as his seasonal-best and personal-best time of 44.44 will certainly position him for a spot in the final in Beijing.

Saturday’s performance continues a historic season for the Bowerman Award semifinalist after Norwood became the 14th sprinter in collegiate history to sweep NCAA Indoor and NCAA Outdoor titles in the 400 meters while also anchoring the Tigers to their fourth national championship in the 4×400-meter relay in school history.

Norwood’s senior season has also been highlighted by four All-SEC honors as the SEC Indoor Bronze Medalist and SEC Outdoor Silver Medalist in both the 400 meters and 4×400-meter relay. He ended his career as one of the most decorated sprinters in the history of the Tiger program as a four-time NCAA Champion, eight-time All-American and eight-time All-SEC performer in his two seasons at LSU.

Senior All-American Quincy Downing came up short in his bid to join his teammate on the plane to Beijing when he turned in a sixth-place finish in the final of the men’s 400-meter hurdles. While lining up in this final of the 400 hurdles at the USA Championships for a second-straight season, Downing stopped the clock in 49.77 for sixth place after qualifying with a run of 49.75 in his semifinal heat on Friday.

Bershawn “Batman” Jackson won his fifth career U.S. Outdoor title in the men’s 400-meter hurdles when he closed strong down the stretch to overtake Johnny Dutch (48.43) and Kerron Clement (48.44) at the tape for the win with a time of 48.29. Downing also followed 2015 NCAA Champion Michael Stigler (48.96) and Jeshua Anderson (49.22) across the finish line.

Downing, the NCAA Outdoor Bronze Medalist in 2014 and NCAA fourth-place finisher this season, improved upon his seventh-place finish from a year ago with a career-best sixth-place showing on Saturday.

Three Lady Tigers also lined up in the USA Championships final in the women’s 100-meter hurdles during Saturday’s competition as the World’s No. 2-ranked hurdler this spring in Jasmin Stowers led the trio with a fifth place after crossing the finish line in a wind-legal 12.65 (-0.1). Former All-SEC hurdler Tenaya Jones followed Stowers in sixth place at 12.89, while two-time Olympian Lolo Jones did not finish the race.

Grabbing the three spots on Team USA in the women’s 100 hurdles were 2008 Olympic Champion and 2012 Olympic Silver Medalist Dawn Harper-Nelson with a winning run of Kentucky’s NCAA Champion Keni Harrison in second place at 12.56 and 2015 World leader Sharika Nelvis in third place at 12.59. Reigning World Champion Brianna Rollins did not compete while already owning a bye into the World Championships.

Also advancing to the USA Outdoor final in the women’s 400-meter hurdles for the fourth-straight season during Saturday’s action was former Lady Tiger national champion Cassandra Tate, who posted a personal best of 54.51 for second place in the first semifinal heat. Tate is a threat to earn her spot on Team USA as the reigning USA Outdoor Bronze Medalist in the event.

Four other athletes qualified for the semifinal rounds in their respective events as they will return to Hayward Field to compete in Sunday’s finale as senior Joshua Thompson posted the seventh-fastest time in the day in the men’s 110-meter hurdles at 13.56 (+0.8), senior Aaron Ernest clocked the 13th-fastest time in the men’s 200 meters at 20.41 (+1.7) and former Lady Tigers Muna Lee (22.83) and Kimberlyn Duncan (22.87) posted a 10th-fastest and 12th-fastest time of the afternoon, respectively, in the women’s 200 meters.