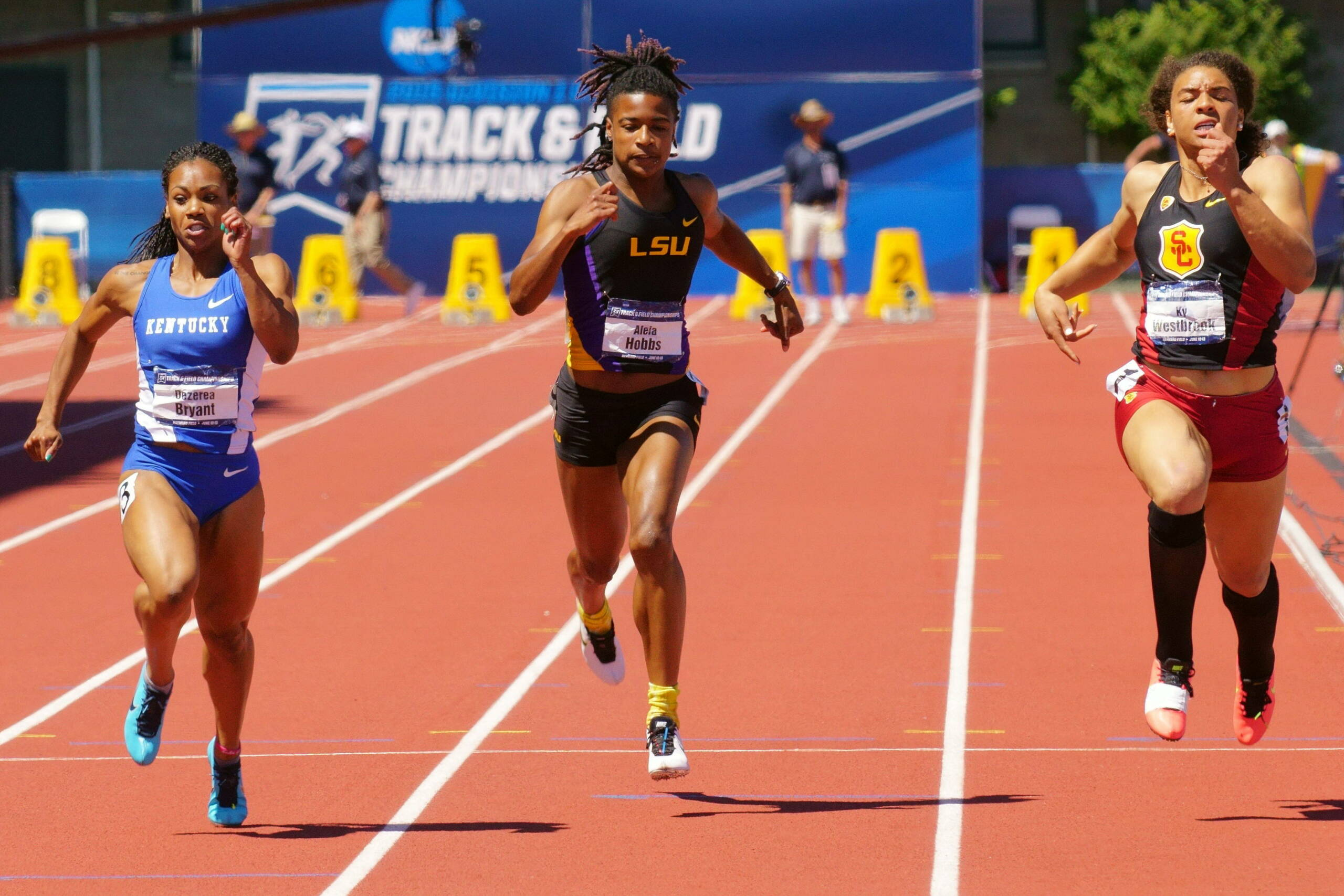 EUGENE, Ore. – LSU’s All-American sprinter Aleia Hobbs earned her spot on Team USA for the first time in her athletics career on Friday afternoon when she sprinted to a silver-medal-winning second-place finish in the 100-meter final at the 2015 USA Junior Outdoor Track & Field Championships running this weekend at Oregon’s Hayward Field.

Hobbs lined up as a gold-medal favorite in the USA Junior final after running her second-fastest wind-legal time of the season at 11.23 seconds (+1.4) to win her qualifying heat earlier in the day.

Lining up alongside the likes of Lady Tiger teammate Mikiah Brisco and high school sprint star Teahna Daniels, the second-fastest qualifier in the preliminary round, in the final, Hobbs knew it would be a fast race to the finish line for the two spots up for grabs for the U.S. squad going to the Pan American Junior Championships later this summer from July 31-Aug. 2 in Edmonton, Alberta, Canada.

And she punched her ticket by the narrowest of margins when she crossed the finish line in 11.38 (+0.6) to win the USA Junior silver medal, finishing just one one-hundredth of a second ahead of Southern California’s Ky Westbrook (11.39) as the bronze medalist in the event. Daniels was crowned the USA Junior Champion with a winning run of 11.24 in the final.

Hobbs is among the premier junior athletes from across the country competing at the University of Oregon this weekend alongside their senior counterparts at the USA Outdoor Track & Field Championships also being held at Hayward Field through Sunday afternoon. She will soon step onto the international stage for the first time with her performance on Thursday afternoon.

Hobbs earned her spot on Team USA going to the Pan Am Junior Championships next month on the same track in which she took home a pair of All-America honors in leading the Lady Tigers at the 2015 NCAA Division I Outdoor Track & Field Championships two weeks ago. That’s when she placed sixth in her first national final in the 100-meter dash and ran the second leg of LSU’s 4×100-meter relay team that scored a fifth-place finish in the final for an outstanding start to her collegiate career at the NCAA Championships.

Congratulations to Aleia Hobbs for qualifying for Team USA going to the Pan Am Junior Championships! #USATFOutdoors pic.twitter.com/OJyo7fYfdf

Hobbs was not the only LSU Track & Field athlete to give herself an opportunity to earn a spot on Team USA during this weekend’s action at Hayward Field as Tiger seniors Vernon Norwood and Quincy Downing will run in Saturday’s finals in the 400-meter dash and 400-meter hurdles looking to earn their plane ticket to Beijing in August for the IAAF World Championships in Athletics.

Returning to the same Hayward Field track on which he was crowned the NCAA Outdoor Champion just two weeks ago, Norwood matched his NCAA-title-winning time of 45.10 for second place in the second semifinal heat of the men’s 400 meters as he trailed only reigning World Champion LaShawn Merritt (44.78) across the finish line in the race.

Norwood qualified for the 400-meter final with the sixth-fastest time between the two semifinal heats as the top three finishers in Saturday’s final will qualify for Team USA going to the World Championships.

Norwood is into the 400m final at #USATFOutdoors matching his NCAA-title-winning time of 45.10 for 2nd in the heat! pic.twitter.com/A9rAeboRlx

Downing preceded his teammate by advancing to the final of the men’s 400-meter hurdles at the USA Championships for the second-straight season as he stopped the clock in 49.75 for third place in the first semifinal. Qualifying for the final once again with the seventh-fastest time of the semifinal round, Downing will look to improve upon his seventh-place finish from a year ago and challenge for a World Championship berth.

Finishing 1-2 in the second qualifying heat of the 100 hurdles were Stowers and Lolo Jones as they emerged with the third-fastest and sixth-fastest times of the day, respectively. Tenaya Jones followed in 12th place for the first round as she took fourth place in the first heat of the day.

Tate, the No. 8-ranked 400-meter hurdler worldwide for the 2015 season, followed her fellow Lady Tiger alumnae by running the fastest qualifying time of the day at 55.58 to win the fourth and final preliminary heat in her specialty. The 2012 NCAA Champion is the reigning USA Outdoor Bronze Medalist in the 400 hurdles and will look to crack the Top 3 once again to qualify for Team USA outdoors for the first time.

Friday’s field events were highlighted by a personal-best performance from LSU’s former All-American triple jumper Lynnika Pitts as she soared to a lifetime best of 45 feet, 3 inches on her second attempt in qualifying to score a fourth-place finish in this year’s USA Championships final. The reigning USA Outdoor Bronze Medalist in the women’s triple jump, Pitts eclipsed her previous wind-legal PR of 44-4 ¾ she set two weeks ago on June 13 while competing at the San Diego Imperial USATF Open Championships in Chula Vista, California.

Sophomore All-American Rebekah Wales returned to the same runway on which she threw 178-0 for a fourth-place finish nationally in the javelin final at the NCAA Championships two weeks ago to secure 12th place in Friday’s event at Hayward Field with a series-best throw of 172-5 on the day.