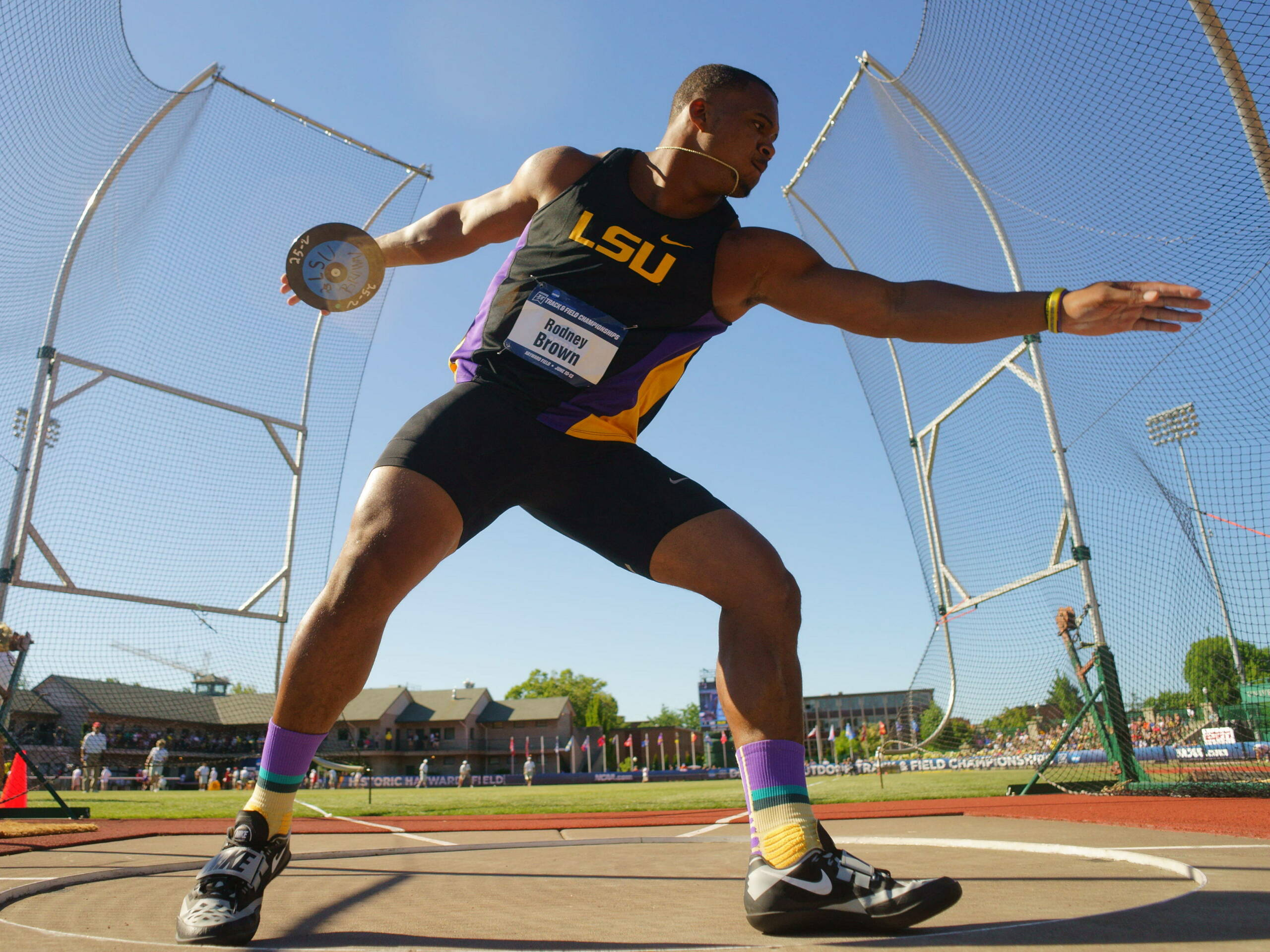 EUGENE, Ore. – LSU’s All-American discus thrower Rodney Brown took a big step toward earning his spot on Team USA for the IAAF World Championships in Athletics later this summer when he picked up a fourth-place finish in the men’s discus final in Thursday’s opener at the 2015 USA Outdoor Track & Field Championships at Oregon’s Hayward Field.

Brown opened the competition with his series-best throw of 208 feet, 10 inches (63.66m) to move to second place behind ASICS’ Russ Winger (211-1) early in the second flight. He then slipped to third place with Jared Schuurmans posted a winning mark of 212-1 in the second round, before taking fourth place into the final when Andrew Evans also threw 208-10 (63.67m) in the third round.

Brown held onto the fourth position through the final three rounds of throws as he was followed in the competition by Tennessee’s NCAA Champion Tavis Bailey in fifth place with a throw of 201-8.

The Tiger senior is one step closer to qualification for the World Championships with his performance as the second-ranked finisher who owns the “A” qualifying standard for the international championship being held Aug. 22-30 in Beijing, China. The Top 3 discus throwers who have achieved the “A” standard will earn the right to represent the United States at the World Championships later this summer.

Of those finishing at the top of the standings in Thursday’s competition, only Brown and Schuurmans have met the “A” qualifying standard of 213-3/65.00m as of the beginning of the open qualifying period that began on Oct. 1, 2014. Schuurmans threw a U.S.-leading 216-10 at a meet in Claremont, California, on June 7, while Brown threw his seasonal-best and personal-best mark of 213-5 in defending his Penn Relays title on April 25 to smash his own LSU school record and Penn Relays meet record as the leading discus thrower in program history.

Both Winger and Evans have yet to achieve the “A” standard for the World Championships since the start of the qualifying period as Winger owns a best of 211-1 thrown in Thursday’s event and Evans has thrown a top mark of 209-8 in the same competition as Schuurmans in Claremont on June 7. They have until the IAAF’s Aug. 10 deadline to supplant Brown and claim their place on Team USA going to the World Championships.

Two Tiger seniors advanced to the semifinal round in their events as heat winners in Thursday’s opener as NCAA Champion Vernon Norwood cruised to an easy win in the fourth heat of the men’s 400-meter dash with a run of 45.49 seconds before All-American Quincy Downing took the tape in the first heat of the men’s 400-meter hurdles with a time of 49.95.

Norwood, who was crowned a national champion in both the 400 meters and 4×400-meter relay in each of his last two races at Hayward Field on June 12, crossed the finish line in the fourth heat with a time of 45.49 for the seventh-fastest time of the first round of qualifying. He beat adidas’ Calvin Smith (45.71) to the finish line by more than two tenths of a second.

Downing followed by winning the first heat of the 400 hurdles in a time of 49.95 as he crossed the finish line head of Kerron Clement in second place at 50.15. Downing’s time was the third-fastest in the opening round, following NCAA Champion Michael Stigler (49.66) and Nike’s Jeshua Anderson (49.80) in the second heat.

LSU’s SEC 800-meter champion Julian Parker also advanced to Friday’s second day of competition with a qualifying performance in the first round of the men’s 800 meters. He grabbed the last spot into the semifinal on time after stopping the clock in 1 minute, 48.22 seconds for fifth place in the fourth qualifying heat. Parker’s time was the 14th-fastest overall in the opening round of the event.

Former Tiger Richard Jones, the 2010 SEC Champion in the event, finished in 26th place overall in the preliminary round as his time of 1:50.06 earned him a sixth-place finish in the second qualifying heat.

Two Lady Tiger alumnae will also line up in the semifinal round of the 800 meters on Friday night as former SEC Champions and All-Americans Charlene Lipsey and LaTavia Thomas posted qualifying times during the first round of the women’s competition. Lipsey took third place in the first heat with the fifth-fastest time of the day at 2:02.48, while Thomas advanced on time with a run of 2:03.22 for 11th place in the opening round.

Also earning her spot in Friday’s semifinals was former Lady Tiger national champion Kimberlyn Duncan, who sprinted to the finish line in a windy 11.08 (+4.5) for fifth place in the second heat with the 14th-fastest run in the qualifying round. Finishing in 30th place overall on the afternoon was former Lady Tiger All-American Kenyanna Wilson with a time of 11.51 (+2.1) for eighth place in the third heat.

In other field-event action, former Tiger All-American Jeremy Hicks took home an eighth-place finish in the men’s long jump competition with a series-best wind-aided jump of 26-3 ¾ (+2.9) on his first jump of the day, while Lady Tiger senior and NCAA Outdoor Bronze Medalist Tori Bliss threw a best of 57-1 ½ on her first attempt for 10th place overall in the women’s shot put.

Friday’s events from Hayward Field will feature a live television broadcast on the NBC Sports Network from 9-11 p.m. CT, while fans can also watch events during the second day of this year’s USA Outdoor Track & Field Championships online at http://www.usatf.tv from 11:15 a.m.-9 p.m. CT.

Two Lady Tiger freshmen will also be in action for the first time on Friday as sprinters Mikiah Brisco and Aleia Hobbs will line up in the 100-meter dash in the USA Junior Outdoor Championship running simultaneously on the Hayward Field track this weekend. They are looking to earn their place on Team USA going to the Pan American Junior Championships later this summer with a top-two finish in their event.