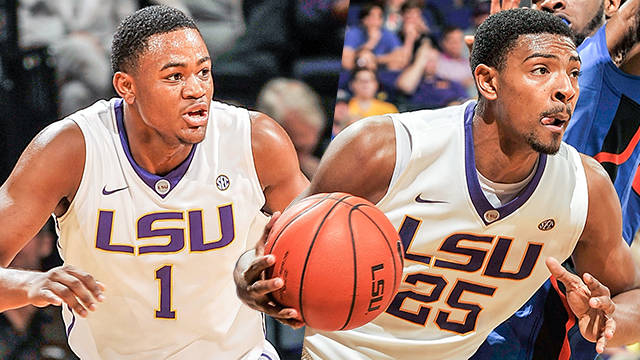 BATON ROUGE – For the 14th time in LSU Basketball history, a player was chosen in the first round of the National Basketball Association draft as Jarell Martin of Baton Rouge was selected by the Memphis Grizzlies.

It was Memphis’ only pick of the two-round event.

While Martin watched the draft at a local restaurant in Baton Rouge, Mickey was in the stands for the draft and did walk across the stage.

Martin, who played two years at LSU, averaged 16.9 points per game and 9.2 rebounds (both third in the Southeastern Conference) and shot 50.9 percent from the field (202-397, 4th in the league). He made a team best 140 free throws and had 15 double doubles while earning first-team All-SEC honors and was an honorable mention All-American selection.

Mickey, who also left after his sophomore season, averaged 15.4 points per game and 9.9 rebounds per game. He led the nation in block average at 3.64 blocks per game and shot 50.4 percent. He posted 16 double doubles, 25 for his career as he earned first-team All-SEC honors and was named a finalist for national Defensive Player of the Year.

“I was very nervous, my heart was pounding and for me to get my name called was a big relief for me,” Martin told the media in Baton Rouge. “It was a blessing for me to have my family around me. They were the ones that were around me when I was growing up, so it was great for me to come back home and share this experience with me.

Martin did visit Memphis during his workout trips and liked what he saw.

“When I went up to Memphis, I loved it because it reminded me of here — Baton Rouge,” he said. “The atmosphere around there reminds me of home, so it’s going to be my home away from home.”

Asked what he hoped to bring to the Grizzlies, Martin commented, “A lot of hard work and effort. I’m a guy that’s going to go out there and play hard the whole entire time being out there. Also my versatility, I can attack the basket and knock down shots and create plays for the players around me.”

There were a few media reports that the Grizzlies had told Martin they would pick him at No. 25.

“They said they were going to pick me at (No.) 25, but this draft got a little crazy unexpectedly. So it was pretty nervous for me and I was scared, but they wound up picking me,” Martin said.

Through it all, Martin was his normal, calm self. “I’m very excited on the inside, I’m just trying not to let it show on the outside. I don’t want to get emotional and cry or anything, but I’m very excited.”

Brad Stevens of the Celtics did do a brief interview on their web site and talked about their first three picks, including Mickey.

“Jordan Mickey is a guy who has a great first step for a guy that is a forward,” said Celtics Coach Brad Stevens. “He has great length. He is a big shot blocker from a numbers standpoint. Everyone brings a little bit of a different flavor to the table and it’s a good group.”

Jarell Martin’s celebrates with his family after being selected 25th overall by the @memgrizz #LSUNBA pic.twitter.com/UVfoK2p3tR

Jordan Mickey backstage after the pick in the NBA Draft. https://t.co/UwkmFHjy1h