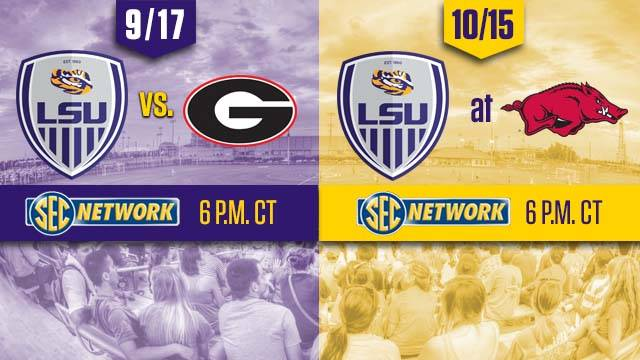 BATON ROUGE – Fans of the LSU Soccer program will be able to watch their Tigers in action on the SEC Network during the 2015 season as the league office announced Thursday that regular-season matches against the Georgia Bulldogs on Sept. 17 and Arkansas Razorbacks on Oct. 15 will feature on the network with both kickoffs set for 6 p.m. CT.

The Tigers will play host to Georgia at the LSU Soccer Stadium in Baton Rouge on Sept. 17 before going on the road to face Arkansas at Razorback Field in Fayetteville on Oct. 15 late in the regular season.

The Tigers feature as part of eight-straight weeks of SEC Soccer on the SEC Network that will run through the end of the regular season on Oct. 29. The SEC Network will then broadcast each match during the 2015 SEC Women’s Soccer Tournament through the semifinal round from Nov. 2-6, while ESPNU will carry the SEC Tournament Championship Match on Sunday, Nov. 8.

This marks the second-straight season in which SEC soccer and volleyball will receive extensive coverage on both the SEC Network and ESPNU with 80 games from around the league shown to a nationwide audience in the 2015 season. That includes 30 women’s soccer matches during the regular season and SEC Tournament.

Thursday’s announcement of the full schedules for ESPNU and the SEC Network comes just one day after the Pac-12 Conference announced that LSU’s season-opening match against the Oregon Ducks will open up its season-long coverage on the Pac-12 Network with kickoff set for 9 p.m. CT at Pape Field in Eugene.

LSU and Oregon will renew their series for the first time since the 2011 regular season when the Tigers picked up a 1-0 victory over the Ducks in the grand opening of their new LSU Soccer Stadium when they set a then program attendance record with 2,542 fans on hand for the match held on Sept. 9, 2011. LSU and Oregon have split each of their two matches with the Ducks winning their inaugural meeting on Aug. 28, 2005.