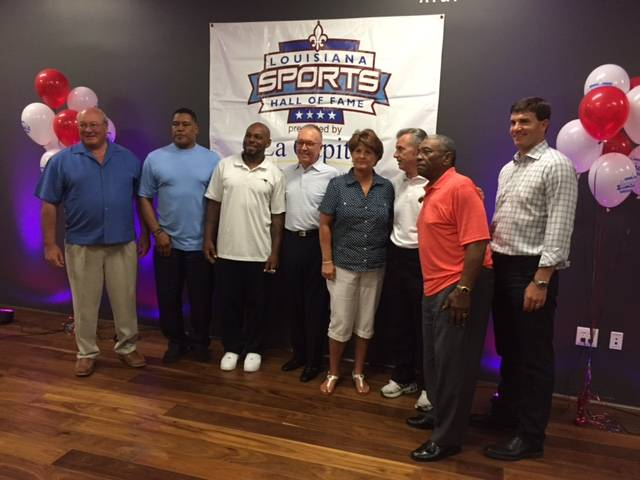 NATCHITOCHES, La. – Notes and quotes as most of the induction class of 2015 in the Louisiana Sports Hall of Fame met with the media Thursday at the Hall of Fame building.

There is a coaching vibe to this year’s class which features former LSU softball coach Yvette Girouard and former LSU/New England Patriots star Kevin Faulk (who now is an assistant coach at his high school alma mater, Carencro). Also in the class is former ULM head coach Pat Collins, former St. Aug HS and Southern Head Coach Otis Washington (who also coached one season at LSU as an assistant). The rest of the class is UL-Lafayette/NFL quarterback Jake Delhomme and thoroughbred trainer Frank Brothers.

Another coach, University of Alabama first-year head basketball coach Avery Johnson, will arrive in Natchitoches on Friday. Johnson made the hall based on his outstanding play in the NBA and coaching the Mavericks to the NBA title.

With Delhomme, Faulk and Girouard, there is quite an Acadian feeling to the class as well and Girouard spoke to that and began to get a little emotional as she thought about being the first softball coach and the only woman in the class.

“ I thought I had a lot in common with my Acadiana boys here and I say that fondly,” the fourth winningest coach in college softball after a combined 30 years at UL-Lafayette and LSU. “The girl from Broussard, the boy from Breaux Bridge (Delhomme) and a boy from Carencro (Faulk). But Jake’s the one that left, well Kevin did too, but Jake’s the one that left that the accent like me. All of a sudden Jake doesn’t talk like that. Jake is so eloquent.

“I was so proud when I heard who I was going in with. We (the coaches) we all kind of share that bond. We all can share those stories. For a little girl that never got to play, all I ever wanted to do was play. So to walk into this magnificent Hall of Fame, it’s beyond my expectations.”

Girouard suddenly stopped as the emotions of the moment began to come through.

“Why am I the only one about to cry,” she smiled. “Probably because I’m the only woman. That’s because I didn’t get to play and it looks like God wanted me to succeed in another avenue and I became a coach. This is for all of us that had to fight so hard for the women who now play in $13 million stadium. I accept this award for all of those people.”

One of the questions involved why she finally decided to come to LSU after turning the job down twice.

“It was the hardest decision of my life,” admitted Girouard. “In fact, we had a party the night before my mom did. I walked out of the room because I couldn’t even swallow. I was going to be introduced the next day at LSU. I had been at ULL for 20 years. I started it from the ground. It was my baby. It was my passion. I didn’t take a vacation for 11 years. I was addicted to trying to make it grow and get better. But it came to a point where it was finally time to take care of Yvette. It was all about professionally and personally, but it was the decision I ever made. It made me change. It made me grow. I couldn’t have been treated any better by the people at LSU.”

Faulk, who has three Super Bowl rings with the New England Patriots where he played for 13 years in his NFL career, spoke frankly about his career in high school, college and the Patriots.

“There is a reason we are here,” he said. “We did some spectacular things.”

Faulk talked about the people who have been a part of his life that helped him make good decisions that led to his success on all levels and into his high school coaching career.

One of those was longtime former LSU academic advisor Dr. Tommy Karam.

“I had an opportunity to leave after my junior year and go to the pros,” Faulk recalled. “Dr. Karam, our academic counselor came up to me and said ‘Kevin, let me talk to you. You understand that you only have 18 hours to graduate college.’ Really? I went home to talk to my girlfriend, who is now my wife, and I told her about it and she said, ‘Well, Kevin what you gonna do?’ One of the most important things in my life was my mom (who passed away in ’04). For me to get my degree would probably mean more to her than anything I’ve ever done, even getting this (the HOF) right now. I made that decision to get my degree. If I leave, it’s gonna be tough to get my degree. We didn’t have a good year that year, but I still had fun. I still loved it because it was with my teammates. We really had a great time I will tell you that.”

The Hall of Fame weekend continues on Friday with the annual golf tournament at Oak Wing Golf Club in Alexandria at 10 a.m. and then a tailgate event with music and later fireworks at the Landing Restaurant on Front Street beginning at 7 p.m. The induction ceremony will take place at 6 p.m. Saturday night in front of the largest crowd in the 10-year history of the event in the Natchitoches Events Center. The ceremony is sold out.