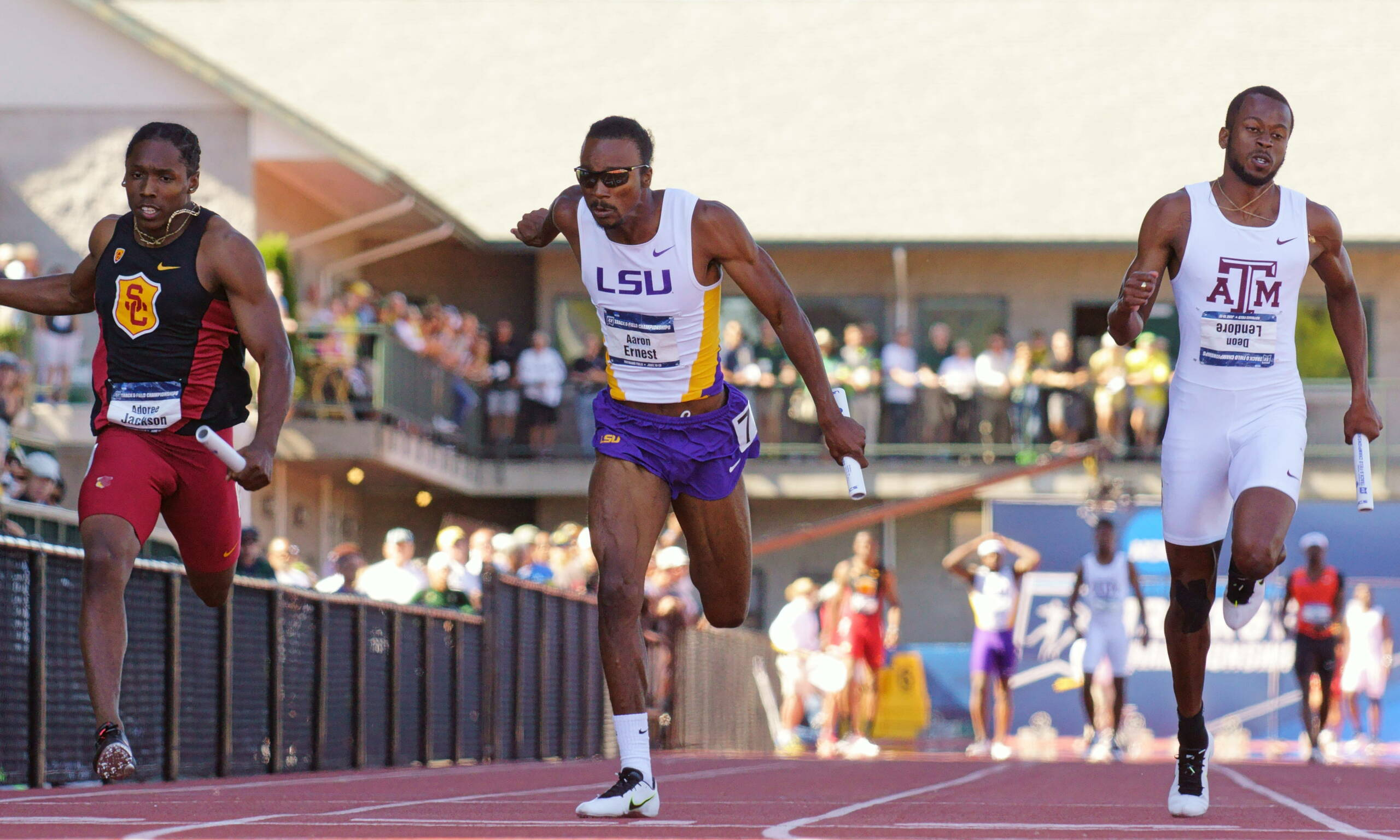 BATON ROUGE – The LSU Track & Field teams only just ended the 2015 collegiate season at the NCAA Division I Outdoor Track & Field Championships two weeks ago, but 21 Tigers and Lady Tigers past and present are set to return to Eugene, Oregon, this week for the four-day USA Outdoor Championships beginning Thursday at Hayward Field.

These Tiger and Lady Tiger greats are looking to earn their trip to Beijing, China, to represent the United States at the 2015 IAAF World Championships in Athletics being held Aug. 22-30.

The top three finishers in each event at the USA Outdoor Track & Field Championship that have met the “A” qualifying standard in their respective events will earn the right to compete for Team USA in Beijing later this summer. Defending World Champions will receive an automatic exemption to defend their titles at this year’s World Championships, regardless of their finish in Eugene.

The 2015 USA Outdoor Track & Field Championships will feature live television coverage during the final three days of the competition as fans have their first opportunity to catch the championship on Friday night from 9-11 p.m. CT on NBC Sports Network. Saturday’s events will air live on NBC from 3-5 p.m. with Sunday’s events broadcast on Universal Sports from 2-3 p.m. and NBC from 3-5 p.m.

Just as he had done for the Tigers throughout the 2015 season, senior Vernon Norwood looks to set the pace again this weekend as he returns to the site where he was crowned the NCAA Champion in the 400 meters dash before anchoring the Tigers to the national championship in the 4×400-meter relay. His was a performance that spearheaded the Tigers to a trophy-winning fourth-place team finish nationally.

Norwood has emerged as one of the world’s leading 400-meter sprinters with his performance this spring as his seasonal-best and personal-best time of 44.44 seconds ranks No. 5 worldwide for 2015.

Tori Bliss, the NCAA Indoor Silver Medalist and NCAA Outdoor Bronze Medalist in the women’s shot put, will also be in action as she headlines the current crop of Lady Tigers scheduled to compete this weekend. She is the No. 17-ranked shot putter worldwide and the No. 8-ranked American in the field with a seasonal best and personal best of 60 feet, 8 inches to her credit this spring.

Three Tigers and Lady Tigers who just missed the medal podium at the NCAA Championships as the fourth-place finishers in the final of their events make their return to Hayward Field with senior Quincy Downing (400 hurdles), senior Joshua Thompson (110 hurdles) and sophomore Rebekah Wales (javelin) all in action this week. Senior sprinter Aaron Ernest will also line up in both the 100 meters and 200 meters this weekend after a third-place finish in the 4×100-meter relay and fifth-place finish in the 200-meter dash at the NCAA Championships.

Senior SEC Champions Rodney Brown (discus) and Julian Parker (800 meters) round out LSU’s contingent making a return to the University of Oregon in the wake of the NCAA Championships two weeks ago.

Stowers enters the meet as a favorite to punch her ticket to Beijing as the World’s fastest sprint hurdler for the 2015 season with a career-best time of 12.35 to her credit. Stowers became the No. 7-ranked 100 hurdler in World history with her win at the Doha Diamond League Meeting back on May 15. She has run 12.40 or faster three times this spring as the No. 1-ranked hurdler globally.

Tate is also one of the Top 10 performers worldwide in the 400-meter hurdles this season after running her seasonal-best time of 54.73 at the Birmingham Diamond League Meeting on June 7. She is squarely in the mix to earn a spot on Team USA as she enters the weekend as the No. 4-ranked American in the field in the intermediate hurdles.

Hayward Field will also play host to the 2015 USA Junior Outdoor Track & Field Championships along with the senior meet as Lady Tiger freshmen Mikiah Brisco and Aleia Hobbs will line up in the 100 meters. Hobbs took home All-America honors as the sixth-place finisher nationally in the 100-meter dash, while also joining Brisco on LSU’s All-American 4×100-meter relay to cap their debut seasons in Baton Rouge.

A complete list of the current and former LSU Track & Field athletes competing at the USA Championships this weekend along with a daily event schedule and summary of live television coverage is listed below. Events listed are subject to change based on round-by-round qualifying and weather delays during the meet.