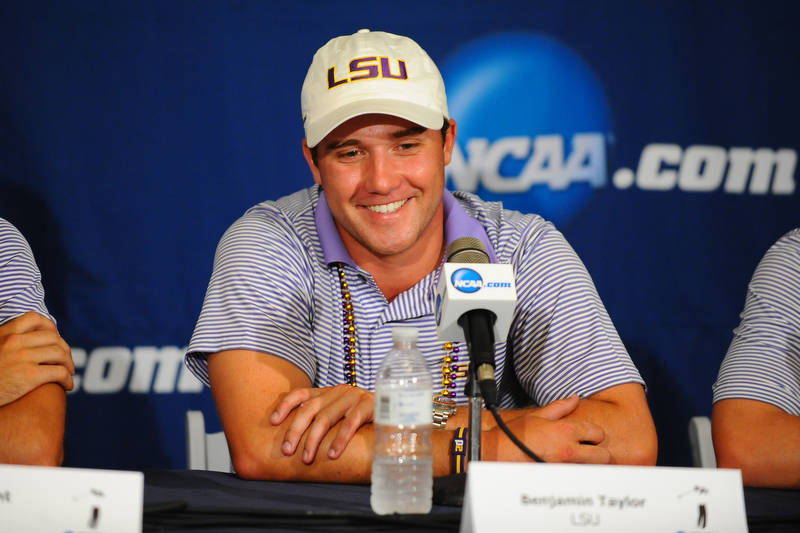 BATON ROUGE – After posting a perfect 3-0 match play record in LSU’s run to the national championship earlier this month, senior All-American Ben Taylor returned to his native Great Britain and opened his summer schedule with an appearance in match play at the 120th Amateur Championship held at Carnoustie Golf Links in Angus, Scotland.

In two rounds of stroke play qualifying, Taylor followed an even-par round of 72 at Carnoustie on June 15 with a brilliant 3-under par 67 at nearby Panmure Golf Club on June 16 to tie for seventh place with a final score of 3-under 139 in 36 holes. Taylor tied six other golfers for seventh place in stroke play in a field featuring 288 of the top amateurs from across the globe.

Taylor round at Panmure was highlighted by five birdies with just one bogey as he soared up the final leaderboard with a 3-under 67 for his best performance over the two rounds. He quickly dropped to 3-under on his round with three birdies in his first five holes at Nos. 1, 4 and 5 before falling back to 1-under through the 12th. Back-to-back birdies at Nos. 14 and 15 sealed his qualification for match play.

While earning a top seed in match play, Taylor was unable to run his streak to four-straight wins in match play competition this month after suffering a 1-up defeat to French amateur Paul Barjon last Wednesday.

Barjon advanced to the quarterfinals of match play as he followed his win over Taylor with a decisive 6-and-5 win over USA’s John Oda before falling 3-and-2 to French compatriot Antoine Rozner on Thursday.

Despite failing to qualify for The 144th Open Championship at St. Andrews by winning this year’s British Amateur, Taylor took one step closer on Monday when he fired a 1-under 70 at Hankley Common Golf Club to nab one of the eight spots into the next round from The Open Regional Qualifier held at the course in Elstead, Surrey, England. Taylor finished his Open Regional Qualifier in a four-way tie for fifth place to finish three off of the top of the leaderboard with Knebworth’s Jamie Rutherford firing a winning 4-under 67.

Taylor will next compete at The Open Qualifier on June 30 at either Royal Cinque Ports Golf Club in Deal, Kent, England, or Hillside Golf Club in Southport, England, looking to earn his spot in the field at the 144th Open Championship to be held July 16-19 on the Old Course at The Royal & Ancient Golf Club of St. Andrews in just three weeks.