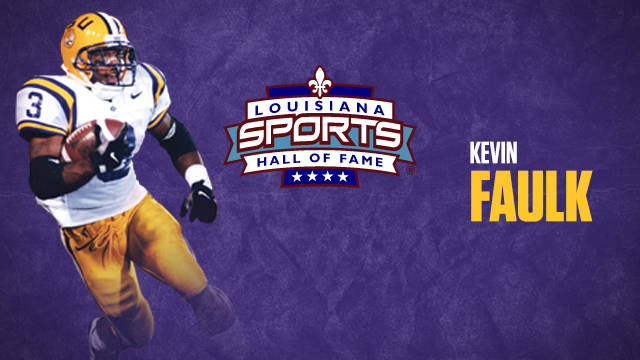 Editor’s Note: The annual induction ceremonies for the Louisiana Sports Hall of Fame are this Saturday – June 27 – at the sold-out Natchitoches Events Center. Here is a look at the second inductee who had major moments at LSU – football star Kevin Faulk.

Early impressions about Carencro’s Faulk were on target

By Kevin Foote, Written for the LSWA

Banks Menard still remembers the first time he ever heard about Kevin Faulk.

He was on the staff of new Carencro High head coach Mac Barousse at the time when the town’s middle school coach showed up at practice one day with a proclamation.

Carencro Middle coach Billy McCauley told he and Barousse that this seventh grader he had would be the best thing to ever hit the field at Carencro High.

At the time, an All-State caliber quarterback named Greg Laxey had just left the program to begin a college career with the hometown Ragin’ Cajuns.

“We were like, ‘Yeah right,’ but I decided that I had to go see this kid,” Menard said. “I watched this kid beat Anderson Middle, which I’m not sure had ever lost a game before, by himself. He was incredible.”

As quickly as he could, Menard reported back to Barousse.

“Coach, you’ve got a stud coming up,” he exclaimed. “Kevin Faulk is the real deal.”

For the next two decades, that seventh grader proceeded to make McCauley a prophet.

As a freshman at Carencro High, he intercepted nine passes starting at safety. As a sophomore, he led the Golden Bears to the first football state championship in the history of Lafayette Parish.

“Even as a freshman, his work ethic was relentless,” former Carencro High assistant coach Tony Courville said. “Sure he had a lot of God-given talent, but his mental strengths was as big or bigger than his physical strengths.

“I will never forget this 15-year-old kid during a big moment in the state championship game just tap Mac (Barousse) on the shoulder and say, ‘I got it coach.’ You don’t see that very often.”

The two-time State Offensive MVP and USA Today and Parade All-American then took his game to LSU where he restored a winning attitude to the Tigers with three straight winning seasons after the program had endured six consecutive losing seasons prior to his arrival.

Faulk was drafted by the New England Patriots in the second round of the 1999 NFL Draft.

During his 13 years with the Patriots, he played in five Super Bowls – winning three – was honored on the Patriots 50-year anniversary team and finished as the franchise’s all-time leader in all-purpose yards.

All of those statistics, though, only begin to provide the reasons why “Kevin Faulk is the real deal.”

Faulk’s impact on football in Louisiana will be cemented forever with his induction into the Louisiana Sports Hall of Fame Saturday, June 27 in Natchitoches.

“This honor is a big one,” Faulk said. “This is home. This is recognition from your peers back home.”

Home has always meant a big deal to Faulk.

These days, he’s back at Carencro High coaching, hoping to provide the kind of leadership today’s youth need.

“This is where I come from,” Faulk said. “I take it very seriously. I’ve been there. I know the things that these kids learn in high school are lessons they can take with them moving forward.”

The players Faulk are currently coaching weren’t even alive when Faulk’s legend really began back in the fall of 1992 as a sophomore quarterback.

“When you’re a sophomore, you’re not even thinking about pressure,” Faulk said. “Truthfully, I didn’t feel any pressure. What pressure? All I had to do was hand the ball off to Ernest Lazard or Derrick Beavers. That wasn’t pressure.”

And yet, cool beyond his years, it was Faulk being named as the MVP in the 28-27 overtime win over Neville in the state championship game.

Before his high school career was over, Faulk would amass 4,877 rushing yards at a clip of 8.1 a carry and 7,612 all-purpose yards with 89 touchdowns.

“He was always thinking that there was something he could do better,” Menard said. “He worked at it. He went that extra mile. He had speed, vision and such a great knowledge of the game. He had passion for the game.

“When you have it, you have it. He’s one of those kind of athletes that you only get every 10 or 20 years.”

“The first day I showed up on campus was the day Kevin Faulk came to visit LSU,” Haywood said. “I was stunned. All of those recruits were treating him like a rock star, asking him for his autographs.”

Patrick Pass was one of those prospects who was a big fan of Faulk and he wasn’t even being recruited by LSU. He was from Tucker, Ga.

A USA Today All-American the year after Faulk left Carencro, Pass said he would regularly wake up each Saturday morning to watch the ‘Countdown to Signing Day’ TV program just so he could watch Faulk’s highlights.

“I was a big fan of Kevin’s,” said Pass, who played at Georgia and then was a teammate of Faulk with the Patriots from 2000-06, 2009. “He was unbelievable. He had some incredible highlight-film runs.

“When we (Georgia) played LSU in 1998, I was happy just to be on the same field with Kevin Faulk.”

If Haywood didn’t quite get it initially, it didn’t take him much time on the practice field for Haywood to learn what all the fuss was about.

“He saw things before it happened. “He understood the technique and the fundamentals so well.”

Faulk possessed the kind of attributes that can make it easy to coach, sort of like being the quarterback coach for Tom Brady or Peyton Manning.

“Booger McFarland would joke with me during practice, ‘Coach Haywood, you can have the day off again today.”

The only thing Faulk didn’t feature was a tall frame. During his days with the Patriots, he was listed at 5-foot-8.

“I never thought his size was a problem,” Haywood said. “He was as physical as (other LSU backs) Cecil Collins, Rondell Mealey or Kendall Cleveland.’’

By the time Faulk left LSU, his 4,557 yards rushing was second in SEC history only behind Georgia’s Herschel Walker and his 6,833 all-purpose yards and was fifth in NCAA history and tops in the SEC, before being eclipsed by Tim Tebow in 2009.

Once in the NFL, Faulk’s big impact wasn’t as easily noticeable … to some at least. The Patriots’ coaches, players, media and sure noticed him.

But when he was elected to the franchise’s 50th Anniversary team, and as the story goes, he accepted that news with little fanfare as always.

Owner Robert Kraft called him into office to inform Faulk of the honor.

“I thanked him and told him that I didn’t believe it,” he said. “Then I told him I had to go to practice.”

In short, that was Faulk.

“He was always humble and hard-working,” Menard said. “He still is.”

It was that approach that allowed Faulk to play 13 years in the NFL. Instead of seeking fame when other teams came calling to make him a featured back after his first contract ended in New England, Faulk stayed and just continued to play a huge role in helping the Patriots win.

Faulk gave credit to former agent and friend Raymond Brothers, Jr. for encouraging him to stay in New England instead of taking more short-term money elsewhere.

“What do you want to do?” Haywood remembered saying in discussing the issue with Faulk. “He said, ‘I want to play 10-14-15 years in the NFL.’

“I agreed with him at the time. What’s wrong with being a third-down back? Look how it worked out for him.”