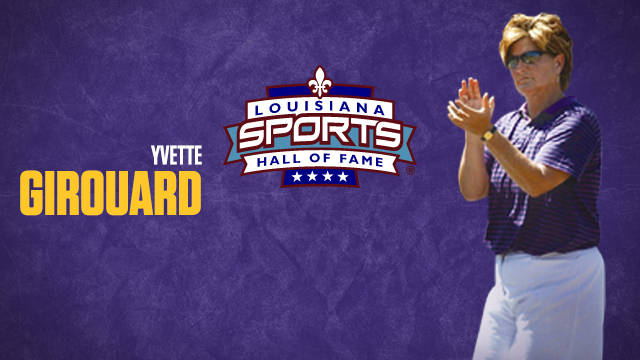 Editor’s Note: The annual induction ceremonies for the Louisiana Sports Hall of Fame are this Saturday – June 27 – at the sold-out Natchitoches Events Center. Here is a look at the first of two inductees who had major moments at LSU – softball coach Yvette Girouard.

by Dan McDonald, Written for the LSWA

If there was ever a coach who built a program from the ground up, it was Yvette Girouard.

And, shhhhh, don’t tell anyone. She had to steal the dirt for that ground.

“We didn’t have the budget for anything like that,” Girouard said of one of the many hurdles she had to leap while getting the UL-Lafayette softball program going in 1980. “They (her players) borrowed my dad’s truck and stole sand from somewhere.”

Girouard was also responsible for spreading that sand … and basically everything else that was involved in inaugurating a program that has now made 25 NCAA Tournament and six Women’s College World Series appearances in 26 years. Before she was done, someone else was worrying about getting the field ready, as she was busy going 759-250 in 20 years as head coach of the Ragin’ Cajuns and finishing fifth or better nationally three different times.

She added 526 more victories and two more third-place finishes in the College World Series while at LSU before retiring after the 2011 season. That’s a total of 1,285 wins, the fourth-highest total in NCAA history.

But for the self-proclaimed “little girl from Broussard,” it was never about the numbers. It was about opportunities, something she worked all her life to provide for her student-athletes at both schools.

“In the big picture, it was about the experiences,” she said. “When I see all those former players, they can’t remember the scores to any games, but they sure can remember the stories, and they’re all begging to tell them and hear them.”

Many of those former players will gather, and many of those stories are being rehashed as Girouard becomes the first softball coach ever inducted into the Louisiana Sports Hall of Fame, on Saturday, June 27 in Natchitoches.

But, seriously, could there possibly be anyone else to represent that sport, in this state?

She’s more proud of being a Louisiana native than she is of the 13 Louisiana Coach of the Year honors. She was the national Coach of the Year twice, as well as winning Coach of the Year accolades in three different conferences, and is already in the National Fastpitch Coaches Association Hall of Fame. But this one’s different, since it comes at the only place she ever called home.

And it all might not have happened, if a couple of her future players hadn’t recruited her.

Pat Pourciau, a St. Bernard Parish native and the starting pitcher for then-USL’s first-ever official team, had helped organize a club team and approached Cajun head women’s administrator Sherry LeBas about starting a true varsity team. One thing LeBas told her was that they needed a coach.

A few days later, Pourciau and fellow inaugural-team member Donna Clark approached Girouard, who had coached in the Lafayette Parish system but had left to take a full-time role in the iconic Ton’s Drive-In family business in Broussard.

“I told them I’d do it for a year,” Girouard said. “We had no salary, no real budget. But my mom finally told me that I was going to do this … that I was born to do this and not serve the public hamburgers.”

Instead, she began serving the public on-field success … but not right off the bat, pun intended. That first team, made up of tryouts who were already on the USL campus, went 7-15. That was her first and last non-winning season. A year later, the second-year Cajuns went 15-13. Two years later they won the Southland Conference.

“We found a bunch of shirts that matched and had ‘USL’ pressed on them,” Pourciau said. “We wore some red shorts and played with P.E. equipment. It developed character. You look back at it, and it’s a humbling experience, and it probably wouldn’t have happened without Yvette.”

Scholarships? Catcher Blaise Talbot came out of New Iberia Senior High a couple of years later and was the first softball player to receive any financial aid, but that financial help wasn’t what drove her. “I knew I wanted to be a Lady Cajun, Girouard said she wanted me to be a Lady Cajun, and that was it,” Talbot said.

“We didn’t have scholarships, but we had kids that loved playing softball,” Girouard said. “They would have done anything just to go to the games. A sandwich and a Coke was fine. It wasn’t about what they were given, they just wanted to represent the university and play softball. It was the climb, it was the struggle. It was fun … we didn’t know any better. It was just a simple, beautiful time.”

What was also beautiful to Girouard was the opportunity, something that was a cherished commodity in the days when schools were still figuring out what to make of Title IX. Support for women’s athletic programs, for the most part, was still in its infancy, and both Girouard and her early-year players had to do things to make their program possible that would stun current student-athletes.

Those early travails, though, built a bond, built a family, with Girouard as the pseudo-mom.

“You can’t describe it,” said Talbot, who caught nearly every game in the USL program’s second through fifth years. “The bond that was formed that quick, it was unexplainable. But you immediately knew there was a family, and Yvette made sure that we appreciated what we had. And you knew at some point that it would be special.”

The program she founded and then turned over to one of her star pupils, All-American pitcher Stefni Lotief, when she accepted the LSU position in 2001 now has more than 1,500 wins and 42 All-Americans. At her next stop, Girouard went 526-171-1 and won seven different SEC titles in 11 seasons with the Tigers.

She took over a good LSU program, and made it a great one. As the Tigers took off, the SEC did too, as illustrated by this year’s Super Regionals with eight of the 16 spots filled by SEC teams. She developed another rabid fan base and designed the sparkling Tiger Park complex that will be the envy of Power Five programs for years to come.

Alabama coach Pat Murphy, who since 1999 has taken the Crimson Tide to nine WCWS appearances and a 2012 national championship, got his start in the sport as a graduate assistant, then a fulltime assistant for Girouard at USL.

“Yvette’s legacy at LSU and within the SEC is still being felt today,” said Murphy, who coached with Girouard from 1990-94. “She raised the bar on competitiveness: with eight SEC schools in NCAA Super Regionals this year, much of that success can be traced back to Yvette and her days at LSU.”

It’s not just by chance that Louisiana has two legendary, nationally-known collegiate softball programs – both the Tigers and the Cajuns hosted NCAA Regionals and advanced to the Super Regionals in May – and Girouard built both of them. Of course, it took 10 years for her USL teams to become an overnight success, with the pieces finally falling together in 1990 when the Cajuns were ranked seventh nationally and claimed a first-ever NCAA berth.

“It was obvious my freshman year (1989) that the pieces were there,” said Oklahoma City product and eventual All-American Cathy Sconzo. “We were on the verge of becoming something big. It was a great feeling to be a part of that, and all of the former players were there cheering us on. They couldn’t have been more supportive.

“Girouard was wonderful about telling the stories and never letting the foundation of the program die. We heard the stories about painting the fences and laying the sod. Those teams weren’t regional teams, but they set the stage and made it possible for us to be there.”

They are indeed family, a family that stretches over two schools joined by Interstate 10 … bitter rivals on the field because of their proximity and national status. And that’s not a bad thing, especially since Girouard can sit back at her lakeside home in Baton Rouge, drift out to wherever the fish are biting in the late afternoon, and remember fondly the families that wouldn’t have been there if her own family and all her adopted daughters hadn’t made that first push.

“Alisa Smith (another early USL player/pioneer) had played volleyball and came over to softball, and she said that this is such a family compared to anything else she’d ever been associated with. That’s what made this special and keeps it special today.”

“A fellow teacher heard me talking one day about the impact that Girouard had on all our lives, and how immeasurable it has been,” Talbot said. “She said I was lucky to have played for her, and she’s right. How lucky are all of us?”