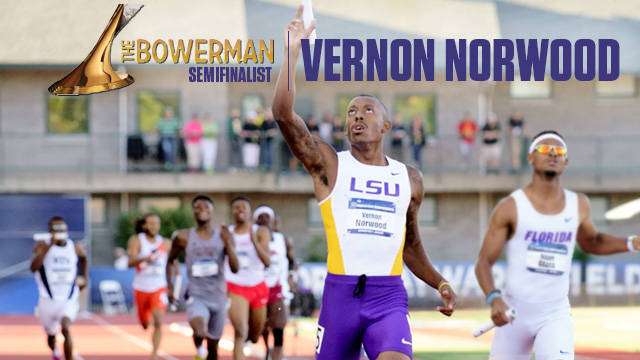 BATON ROUGE – After turning in one of the most dominant collegiate seasons by a 400-meter runner in recent memory, LSU senior Vernon Norwood was named Monday among the 10 track and field athletes from across the country as a men’s semifinalist for The Bowerman Award as announced by the U.S. Track & Field and Cross Country Coaches Association.

This marks the fifth time for an LSU athlete to be chosen as a semifinalist for The Bowerman as Norwood is the second Tiger selected to the list after former NCAA hammer throw champion Walter Henning became the first in 2010. Lady Tiger sprint great Kimberlyn Duncan was also a three-time women’s semifinalist in 2011, 2012 and 2013.

Norwood looks to become the second LSU Track & Field athlete to win The Bowerman after Duncan was recognized as the top women’s athlete during her historic junior season with the Lady Tigers in 2012.

Now in its seventh year of existence, The Bowerman is track and field’s equivalent to The Heisman Trophy in college football, and is presented annually by the USTFCCCA to the top collegiate athlete on both the men’s and women’s sides. Texas A&M’s Deon Lendore and Oregon’s Laura Roesler were the last to take home the award with their performance during the 2014 collegiate season.

The 10 men’s semifinalists named Monday will now be evaluated by the Bowerman Advisory Board with three finalists being announced by the USTFCCCA on the afternoon of Wednesday, July 8.

Norwood recently became the 14th sprinter in collegiate history to sweep NCAA Indoor and NCAA Outdoor championships in either the 440-yard or 400-meter dash with his victory in the 400-meter final on the evening of June 12 at the NCAA Division I Outdoor Track & Field Championships held at Oregon’s Hayward Field. The LSU senior sprinted to the finish line in 45.10 seconds to win the NCAA title by almost a half second in front of Oregon’s Marcus Chambers. He was also crowned the NCAA Indoor Champion after running an indoor PR of 45.31 in the national final run on March 14.

Norwood is only the second LSU Tiger to sweep national titles in the 400 meters in the same season, following in the footsteps of the great Xavier Carter during his sophomore season with the program in 2006.

After completing his NCAA title sweep in the 400-meter dash earlier in the day, Norwood also anchored the Tigers to the national championship in the 4×400-meter relay while turning in a 44.97-second split for his final race as an LSU Tiger. It marked LSU’s fourth NCAA-title-winning performance in the 4×400-meter relay outdoors in the program’s history that also includes wins in 2003, 2005 and 2006.

Norwood became one of the 10 fastest 400-meter sprinters in NCAA history during the 2015 season when he opened his outdoor campaign by racing to a personal best of 44.44 at the LSU Alumni Gold on April 18 at the Bernie Moore Track Stadium. While ranking No. 5 worldwide for the 2015 outdoor season, he also cracked the NCAA’s all-time Top 10 list as the No. 8-ranked 400-meter runner in collegiate history.

It was a performance that also moved Norwood to within striking distance of Derrick Brew’s 16-year-old school record of 44.29 when the Olympic Gold Medalist also set the SEC record in the 1999 season.

Norwood’s senior season has also been highlighted by four All-SEC honors as the SEC Indoor Bronze Medalist and SEC Outdoor Silver Medalist in both the 400 meters and 4×400-meter relay. He ended his career as one of LSU’s most decorated sprinters as a four-time NCAA Champion, eight-time All-American and eight-time All-SEC performer in his two seasons in 2014 and 2015.

The Morgan City, Louisiana, native now has his sights set on competing on the world stage this summer as he will run for a spot on Team USA during the USA Outdoor Track & Field Championships also being held at the University of Oregon in Eugene this weekend. Members of Team USA will compete again later this summer at the 2015 IAAF World Championships in Athletics in Beijing, China, in August.