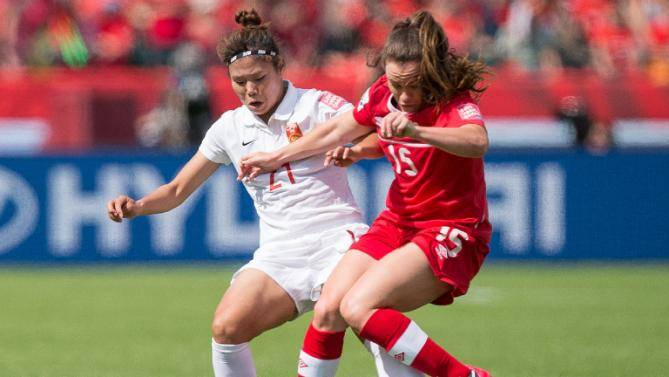 BATON ROUGE – Thanks to Josée Bélanger’s goal in the 52nd minute and former LSU standout Allysha Chapman leading a dogged defensive display from the hosts, Canada advanced to the quarterfinals of the 2015 FIFA Women’s World Cup with a 1-0 shutout of Switzerland in their Round of 16 match at BC Place Stadium in Vancouver on Sunday night.

With 53,885 supporters on hand at BC Place Stadium – a record crowd for a Canadian men’s and women’s national team in any sport – Canada earned its place in the World Cup quarterfinals for the first time since 2003, while competing in the knockout rounds for just the second time in six appearances all-time in the tournament.

Following a first half in which both teams failed to find a breakthrough, Bélanger scored the goal that proved to be the winner when she swept home Christine Sinclair’s entry from near the penalty spot.

With Sinclair crossing a clearance by the Swiss defense back into the area, Bélanger curled a left-footed effort beyond the reach of Swiss goalkeeper Gaelle Thalmann and inside the left post to break the deadlock with her first goal for the Canadian senior squad in nearly five years. Bélanger nearly added a second goal late on when she had another shot cleared off the line in the final minutes.

Canada now awaits the winner of Monday’s Round of 16 match between England and Norway as they will meet in Saturday’s quarterfinal at 6:30 p.m. CT also at BC Place Stadium in Vancouver.

“We needed the fans, but I’m really proud of the way the girls played today,” said Canada’s head coach John Herdman to CanadaSoccer.com following the match. “They just stuck to their tasks, they made it hard today and defended well. When our moments came, I thought we took our chances today. That was fantastic from Bélanger, a lovely touch from Sinclair.

“As a group, I think we’re really proud to represent our country here in (British Columbia) and take us through to the quarterfinals. That’s job done. It’s what we’ve wanted to do, and we’ve done it.”

Chapman, a three-time All-SEC defender and the 2011 SEC Defensive Player of the Year during her time in Baton Rouge, has been an anchor of the Canadian defense since making her debut with the senior team in the fall of 2014. Sunday marked her 16th appearance and 14th start with her national team since making her debut on Oct. 25, 2014, in a friendly match against Japan.

“Chappy” has started all four matches at left back in her first FIFA Women’s World Cup while helping the side to three clean sheets in four matches while allowing just one goal ahead of Saturday’s quarterfinal match. It is a World Cup in which Canada has also defeated China, 1-0, in the opening match of the tournament on June 6 before playing New Zealand to a 0-0 draw on June 11 in their first two matches in Group A.

Canada held the Swiss at bay throughout the match, but were nearly breached 12 minutes from time when goalkeeper Erin McLeod raced off her line and made an acrobatic diving save on Vanessa Bernauer’s strike as she was played through on goal. That’s as close as Switzerland would come to an equalizer with Canada advancing to the World Cup quarterfinals for the first time in 12 years.

Canada also defeated a European side for the first time in 11 matches against such opposition all-time at the FIFA Women’s World Cup, snapping run of 10 games without victory with one draw and nine defeats.

“When you’ve got a world-class keeper and a good back four in front of them, you have a chance of winning things,” Herdman said when speaking to CanadaSoccer.com. “We’ve said this right from the beginning, if we can get that back five with a world-class keeper in place and get the front five ticking, that’s how tournaments are won. A good defense, and if you have a decent offense, you can get somewhere.”