Lowe: NBA Draft Worth the Wait for Many Tigers 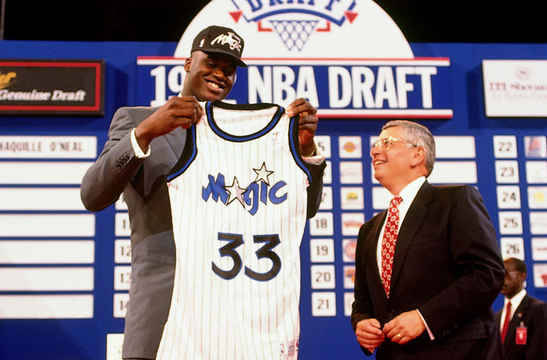 Watching “Shaq and Dale” on SEC Storied brought back many memories of the night when Shaq was pick numero uno in the National Basketball Association.

The documentary shows the announcement by a much younger David Stern in 1992 and the feigned surprise by the Shaq as his name and school were announced. He shook hands with the Commissioner and then held up the Orlando Magic jersey he would wear for the first three years of his illustrious career.

Shaq is the only LSU player to have that honor of being the first player the Commissioner shakes hands with on draft night.

But he is not the only LSU player drafted in the NBA’s first round; far from it.

Also, there have been lots of players drafted in the second round (and later when the draft had more rounds) and played in the league.

So don’t hang all your hats on where Jarell Martin and Jordan Mickey are drafted this Thursday night (6 p.m. CT, ESPN and WatchESPN from Barclays Center in Brooklyn, N.Y.). Oh there will be tension. There will be moments when you think this is the pick and then they pick someone who even the Commissioner isn’t sure how to pronounce their name.

Martin averaged 16.9 points per game and 9.2 rebounds, while making 51 percent of his field goal attempts for the Tigers last season. Mock drafts seem to have him begged in the bottom half of the first round.

Mickey averaged 15.4 points and 9.9 rebounds, but played hurt most of the latter part of the 2015 season. He is second only to Shaq as far as shot blocking and is projected in the second round of the draft, but experts also quickly say that wherever he is slotted in the draft he could actually be 10 or 15 spots higher depending on need.

There’s that word: need. Four simple letters that mean so much in any war room where coaches, executives and player personnel directors gather to discuss their choice when the moment on the clock comes.

What does a team feel it “needs” to be successful? That has a lot to do with the whole thing. Where do Martin and Mickey help a team best? That’s what it all boils down to. Not what a draft expert thinks the need is. What does the team feel the need is?

There’s talk of teams having already decided on taking Martin if he is available. If that’s the case, great for him. But in the draft world, nothing is guaranteed until it is announced at the podium. It’s the law of the draft world.

In the NBA draft, since 1952, there have been 13 first-round choices. Some you can probably easily name and others you might have to think about. The last one was Anthony Randolph in 2008 who left school after one year. He was a lottery pick after just one season of college, picked 14th.

One of the most frustrating drafts for me as a writer was in 2006. Tyrus Thomas was picked fourth by the Portland Trail Blazers which was interesting because word was Chicago wanted him and picked a player that seemingly was headed to Portland. So there was Tyrus and the other player sequestered by the media while this “deal” was taking shape in the back that everyone knew was already a done deal. Result: lots of media not happy waiting to talk to Tyrus about going to a place (Chicago) we were already expecting him to go.

In all since 1947, 52 players have been drafted that played for LSU. Again, because of draft structure in the pre-television era of showing the event, some were drafted in rounds like fifth, ninth, 11th and the 17th.

Now in the two-round draft, a second-round selection can be parlayed into something good. Brandon Bass is a perfect example. Bass was pick No. 33 early in the second round by the then-New Orleans Hornets. New Orleans management worked Bass out on the morning of the draft and made him their selection in 2005.

Although he found his niche in the league after leaving New Orleans, the Baton Rouge native and former SEC Player of the Year, is the senior member of the LSU players in the NBA. He has just completed his 10th season, now playing with the Boston Celtics. He has played 640 games with career numbers of 22.6 minutes per game, 9.1 points and 4.7 rebounds. There you go folks, a second round pick still around after 10 seasons and moving forward.

Marcus Thornton was a second round pick of Miami whose rights were traded to New Orleans. Thornton is still getting it done after six seasons. He’s now with the Phoenix Suns and after 389 games is averaging 12.7 points a contest.

As both Thomas and Thornton have shown, the team that picks you in the second round may not be the one that takes you home at the conclusion of the draft. Wheeling and dealing is part of the second round and many times it works in your benefit.

Look at Glen Davis. Glen had to sit and wait for Seattle to take him with pick No. 35. It was very stressful for Davis in 2007 as he watched his stock drop. Then Seattle traded him to Boston and coach Doc Rivers. The Celtics would win the NBA Championship as Davis played 69 games that year. He is presently back with Rivers and the LA Clippers. He has played 514 games in eight seasons, averaging 8.0 points per game.

So sit back and watch the draft with keen interest as an LSU fan and salute Jarell and Jordan as they are drafted. First or second round, the chance is surely there for them to play in the NBA in the future. Watch the summer league on NBA TV with interest to see how they do for their new teams. It’s a long process from draft to roster. Hard work and patience will be needed. Both of them have the work ethic to make it. They have earned this shot and the sky is the limit. Good luck!