Chris Blair to be Next 'Voice of the Tigers' 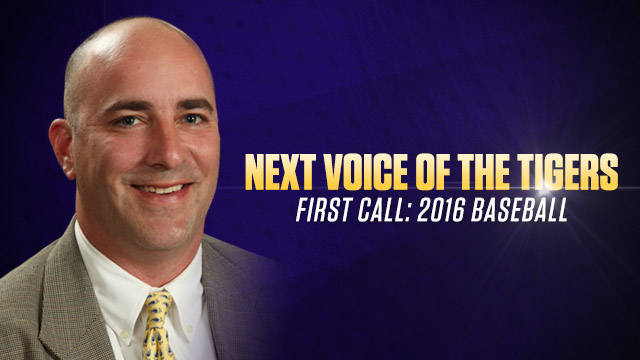 BATON ROUGE – LSU Vice Chancellor and Director of Athletics Joe Alleva announced Saturday that Chris Blair, currently the “Voice” of Georgia Southern University Athletics, has been named as the next “Voice of the Tigers” beginning with the 2016 LSU baseball season.

Blair, whose title will be Director of Radio Broadcasting, is expected to join the LSU Athletics Department in December 2015. Blair is currently the General Manager and Voice of the Eagles at Georgia Southern Sports Properties.

Jim Hawthorne, the present and longtime “Voice of the Tigers,” will finish his career by calling the 2015 LSU football and 2015-16 men’s basketball seasons before retiring after more than 30 years on play-by-play duty for three sports at LSU.

“Chris Blair is a rising star and we are excited to bring him to LSU as the next voice of the Tigers,” said Alleva. “We had many quality candidates and Chris just stood out. It’s the premier play by play job in college athletics and we’ve hired a guy who will do a great job of being the radio voice of LSU athletics. His passion, knowledge and love of radio is something LSU fans will quickly notice and identify with. We are excited to have him join our staff.”

Along with his play-by-play duties of nearly a decade for Georgia Southern, Blair handled all the behind-the scenes aspects with affiliate relations, network marketing plans and overall sound presentation of GSU Athletics on the air and on the Internet. He also hosted the weekly coaches radio shows and was the host for the weekly television show for GSU basketball.

“The incredible opportunity and privilege to follow behind the legendary Jim Hawthorne, one of the most recognized and respected voices in college sports is truly a dream come true,” Blair said. “To work and represent the most powerful brand in college athletics that has the nation’s most passionate fans is an honor and one that I do not take lightly. My family and I are excited to soon be making Baton Rouge and Louisiana our home. I would like to thank athletics director Joe Alleva and so many inside LSU Athletics for trusting me as the narrator of great Tiger moments to come.”

Blair, 40, is married to the former Amber Anders and they have two children, Crafton Christopher and Rivers Elisabeth.